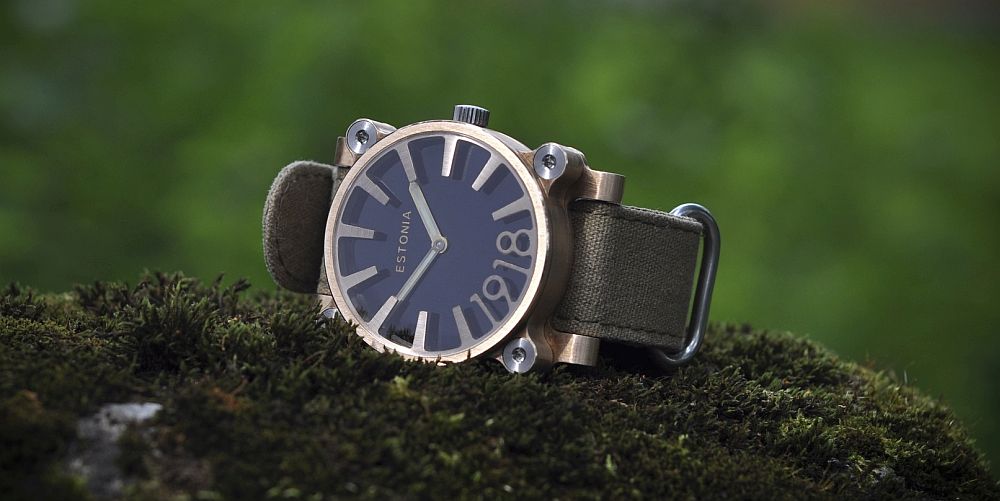 With watches, we are often curious about those that come from countries that are not particularly known for their watchmaking, or perhaps as a way of diversifying a collection to represent all those different countries.  Estonia is a small Baltic country that really is not known for watches.  We did review one a while ago, and now we have another one to add to the list of those you could be on the look for – the Wõitleja, by Estonia1918. Now, as you might guess from the name of the brand (Estonia1918), there is a historical significance here, and you would be right.  It was in 1918 that Estonia declared independence (on February 24th, for those keeping score at home).  Russia and Germany did not particularly care for that declaration, and what ensued is now called the War of Independence.  It took two years, but the invaders were driven out.  It was with use of armored trains (which I had never considered before) that helped; the Wõitleja is named after an artillery car of one of those trains, and translates to mean “Freedom Fighter”. As you might guess, the Wõitleja is being introduced to commemorate the upcoming 100 year anniversary of that original declaration – and fittingly, only 100 pieces of the Wõitleja will be made.  While I have not seen the armored trains being referenced, the watch is supposed to be pulling design inspiration from them.  The case itself is inspired by the various bronze dials used in those trains.  Made of CuSn8 (aka marine-grade bronze), the case is a two piece affair, with the front portion one piece with the indices for the dial, and the back portion sealing it up with the use of just the four fasteners. I rather like how the indices, being part of the case of the Wõitleja, really float over the dial.  Oh, and that dial?  It’s not just simple glossy black paint.  No, this is an enameled dial, created by the same firm that creates the Estonian Decorations of State – further cementing the ties to the country, not to mention it being (presumably) rather high quality.  Here again, that glossy enamel compliments the brushed bronze floating over the dial, while giving things a lovely bit of contrast. While you may not be terribly familiar with the home country of the Wõitleja, you will know about the country that produced it’s movement – Switzerland.  Ticking away in the Wõitleja is an upgraded version of the Unitas 6497-2, with 19 jewels (rather than 17 on the standard movement) and a 56 hour power reserve.  As the movement was originally developed as a pocket watch movement, it seems thematically correct to have this sort of a movement for a watch that looks back a century.  Oh, and you’ll be able to see the movement through the sapphire crystal in the caseback.  That crystal is actually twice as thick as it needs to be, in order to allow the case to not rest directly on your skin.  A nice touch for those worried about the metal leaving green marks on your skin.

We have had some early conversations with the brand about the Wõitleja, and I am rather liking what I have seen so far.  Sure, taking a gamble on a new brand like this is exactly that – a gamble.  For the adventurous, the simple construction of the case and the well-known movement means this should be a watch that would not necessarily be a burden to be maintained.  Oh, and as far as gambles go, the Wõitleja is not a particularly expensive one for a limited watch of this nature – at this time, it is anticipated that pricing will hit around $900.  Should you want to inquire about reserving one (disclaimer: serial #1 is going to the President of Estonia), head on over to their site and drop them a line.  Per-orders are starting now, and delivery should be in about three months or so after the pre-order closes.  As for us, once there is a production version ready, we’ll be planning to spend some hands-on time with the watch.  estonia1918.com