Everybody to the limit: NTH Submariner-type watches 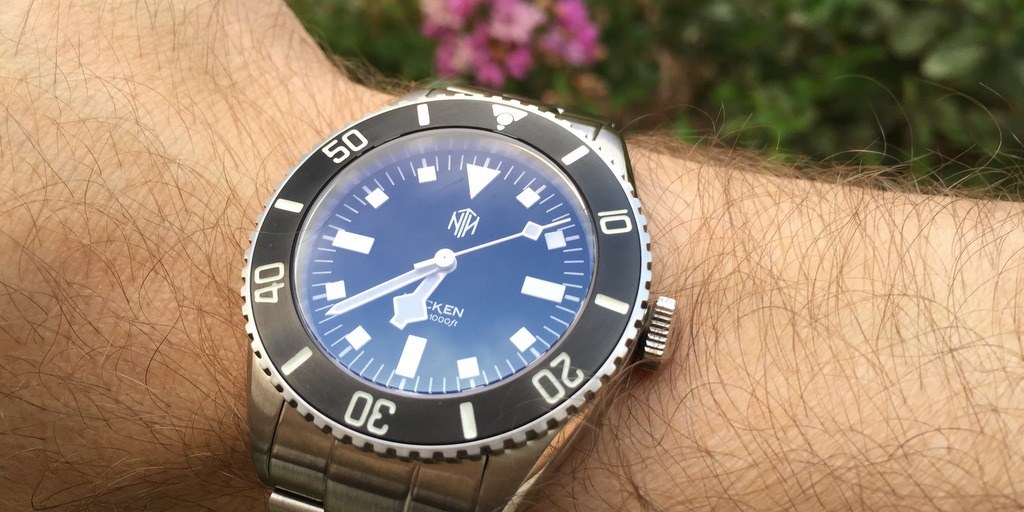 There are Submariner watches a-plenty in this world of homages and replicas, but every one in a rare while, comes a man, a man who isn’t intimidated, and his watch.  And I’m talkin’ about the Doc here. Sometimes, there’s a man, well, he’s the man for his time and place. He fits right in there. And that’s the Doc.

When Doc began designing watches, the first thing he acknowledged is, a man’s got to have rules in this world. Rules you adhere to, hard and fast, like principles inviolable. Doc’s a man of character and integrity; Not only did he make those rules, he put them out there for all the world to see. It’s no suprise some people find his conduct a little coarse for this world, but that’s just the Doc.

When Doc set out to make the NTH line, he wanted to make sure everyone knew that it sits separately from Lew & Huey, his first watch line. NTH is so-named because it means to take a design to the utmost degree. It’s also been suggested that it means ‘Nod to History,’ although that moniker wasn’t the original intention. NTH exists to take the idea of the existing submariner watches, and go further, both through honoring historical designs, and by making technical challenges for the factory that result in a better watch overall for the rest of us.

What sorts of challenges did Doc face? well, for starters, ol’ Doc knew that existing Submariner watches are as much as 12.7 to 13.8 millimeters tall, depending on model. The Tudor Black Bay is a 12.75 mm tall watch. Doc pushed to be able to submerge to 300 meters and still be waterproof. Normally, meeting the requirements for 300 meters is easy – when you have a thicker watch. Doc succeeded in this requirement with only 11.5 millimeters. He kept weight down in the process, all while using a solid link, solid end link stainless steel bracelet. On my scale, it weighs in at 145g, and the Rolex Submariner is said to weigh in closer to 166.

The dials, bezel inserts, hands and lume differ on each model. Näcken Modern is outfitted with Snowflake hands, a simple bezel insert with the numerals engraved as if it were ceramic. Snowflake hands were first used by Tudor on watches in 1969. This watch is a testament to tasteful executing and simplicity. It doesn’t even have the minutes from 00 to 10 or 15 demarcated on the bezel insert.

The dial uses applied indices that are fully lumed, and are shaped as squares at all direcion and rectangles at the 3,6,9 cardinal positions. And they have height! That’s what makes the Näcken so nicely done: it’s the attention that’s been paid to details. The blue lume is excellent, bright on the dial, bezel insert, and even the signed crown is lumed. And it’s all blue, which looks so, so good. If it weren’t for the existence of Doc’s other brand, Lew & Huey, and its Phantom A model, I’d say, ‘how much more lume could the Näcken be? None. None more lumed.’ And that would almost be true, except the Phantom A has a dial consisting almost entirely of lume.

The end result is one that is well-constructed, and every detail goes to tie the whole thing together. I’m normally very sensitive to heavy watches, and have had more traditional height and weight dive watches that I just don’t wear so much because they’re difficult to get used to. I wore the prototype model for a few weeks, and it was comfortable. I wore it every day for everything I was going to do anyway, yard work, swimming, and generally making it a part of my life.

How do I explain it to my friends, who first of all quietly tolerate my wristwatch fascination? I’ve owned bigger submariner-homages. They were high quality, with elabore grade ETA movements, the details made with care in every way, and… I sold them. I regret having sold them, but I did. I did it because I wasn’t wearing them. When I did, they were too heavy to be comfortable. Putting on the Näcken gave me that look with a thinness and weight that worked for me everyday, and I appreciate the technical and business challenges of getting the factories to deliver on the requirements rather than choosing to simply place orders for things in a manufacturer’s catalogue.

Both the Näcken and the Oberon are powered by the Miyota 9015 movement. This is the higher beat Miyota, that’s held to more accurate regulation than it’s 8215 and 82s7 brethren. Sure, the 8215 series is fine and well, but the 9015 is the higher end of the range.

Oberon? I spent a lot of time talking about Näcken, because I really fell in love with it while it was here. The Oberon uses the same case, a green tinged lume that’s vintage appropriate. Oberon uses other vintage styling cues, including writing the Oberon name on the dial in red, ala the 1680 Submariner of 1966-1973. The 1955 6536 Submariner had the 3-6-9 dial, and the same coin edge bezel shared by Oberon and Näcken.

The 5512 Submariner from 1960 also had the 3-6-9 dial. What’s unusual here is that the Oberon also has a honeycomb dial texture, which was used on a handful of Rolex models, including the 6204 Submariner of 1953. The Oberon also includes a gilt dial and hands, using the minute marker connected by an outer circle as it was on the early Submariners and early Explorer watches. All of this is to say, Oberon draws its details from the best of the early Submariner watches.

The Oberon we had was equipped with a date complication, while the Näcken was a no-date model. If you see in the photos that the date window on Oberon looks a little small, these are prototypes I was loaned, and final details like the size of the date window will be adjusted for production models. Doc has spoken publicly about how many he’ll make: “With eight different versions (15 if you count date-window options), there aren’t going to be hundreds of pieces of any of these in circulation. The production numbers for each version range from ~35 to ~100. That may end up being all we ever make.”

I need to diverge for a moment. I could have ended this review here, but there’s more I want to elaborate on. It’s easy to look at Näcken and say, “look, it’s a Pelagos homage.” If you do that, you are wrong. Pelagos has a number of traits that the NTH doesn’t, from the fact that Pelagos has crown guards, to the open chapter ring marks, or the raised chapter ring that is notched to fit around the hour indices, to the fine coin edge bezel instead of the coarse coin edge used by vintage Tudor and Rolex watches. The triangle and lume dot is similar, but the rest of the bezel insert isn’t the same at all. The lume color is similar. If you want to get down to it, the Pelagos really takes its inspiration from the 1969 Tudor 7922 Submariner. So does the NTH Näcken in a lot of ways. The NTH also borrows liberally from the ultra-rare one-year-only 7923 (not to be confused with the 7923 number given to one of the Black Bay models.) The 7923 was a Tudor Submariner powered by a manual movement, which allowed it to be extra thin… which is one of the big goals of the NTH watches. These NTH subs also aren’t going to get away without being compared to the Black Bay. If you must know, they’re 1.3 mm thinner than a Black Bay, and without the calipers it looks like more. The one trait that Näcken shares with Pelagos is the faux pearl in the bezel, rendered in lume.  Here’s a gratuitous lume shot:

If you like a vintage gilt style Submariner, Oberon should check all the boxes. It pulls together a coherent watch across several years and unique watches as predecessors. There are also four other models: Scorpene, an aviator type, Santa Cruz, an Oberon with blue bezel and white honeycomb dial, two vintage models of Näcken (textured dial, blue bezel or gray bezel inserts), and a Milsub hand variant named Amphion, in both vintage and modern garb. These watches are all named after different a different class of submarine. They’re all excellent. NTH has generously provided our readers with a 25 USD discount with the code ‘WWR’ when checking out.

The indices have height!

4 thoughts on “Everybody to the limit: NTH Submariner-type watches”