Omega Speedmasters Mark II and Apollo 11, Back to the Future 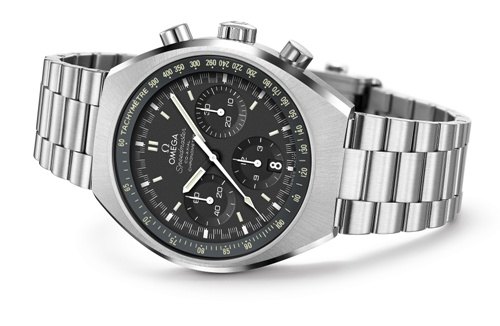 45 years ago, man first walked on the moon.  And an Omega was there.  And Omega wants you to know that.  That year, they released the Speedmaster Mark II, featuring the same movement that was in the watch worn by the astronauts.  And now it is time for an update and reissue.  The new Speedmaster Mark II retains the overall look of the original, but also provides nice modern updates. The movement is a co-axial, self winding, column wheel chronograph, calibre 3330, equipped with a silicon balance spring.  The case is the traditional barrel shaped stainless steel, with the chrono functions in the three eyes at 3:00 and 6:00, with a small second hand at 9:00.  The tachymeter bezel ring is where the visible upgrade comes in the most.  The ring scale is transparent, and an underlying ring of lume illuminates the scale from below in the dark, making is readable under most conditions.  If you want to read the full press release and see high resolution images, check it out on Omega’s web site. If you want to honor the actual achievement of landing on the moon, Omega has you covered there as well, with the Speedmaster Apollo 11 45th Anniversary Edition.  Witha production run of 1969 pieces, I would expect this to sell out and become a collector’s item.  The black PVD dial is laser etched to cut away material surrounding the marking, numbers and logo, leaving these to stand tall in relief against the actual face.  The hands, chapter markings and outer bezel as done in 18K gold and it is powered by the same manual wound caliber 1861 chronograph movement that was inside the original watches worn on the Moon.  Though the materials do not specify, from the look of it the tachymeter scale looks to be illuminated with lume from beneath in the same manner as the Mark II. The watch comes a brown NATO strap and will be available in retailers starting in June 2014, but if you want one, I would start inquiring earlier than that.  omegawatches.com