Rethinking Swiss Made: Hands-on with the Lundis Bleus 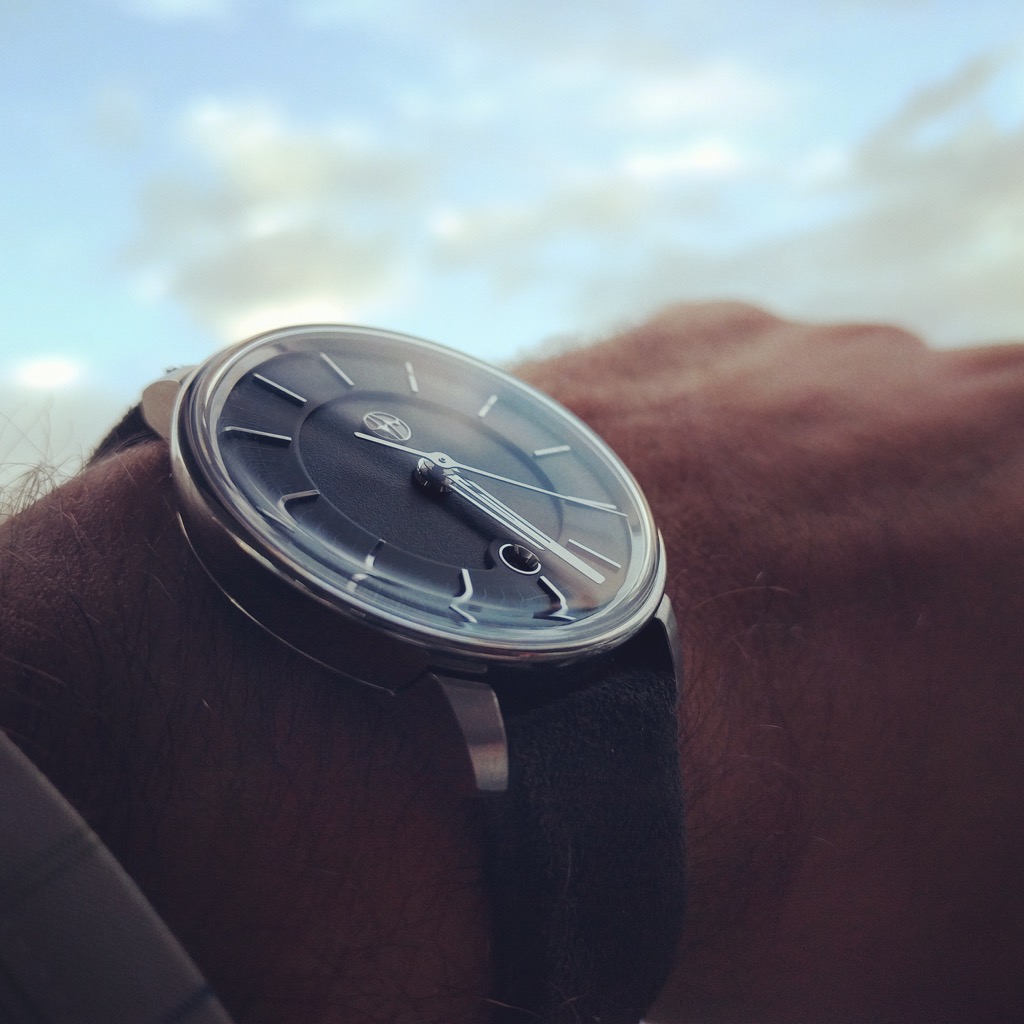 It’s a story as old as Kickstarter: Two friends get together to start a watch brand, sourcing the parts from Asia to make a three-hand watch. But with Lundis Bleus, there’s a rare twist: These two guys are legitimate watchmakers from La Chaux-de-Fonds, in the heart of the Swiss watch valley, and they are using skills honed at the likes of Richard Mille and Audemars Piguet to make a simple but unique watch. From their workshop overlooking the central avenue of that watchmaking Eden, they hand-finish and assemble mostly Asian parts to create their Ref. 1100. That handwork comes at a price: 1,350 in CHF or USD for a Miyota 9015 three-hander with date. That is certainly a lot for a Miyota, but I cannot say it is a lot for this watch because there is simply nothing else like it. 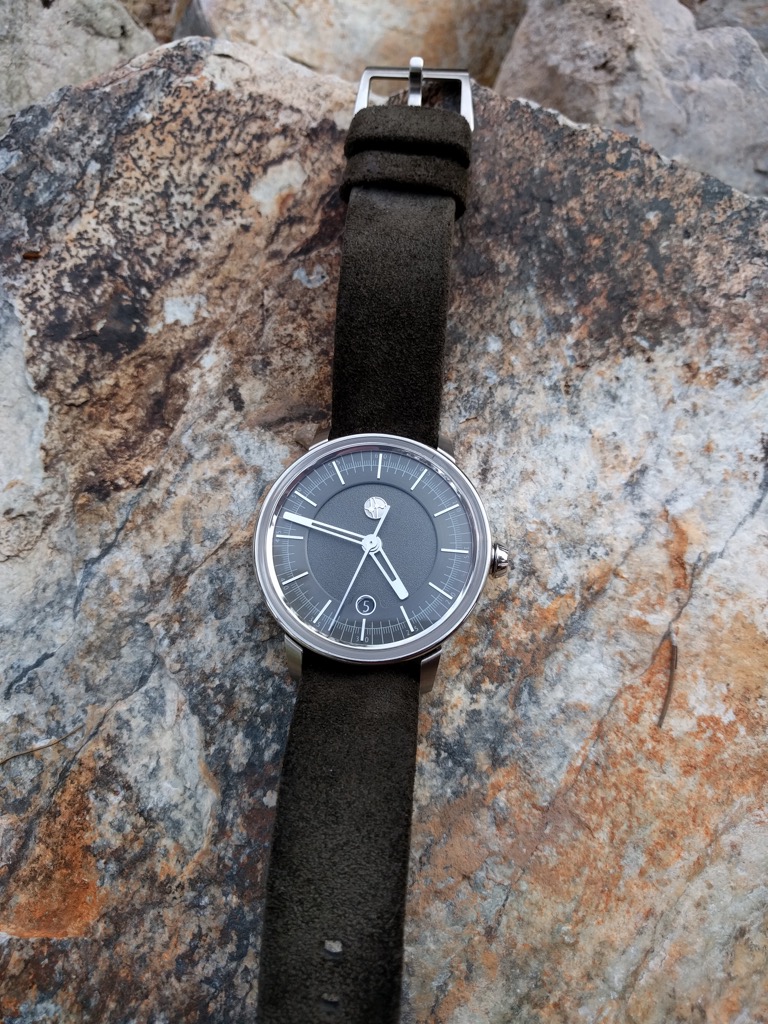 Released in November 2016, the 1100 is available in a variety of dial and handset combos, all with the date placed tastefully above the 6:00 marker. But the date is the first hint that this is not your average upstart watch. It uses a custom font on a color-matched wheel. That color-matching is especially impressive on the copper and silver dials and matching wheels. The round date window is lined from top to bottom with chrome that matches the hour markers and the handset. The effect of the custom font and the chrome is a sort of magnification illusion—the date seems bigger than average and the reflection from the chrome makes it look like magnification, but it isn’t. 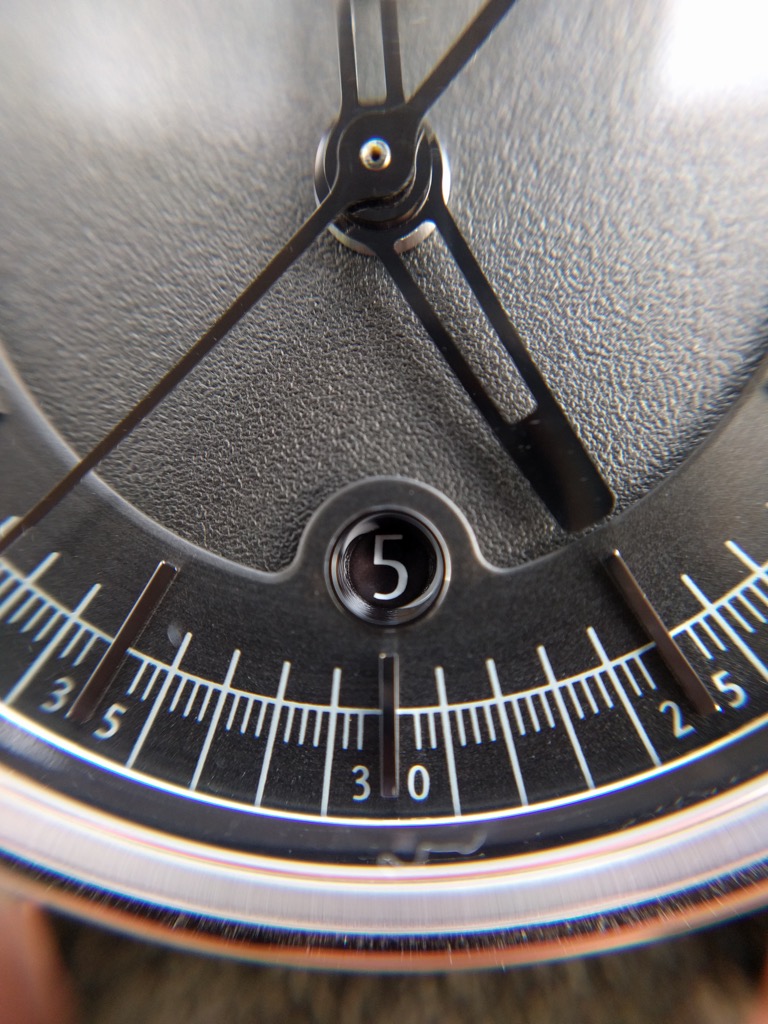 From the date window your eye jumps to the top of the dial, where the round Lundis Bleus logo is applied in perfect counterpoise with the date at the bottom. The chrome and matte logo could only ever appear on an independent watch. That’s because no corporate board would approve a stylized alcohol molecule as the company logo, but that’s just what Lundis Bleus founders Johan Storni and Bastien Vuilliomenet did here. They’re not lushes—they rush to point this out—no, the inspiration for the Lundis Bleus logo runs deeper. The name translates to Blue Monday, the day independent watchmakers once spent in the local pub after working into the late hours on other days of the week. For Storni and Vuilliomenet, the name Lundis Bleus and the alcohol molecule represent independence, both as a callback to the past of independent watchmaking and a nod to the future of freelancing, flex-schedules, and the new generation of independent watchmakers. 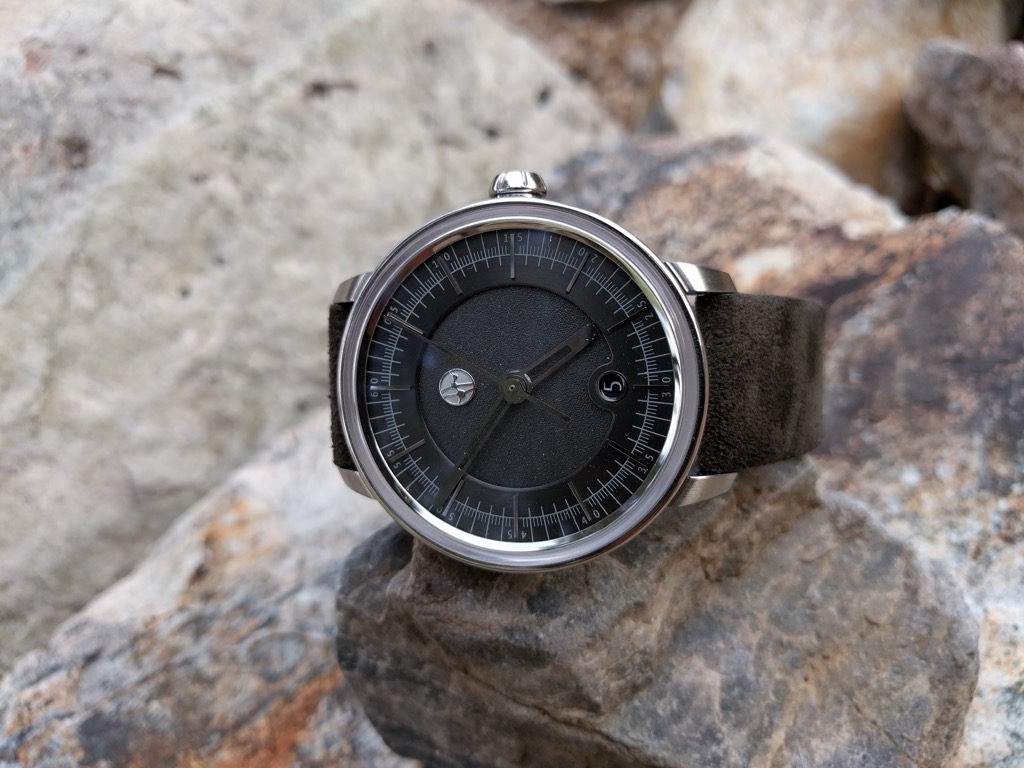 The rest of the two-piece dial picks up the logo’s circular theme, with a textured inner dial framed by a raised sunburst ring that holds applied hour markers and a printed minute index. The minute index is all business and the mix of complex hash marks and Arabic digits flanking each chrome stick hour marker give a touch of practicality to an otherwise graceful aesthetic.

The handset is one of the few areas that leaves me questioning. First the good: the handset keeps with the simplicity of the rest of the dial and its flat shape and bright polish cause it to disappear at certain angles, only to burst back into view as you draw the watch up to read. It reminds me of a mystery dial, without all the mystery. The hour hand perfectly kisses the edge of the inner dial, the minute hand lands solidly inside the minute register, and the second hand sweeps ever-so-slightly shy of the edge. But the shape of the skeletonized hour and minute hands is very blunt and left me wondering if tapering the main hands to more slender points would have been a more elegant choice. 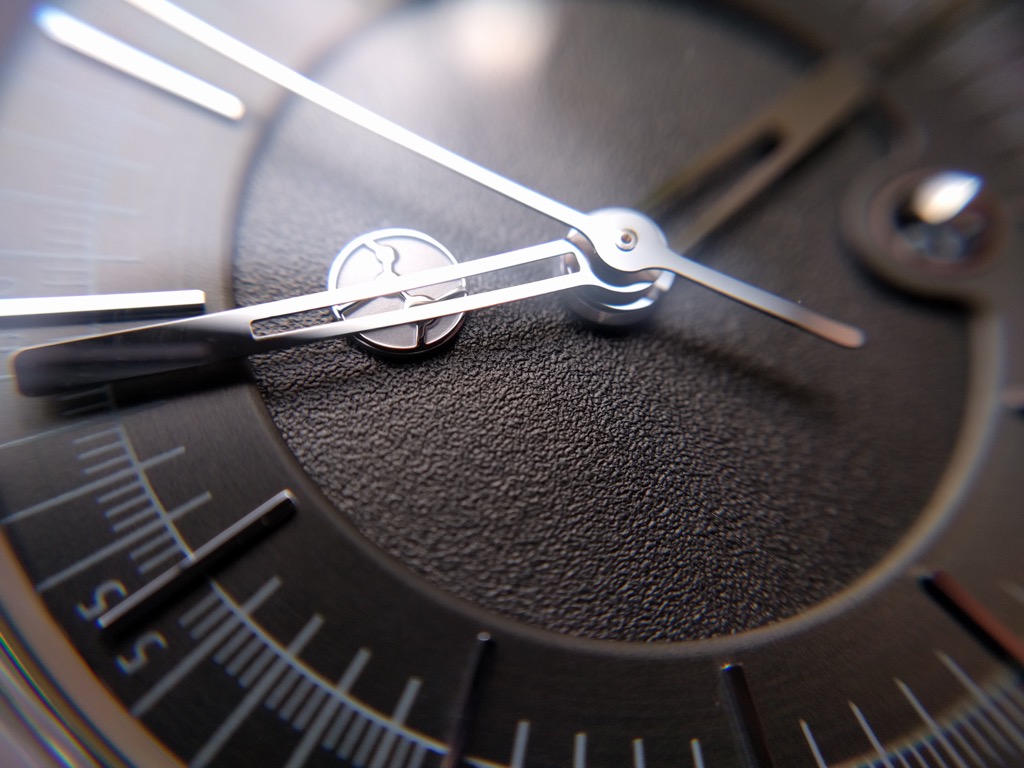 All this wonderful stuff on the face of the watch is just the start. The case, crystal, and strap are actually the parts of the watch I found myself staring at most often when a glance to check the time turned into inappropriate staring.

The crystal is a thick box sapphire with modern scratch resistance but the gauzy character of a vintage acrylic. With no bezel, the rounded vertical side of the box crystal is the only distinction between the glass and the case. At 40 mm the case is a great size for most wrists and it wore ideally on my 7-incher. 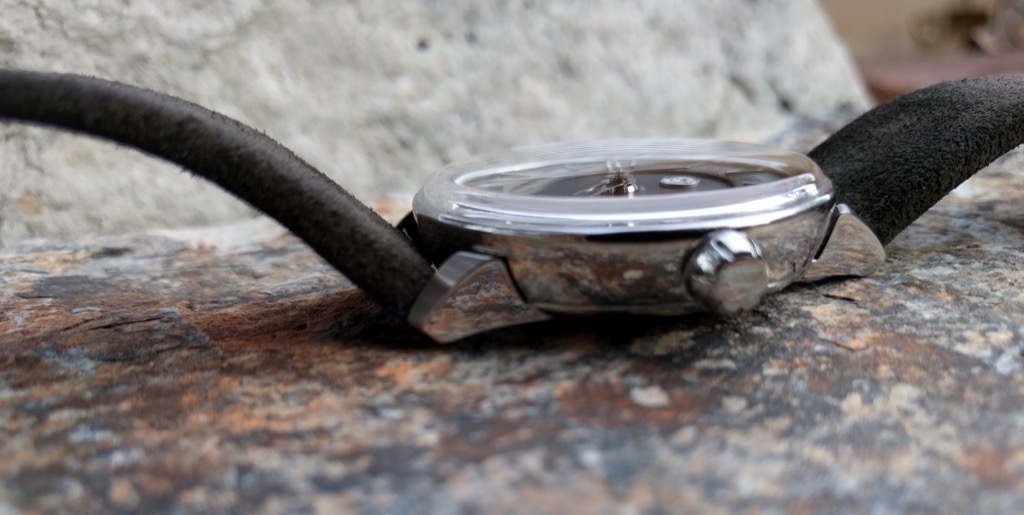 The lack of a bezel gives the case an airy lightness, as does a small trick with the lugs. The lugs are only attached to the case back, with a paper-thin gap between the lugs and the gently tapered bowl-shaped top case. The floating lugs are a subtle illusion that comes across as a cohesive design choice rather than a gimmick. In fact, the lugs are best appreciated from a side angle, where the illusion is revealed but so too are the polished sides and brushed tops of the curvy wedge-shaped lugs.

A thick suede strap with a brushed tapered buckle fills the lugs. I found the strap instantly comfortable but it is probably a bit short for larger wrists. The choice of a 19 mm strap is odd, but I’m not sure why you wold ever take it off this excellent suede strap so the unusual proportions aren’t cause for pause. 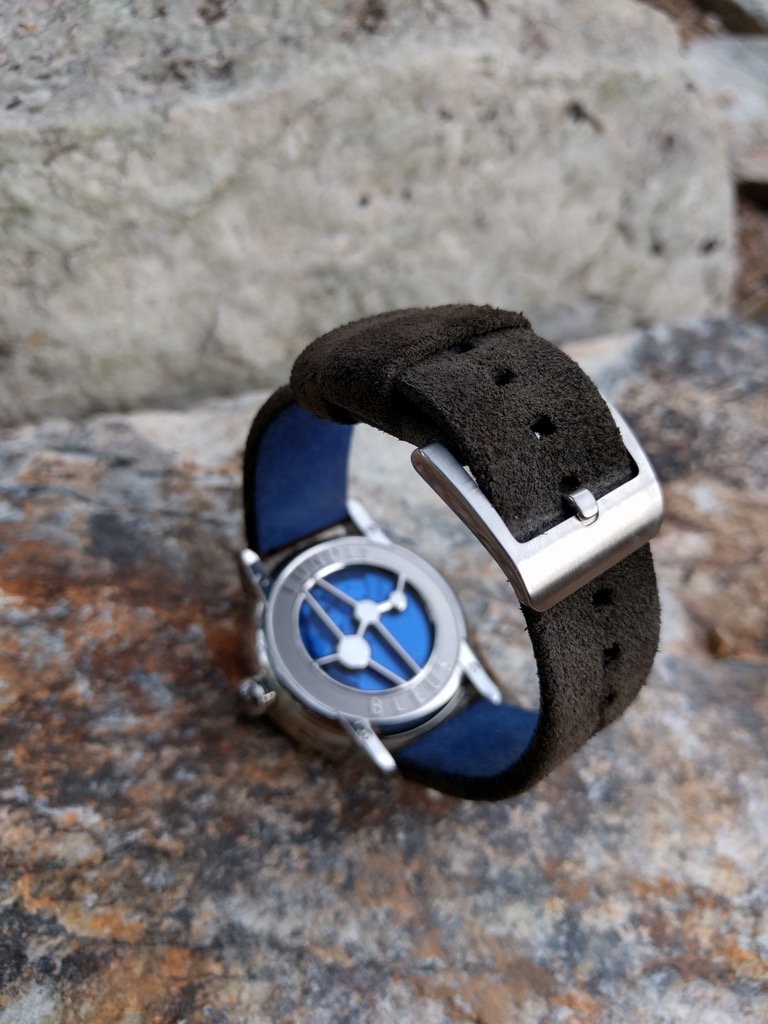 The case back repeats the molecule logo from the dial, but the portions of the logo that are brushed on the front are tinted glass on the back, revealing some of the Miyota 9015. Much of the movement remains hidden behind the logo, but you can see the beating balance wheel and pad-printed rotor (although they should probably save the ink for what little the printing adds). 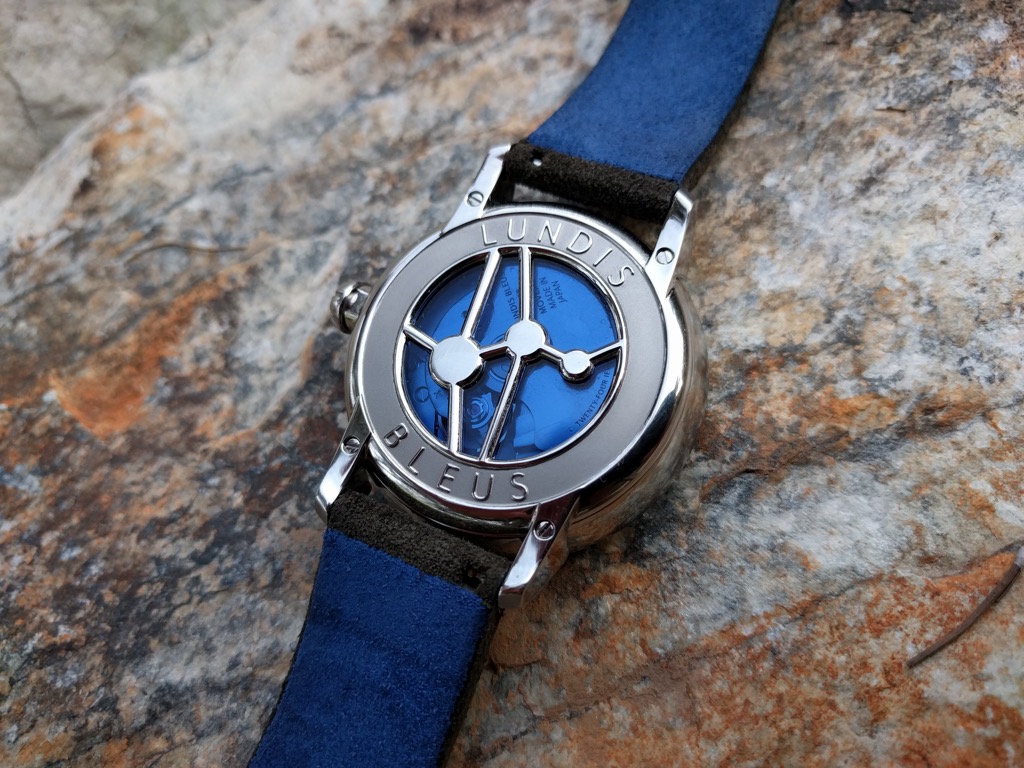 The Miyota 9015 is ubiquitous in independent watches and there is really nothing to complain about beyond the occasional clanging rotor. Lundis Bleus even takes the time to regulate each one. The movement is controlled by a stout mushroom-shaped crown that is surprisingly useable thanks to seven deep grooves. But the story of this watch is a deliberately Swiss one, that starts in an atelier above the Avenue Léopold-Robert. So why not have a Swiss movement to complete the picture? At this price point it seems reasonable to spec an ETA 2824 or a clone like the Sellita SW200 or the new STP1-11. 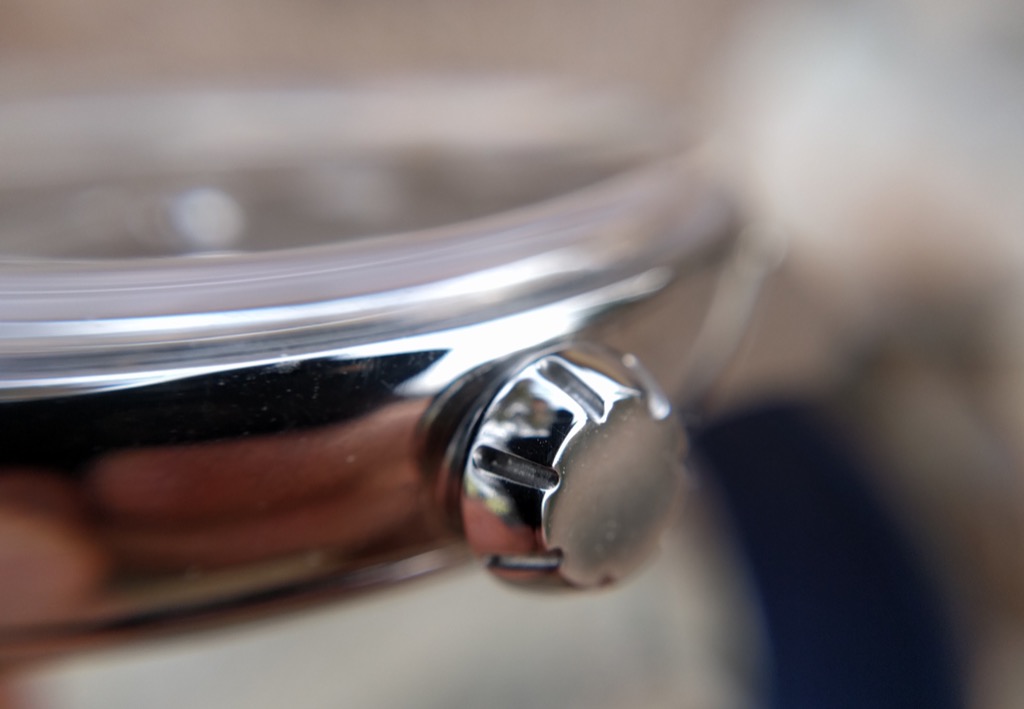 But that’s really a silly quibble. What does it mean to be “Swiss Made” in this global watch economy? It’s no secret (if an unstated one) that plenty of “Swiss” watches source their cases and more from China. And the robots building the STP1-11 in Switzerland aren’t really any more Swiss than the robots building the 9015 in Japan. It is practically impossible—if not physically—to build a sensible watch entirely within a single country. H. Moser & Cie’s belligerent $1 million Swiss Mad watch drives this home; it is intended as an entirely Swiss Made watch, but there are no gold mines in Switzerland so they made the case out of swiss cheese. Literally. Moser meant this as a commentary about the dilution of the Swiss Made brand, but it says more about the interconnected nature of the watch business. Moser objects to the new 60% Swiss Made standard as too lax, touting their own 95% as truly Swiss. But why not 96%? Why not demand 100%? Moser has no answers. Lundis Bleus isn’t labeled “Swiss Made” but it’s every bit as Swiss as a Shinola is American. I know the FTC disagrees, but when I see a Shinola, I think of my hometown, no matter where the quartz movements come from. When I look at the Lundis Bleus, I think of a small studio in La Chaux-de-Fonds. Because a “country of origin” designation based on percentages and “transformations” is just an arbitrary and objectively meaningless sop to tribalism and mercantilism. Let’s celebrate that Asian manufacturing perfection and Swiss design smarts can create a watch like the Ref. 1100 and leave it to watch buyers to decide what it means for a watch to be “Swiss Made.” I’ll always think of the Ref. 1100 as Swiss because that’s where it started and that’s where it was built, regardless of which robots assemble the movements. lundis-bleus.com

One thought on “Rethinking Swiss Made: Hands-on with the Lundis Bleus”