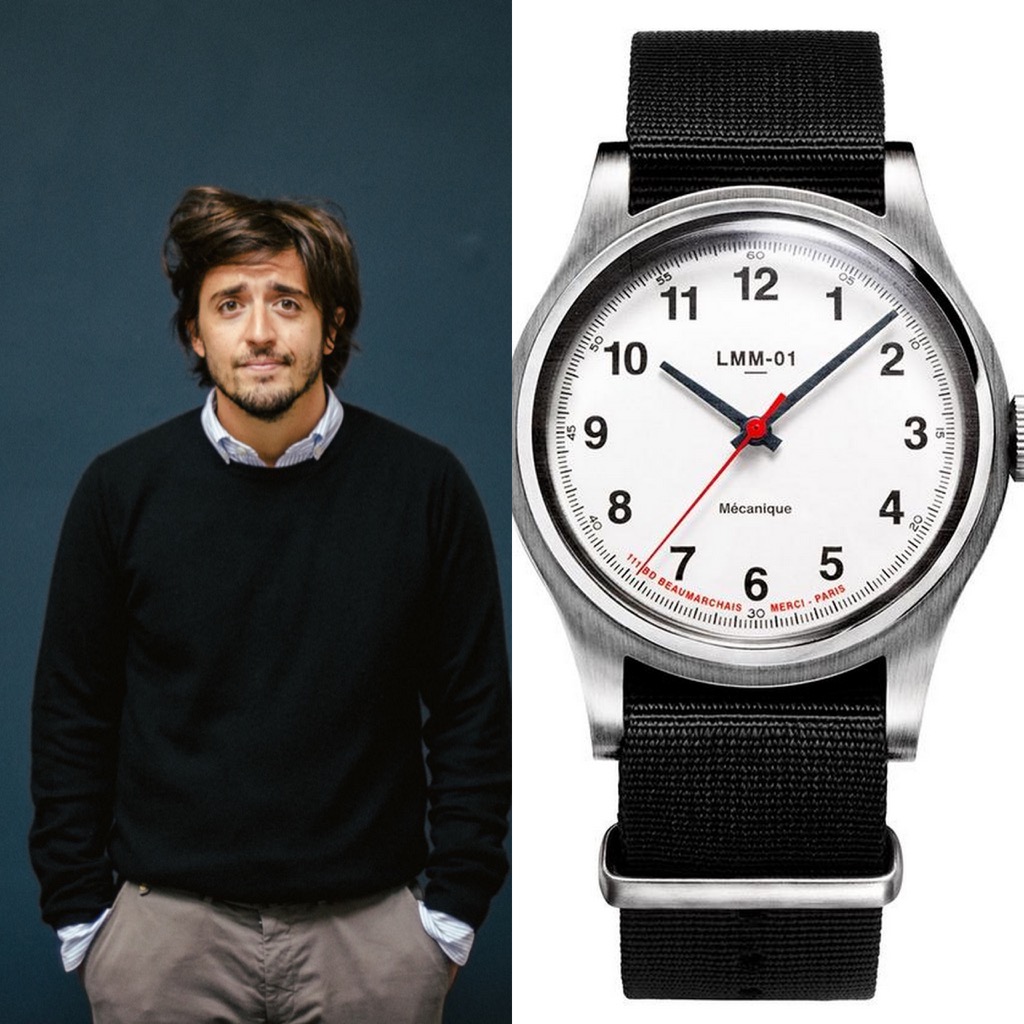 If you’re like me, that review we did a little bit ago on the Merci LMM-01 sort of came out of nowhere.  Unless you’re local to Paris or travelled through there, I’d say it’s even money that you had never heard of Merci before.  I, for one, am glad to have learned of them.  Though, one always wonders when a new watch pops up out of nowhere, particularly when driven from an already established store.  So, to that end, we conducted a quick interview with the CEO of Merci, Arthur Gerbi.  Read on to learn how he decided that now was the time to introduce the LMM-01 to the world.  As it turns out, he really is a watch guy at heart, from an early age.

WristWatchReview (WWR):  Can you tell us a little bit of your background, and how you came to the helm at Merci?

Arthur Gerbi:  My name is Arthur Gerbi, and I am 32 years old. I was born in a very entrepreneurial family in the fashion industry.  While I ultimately went to business school, I have always been attracted to design, architecture, and fashion.

WWR:  Can you paint us a picture of where Merci fits within the retail space?

Arthur Gerbi:  This is a hard question to answer. Merci is the opposite of the retail paradigm. We opened in the middle of nowhere on the Boulevard Beaumarchais (which is now – thanks to Merci – one of the coolest neighborhoods in Paris).  Surprisingly, we also don’t have any windows on the street.  In place of windows, we have our “coupole” where we exhibit every month a trend we see in the society.

Past anything retail-related, Merci was also born as a project to develop an education project in the south east of Madagascar. We support since our beginnings an association called ABC Domino.

WWR:  So, there are quite a variety of unique qualities to the brand – to which you just recently added the LMM-01.  Why did you decide that now was the time to design and release your own watch?

Arthur Gerbi:  Upfront, I must be clear – this has been a longtime project for me. I felt there was too much of everything on the market, and really not enough watches that had educated references. Past that,  I still don’t understand the connected watch (ed note:  smartwatches). Wanting to be connected to everything disconnects us from what is the most important. So, we went the opposite direction.  We wanted to make a watch that connected to the most important thing: the present moment.

WWR:  That’s quite a purpose statement for the watch, but it does give things a focus.  With watches – in general – how would you say they have figured into your life?

Arthur Gerbi:  I fell in love with watches very early in life – around the age of 7. Then there was the day I discovered on my older brother’s wrist that his watch  (a Rolex Explorer II) was not doing tic-tac with a 1hz beat but titititititi with a 4hz beat?  That was a revelation for me. The beauty of that connection to time remained anchored in my mind. For me this, little second hand beating at 4hz represented the best of craftmanship.

WWR:  It is tremendous how we can hone in on the smallest of details, like a second hand, and have it define a watch (or watches) so precisely for us.  What watch, or watches, would you say influenced the LMM-01?

Arthur Gerbi: Maybe all of them! I am passionate about watches; I can honestly say I love all watches. By way of illustration, when I meet new people, I remember what watches they are wearing, and how they are wearing them. (ed. note:  who hasn’t gone watch spotting in public?)

But back to your precise question.  The case was inspired by military models of the 1930’s. The dial was inspired by train station clocks and off course field watches of the same time.  In the end, it was important that LMM-01 was a true Tool Watch.

WWR:  And that was something I definitely picked up.  In our own review, I was drawn to the rugged yet elegant simplicity of the LMM-01.  Aside from your own watch, what others do you have in your collection?

Arthur Gerbi:  I love vintage swatch from the 80’s and 90’s. I have a fantastic Longines Marine that I love, as well as  a vintage Longines diver.

WWR:  We can’t see anything wrong with those choices!  Past what you’ve acquired, is  there any particular watch that you would consider a “grail”?

Arthur Gerbi:  Of course – there are many of them!  First off, I’d mention the  Longines 30CH with Luminova hands.  For another specific model, I like the Nivada Grenchen Datomaster.  Then, to round it out, I’ll cast a very wide net and point to any pre-Daytona Rolex.

WWR:  Well, with all those options on the grail list, I’m certain at least one will land on your wrist some day!  Let’s turn back to your own watch.  What’s been the biggest manufacturing or engineering challenge you faced so far?

Arthur Gerbi:  The glass of the watch was quite a subject of concern.  We wanted to have a watch with a curved mineral glass. As we started out, our Swiss manufacturers had quite a hard time with this requirement. We finally found a factory in Switzerland that could make it.

WWR:  That’s intriguing – of all the parts of a watch, I would not have pegged the crystal as for being a difficulty.  But, as you mention, it’s a different shape than we’re used to seeing on most watches.  With the LMM-01, what would you say defines your watch? What characteristics are identifiably “Merci”?

Arthur Gerbi:  We want to make watches that have something to say, that bring something unique to the market.  Doing a step case watch in 2018 – when all the competition is focused on the design of the 1960’s and 1970’s – was important for us.  And, in some ways, it was also an act of resistance!

We tend to think that being a forerunner in, terms of design, is important for us. As a company, Merci has always been at the beginning of trends. If we launch a product, like the LMM-01, we just don’t want to be riding in on a trend.  We actually want to try to start something new.

Finally it is important for our client to make a product with educated references.  In other words, we want our product – though new – to have ties and nods to what preceded it.

WWR:  In my book, you’ve succeeded there, for sure.  Were you surprised to see the LMM-01 on the wrist of President Macron?

Arthur Gerbi:  What a surprise to discover that Mr Macron was wearing a LMM-01 with a mechanical movement!  When we went to Switzerland in 2014 to start the design of the watch, all the factories we met with thought we were crazy.

Arthur Gerbi:  It may surprise some, but doing a mechanical watch – one that is Swiss-made – was not actually the direction of the market. Everyone at the time was focused on the smart watch.  For us, though, the mechanical component was key.  We thought from the very beginning that winding a watch could be a gesture that corresponded to our time, and tied us to the moment.

WWR:  Back to the surprise of the LMM-01 being on President Macron’s wrist.  How do you think that “celebrity endorsement” has impacted the interest in the watch?

Arthur Gerbi:  The watch was a success from day 1, even before this.  That said, the fact that even the president of France – one of the most important leaders in the world – took a few seconds each day to wind his watch was a real point of pride for us.  It’s also a true proof of concept for our project! Weout of stock at the moment, but are taking orders on our website.

WWR:  When it comes to design (both watches and other offerings from Merci), what are your guiding principles when making design choices?

Arthur Gerbi:  We focus on making a product that is not a copycat of something else, but brings a reflection in terms of usage and design.  We also always want to do something with educated references.

WWR:  How do you think about design and its role in your life?

Arthur Gerbi:  I think it is a very important subject. Design is the most beautiful when it has a meaning. This shows in the LMM-01 – we love our watch because it is a true tool watch.

WWR:  What would the crowning lifetime achievement be for you and your brand as a company?

Arthur Gerbi:  Rather than an over-arching goal, we just keep looking to the future.  Merci is a project-driven company; the next project is where we look forward to.

WWR:  Do you think that you will create other watches in the future?

Arthur Gerbi:  I think for us it is just the beginning.  merci-merci.com