The ESQ 0154 has some flash for just a little cash 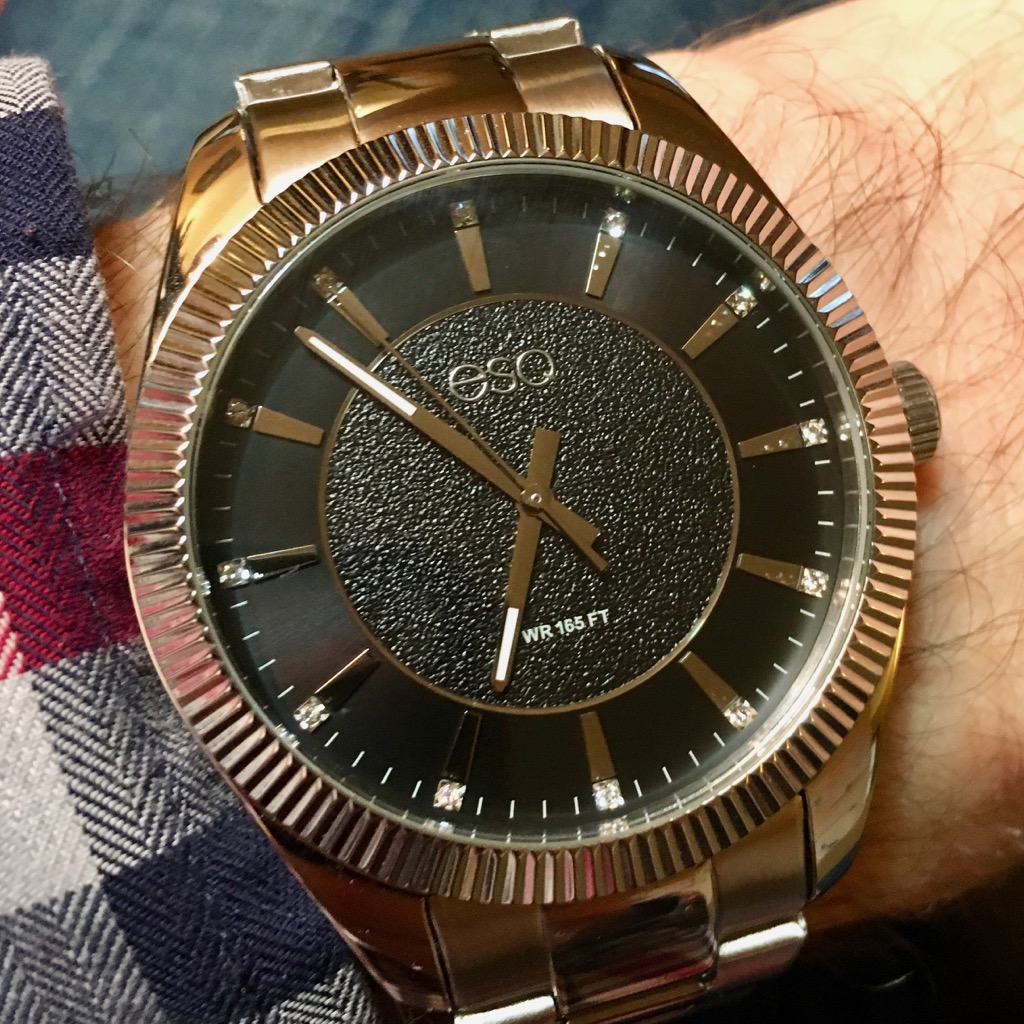 Quick show of hands – how many of us got our start with watches with one that came from a department store?  There’s no shame in it – that’s where my first watch came from, and when you’re starting out, you’re not into the details of what’s inside, you just know what you like the look of.  And hey, if that still holds true today, more power to you (and glad to have you along for the ride).  Given that, it makes sense that we can (and should) take a look at watches that are considered department store watches.  Such as, say, today’s watch from ESQ.

I wish I could tell you a nice name for the ESQ watch I spent time with, but it only has a model number – the ESQ 0154.  Of the options we had presented to us for various reviews, this particular ESQ caught my eye because of it’s bezel.  I’ve lately become enamored of the fluted bezel on the Rolex DateJust, and while this one is not quite the same, it’s very much of the same vein.

You could say that Rolex inspiration continues onto the simple stick handset (with a smidge of lume) and the bar indices.  No lume on those, but you do have small crystals at the end of each (not diamonds, not at this price point) that give you a bit of sparkle.  In fact, that’s one of the major plays this ESQ has – how it catches light.  You’ve got those crystals, the polish on the hands and indices, in the bezel, and down the center strip of the bracelet.

In other words, this ESQ watch tries to bing some flash to things without being overly flashy, if that makes sense.  To soften that up a bit, there are plenty of matte surfaces. The outer edges of the bracelet are brushed, and the dial is, as a whole, fairly flat, thought the center section has a texture to it.

This particular ESQ is much lighter than you’d expect for a 41mm steel watch on a steel bracelet.  Some of this is due to the quartz movement (they’re generally lighter than mechanicals), but it’s also due to the bracelet.  Here, the bracelet is of the hollow-link variety (most obvious when you size things and can see the inner edges of the links).  In practical purposes, that means you do get a bit of a jangly noise to it if you shake your wrist.  As to whether or not you find that annoying, well, that’s up to you.

Things like that hollow link bracelet show that the ESQ is designed to a pricepoint, which in this case is $120.  Which makes this the sort of watch that someone might come across looking for a nicer-looking watch for dressier occasions, or perhaps their first internship, that sort of thing. For me, I wore it to the office, and I wore it with a suit, and it blended in just fine.  Yes, I knew what I had on my wrist, but a casual observer is likely to think it a more expensive watch.

Finding an ESQ, should you be on the hunt for one, can be tricky.  They really don’t have a web presence, even if they are coming from Movado.  Even that list of tech specs down below?  Not “officially” from the brand.  I scraped them from the retailer that carries the watches, in this case, JC Penny (now there’s a name I’ve not heard in a long time).  While watch geeks may turn their nose up at watches that are (in this case, literally) department-store watches, I think there’s a time and place for them.  I had a Fossil with somewhat similar styling that I wore for many years, and was my dressiest watch for a long time.    So, while the ESQ may not be everyone’s cup of tea, I say if you like it, go for it and enjoy it.    jcpenny.com