An early review of the Roebuck Diviso 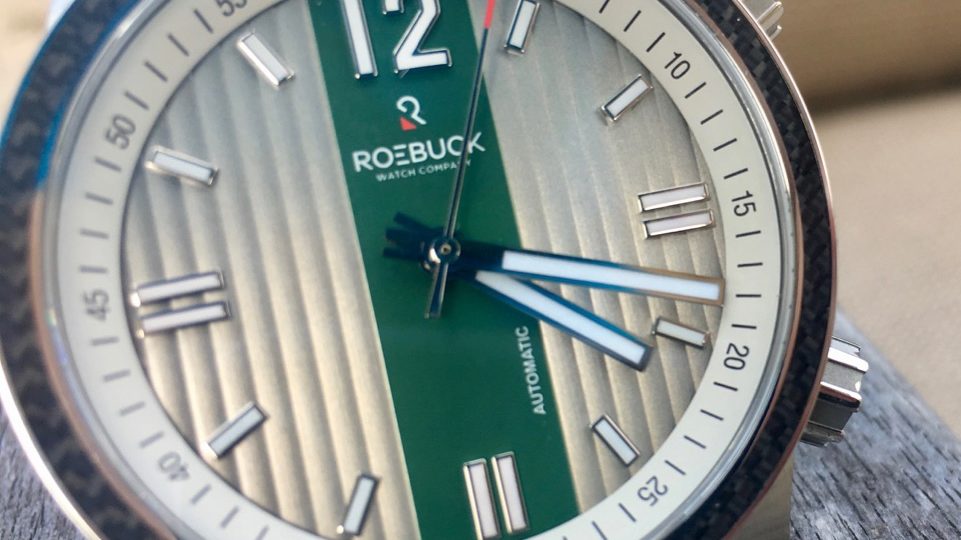 One of the best parts of being a watch reviewer is getting to see a brand grow and create new stuff. Secondarily to that, getting to see sneak previews of things, or even going hands-on with prototypes, is just an added bonus. In the case of the Roebuck Diviso, it’s very much the latter. This is a watch design still being refined, and we got to spend some time with it so you’ll know what to expect when it comes available to purchase.

So, why call the watch Diviso? It’s Italian for ’split’ and, as you can see, the dial is cleanly split down the middle. Flanking the center stripe, you’ve got a patterned dial that calls to mind the corrugated metal you can find as a roof, siding, or even just plain ol’ decorative treatments in a restaurant. Or, if you find yourself in a more watchmaking mood, you could view them as Geneva stripes. As you recall, that was exactly what was done on a Mido watch that we reviewed. I liked the effect there, and I like it here as well.

While the corrugation effect is subtle on the dial of the Roebuck Diviso, the colorful stripe down the center helps to make for a stark contrast that helps it pop out a bit more. Speaking of colors – while we reviewed the green and grey version, there are three others planned. A black/silver, a white/black, and then what will surely be a popular one, an orange/blue combo that looks very much like Gulf livery to me. Whatever the color, it makes for a striking dial – and there’s a lot of dial, as it’s a 42mm case with a narrow bezel.

Dial-wise, everything feels proportioned just about right. Particularly, the handset of the Roebuck Diviso is perfect, according to my finely calibrated eyes. They large, but they don’t overpower the dial. They’re lumed, but the stripe is done in a way that doesn’t make you only see the paint. In short, they’re everything that you want of a handset, quickly pointing out the time and just fitting perfectly into the watch they’re on. The applied indices are pretty close as well. They’re well-lumed and stand out from the dial, they could just do with being a touch larger, I feel, to more closely match the proportions of the hands.

You’ll notice a more prominent chapter ring set above the dial of the Roebuck Diviso, and that is due to an internal rotating bezel you’ve got there. It’s bi-direcitonal, and controlled by the upper crown on the side of the case. This, of course, allows you to do some on-the-fly timing. Not so much for diving, as neither crown screws down, so you could very easily bump your bezel off it’s mark and miss your marks. For less sensitive things, though, it’ll get the job done. Now, if the production version sees the crowns being able to be screwed down (or even just being able to disengage the top crown from the gears turning the bezel) then it’s a different story.

Around the back of the Roebuck Diviso, you’ll have a solid casebook that’s engraved with the Round Rock Water Tower. Definitely not something you see every day, and gives the watch just a bit more character. Tucked under that caseback is a non-date Miyota 9039 automatic movement. You’ll also notice in that caseback shot that the strap comes with quick-release spring bars. I’m a fan of seeing that coming more as a standard option, as it makes strap changes so much quicker. In this case, the stock strap is fairly nice. It has a rich leather scent (so it’s some quality stuff), though I did notice some wrinkling in the top surface, so longevity of that two-part construction may come into question.

Wearing the Roebuck Diviso is a fairly easy proposition. With the case only measuring in at 12mm thick, it’s a simple thing to slip under a cuff. When it pops out, you’ll have the light catching on the polished bezel and edge accents of the case, while the other brushed surfaces absorb it a bit more (yup, I’m a fan of alternating case finishes as well). You’ll also have light catching on that bezel insert as well. Roebuck could have gone with a simple bit of polished steel, but instead went for the look of a carbon fiber insert. Not quite the same as we saw with the luminous carbon fiber stuff from Rune Refinery but a similar idea. And you know, it sort of quietly reinforces that subtle racing nod that is hiding in plain sight with the watch.

While the prior Roebuck watch never made it to production it feels (and sounds, from the discussion) like this one has been moving along better in the production process. When the Roebuck Diviso goes live on their website (anticipated in November 2019) the expected price is $600. This is a high mark to hit, particularly with a Miyota inside. Then again, I’m not privy to all of the pricing and budgeting issues with launching a new watch, and perhaps we’ve been spoiled by the idea of earlybird pricing in the crowd-funding world. And on that note, the Roebuck Diviso is most definitely not a “pick your parts from our stock catalog and we’ll build it” sort of watch. You can tell thought went into this design, and I, for one, am hoping it sees the light of day. roebuckwatchco.com