Going Tactical With the Torgoen Scorpion 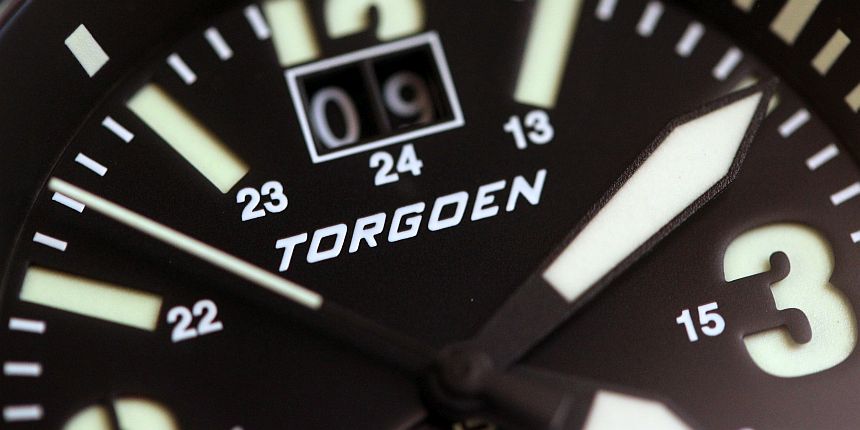 Torgoen is not a brand that is a stranger to our pages.  Most of the watches that we have written about from the brand, however, have focused more on aviation-related styles – and that makes sense, as that is where the brand started out.  What we have for you today, in the form of the Torgoen Scorpion, takes much more of a tactical watch feel. While the Torgoen Scorpion is indeed a change of overall style, it still packs in a lot of functionality courtesy of the quartz Ronda 6203B movement packed inside, and we’ll get to those in a moment.  Let’s talk about the looks of the watch first, as this is a bulkier take on Torgoen styling.  In fact, when I first saw the photos, I asked the brand if they had some sort of relationship with MTM, as there was a very similar feel to it.  I was assured that this was not the case, and things were truly their own design, even if the rounded-square case with the faux-fastener details are reminiscent. Let’s talk about those faux fasteners.  The ones on the lugs very obviously are, as you have spring bars holding the bracelet (or one of the two other included straps) in place.  As to the ones on the face of the watch, those are actually functional fasteners.  No, I did not take a wrench to the watch – I simply inquired with the brand about it.  Those fasteners, along with breaking up the top surface of the watch a bit, also serve to hold that top plate in place.  It’s an interesting detail, though between the hex heads and the edges of the plate, you will need to ensure you keep the front of the watch looking clean. Under the sapphire crystal, things are kept very clean and tidy.  Which, for as much text as there is, and as large as the indices and numerals are, is surprising.  Sure, the 43mm case helps in some regards, but it you have to commend the brand for doing a good job with the Torgoen Scorpion.  The indices and numerals on the sandwich dial are large and in charge, which helps to minimize the smaller 24-hour numbers (which are not lumed) printed on the dial under them.  Combine this with the decently-sized handset (and black-and-white color scheme) and you have a watch that is a snap to read the time at a glance.  The sub-dial where the second timezone is tracked is a touch more difficult to read, but that’s more due to it’s size than anything else.  The date display, up at 12 o’clock, is also rather simple to read.  It is not the largest two-digit date display I have encountered, but it is definitely simpler to read than a small single-window display. That date window also manages to cut off the 12 o’clock numeral, which is unfortunate.  For as clean as the dial is otherwise, I would have much preferred to see this as a smaller indice (perhaps a double-slash to differentiate it) much like we have down at 6 o’clock.  To offset that a bit, there was a pleasant surprise in the compass bezel.  While this is not movable at all, it is lumed.  While I am unsure of the practicality here – given that you likely are not orienteering using your watch at night) it is fun to have the little bit of extra glow.  Perhaps this would be better served as a 24-hour bezel, which would then add a third time zone to the mix on the watch.  Oh, of note – the internal 60-minute bezel does indeed rotate (controlled by the upper crown) so timing an event is easily done. Speaking of thirds, the Torgoen Scorpion has three different strap options.  While the 5-link bracelet was my favorite, it also comes with a polyurethane strap (which had one of the more unique keeper methods I have run across) and a rather robust nylon strap.  On that, the nylon is not some flimsy piece of textile, either.  It’s a padded strap with a leather backing and it feels like it is fairly robust.  Of the three straps, this one is the stiffest (due to its thickness), but I imagine it would work quite well when worn with some frequency and is broken in. In terms of wearing the watch around, I really did not encounter any issues.  Weight for the Torgoen Scorpion is 120g (on the textile strap), 122g on the PU strap, and tops out at 216g on the bracelet (which was a touch lighter once I adjusted it by removing links).  This means the watch is not a lightweight, especially on the bracelet, but it is manageable.  While the 43mm case size does not seem all that large on the spec sheet, it definitely carries a lot more visual bulk on the wrist given the wide topside of the case and overall dark hue.  For its angular nature, I did not encounter any issues with it hanging up on a shirt cuff. In the end, for as clean and simple as the Torgoen Scorpion is, it carries a lot of visual punch given the large modified cushion-style case.  At an asking price of $730, it is on the upper end of what we have reviewed from the brand.  While you might argue that a quartz-driven (Ronda 6203B) watch commanding this pricing is a stretch, but that’s not the case this watch makes.  While it’s true that the movement enables the large date display and second time zone, it is the functions itself that set the watch apart from others in this price range.  Yes, there are some design tweaks that could stand to be made, but they are minor.  While I do not know that the Torgoen Scorpion is a watch for me, personally, it is a solid entry into the brand’s catalog, and one that will no doubt appeal to those who would like a beefier special ops-inspiredwatch. torgoen.com