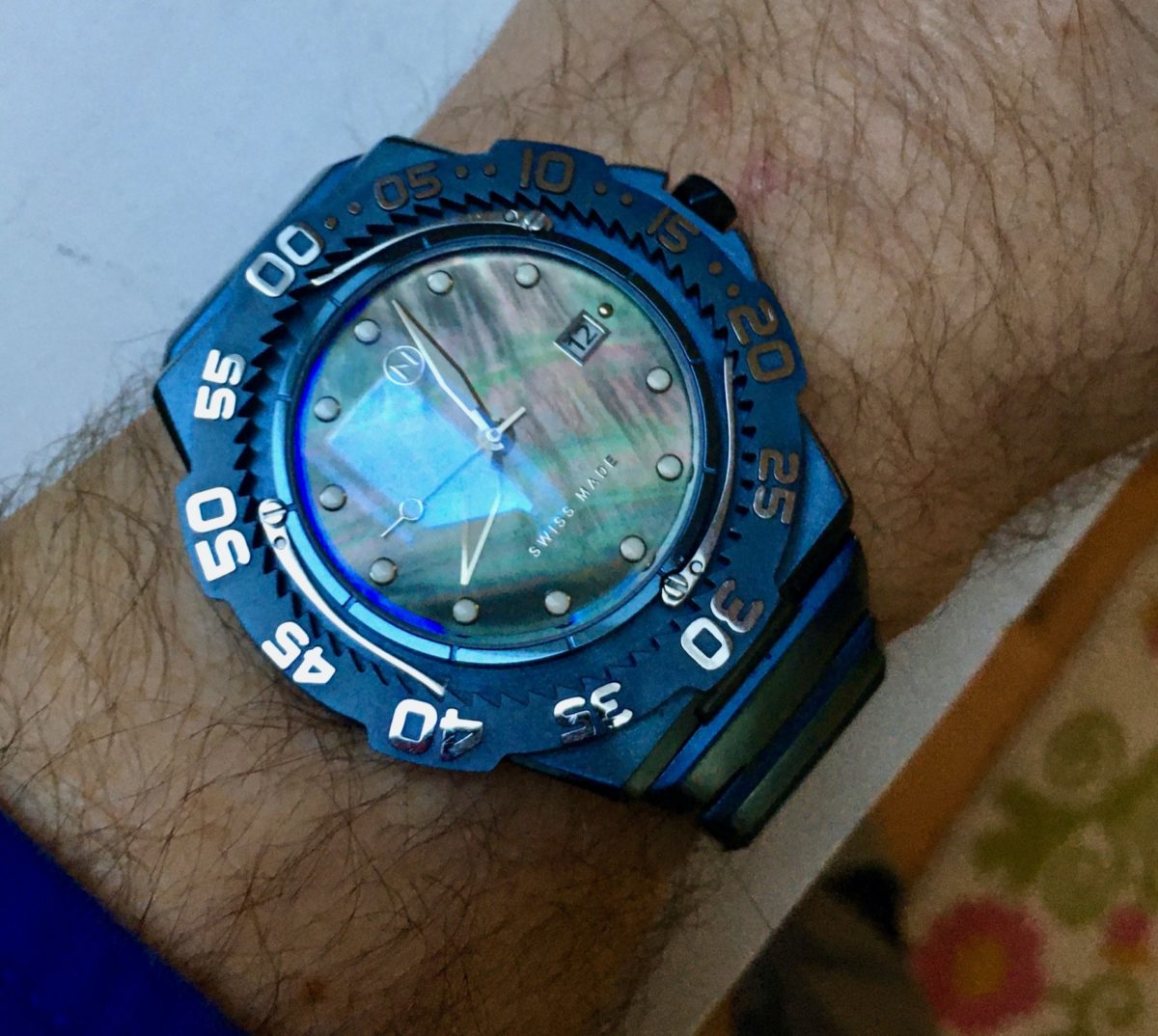 Do not be deceived – you are not seeing a duplicate review. Not that long ago, Victor reviewed the quartz version of the Nove Trident (seen here), but this time around, we’re talking about the Nove Trident Automatic. That’s the watch we brought you word of here. Well, there’s still a week to go on their funding campaign, so let’s see what you’ll be backing, shall we?

Now, to be sure, the Nove Trident Automatic looks an awful lot like the quartz version – and that’s a good thing. One major difference is that the overall height of things has gone from 6.8mm (on the quartz) to 13mm (on the automatic). That said, this watch looks nowhere near that thick. You’ve got a super-slim mid-case, and a lot of that height comes from the domed crystals on the front and back of the watch.

To paraphrase the Joker, why so thick? Well, when you’re going from a quartz movement to an automatic, allowances have to be made. Mechanical movements are necessarily thicker (unless you’re in the four-to-five figure range), and an automatic just adds more to the height given the need for space for the rotor. In this case, the Nove Trident Automatic is relying on the Ronda R150 movement – something that’s been around since 2016, but that we’ve not seen many watches actually taking advantage of.

Why does this movement matter? Well, at some point, ETA is going to stop providing movements to the non-Swatch brand companies. While that’s spurred some new movements to show up, the Ronda R150 is a clever introduction – it’s actually perfectly sized to take the place of an application that might have otherwise relied on the venerable ETA 2824-2. I mean, really, check out Victor’s analysis on how this is a simple plug-and-play – and then appreciate the fact that we’ve got a brand actually using it.

On the wrist, that new-ish movement performed just as you would want – I noticed no appreciable gain or loss in time while I was testing out the Nove Trident Automatic. And again, while the 13mm thickness sounds like a classic dive watch height, it does not look – or feel – like a super thick watch. That’s clever design, as well as the fact that the eye is overwhelmed by the 46mm diameter you’re dealing with.

There are no two ways about it – the Nove Trident Automatic is a big watch. But it’s big like a paper plate, not big like a serving platter. If it fits your wrist as you like, well, you will not feel weighed down at all. And sure, like Victor mentioned in his review, this is more of a design-forward approach to a diver, but that’s ok – most of us aren’t doing more than a swim here and there, you know?

Overall diameter aside, I really, really like the looks of the Nove Trident Automatic. Our loaner came in the blue finish (on case and bracelet) with a mother-of-pearl dial. Long-time readers know blue is my favorite color, and I always like a MOP dial, so Nove stacked the deck in their favor. And, unlike Victor’s quartz model, the automatic DOES have lume on the dial – always a bonus.

Safe to say – at least in my book – the Nove Trident Automatic improves in many ways over what we see in the quartz version. The “simple” change over to the Ronda R150, and subbing in a MOP dial, makes for a watch that folks who are in to watches are going to notice. Yes, it’s visually similar to the quartz, but the improvements are definitely there. The campaign is still funding (for another week, as it closes on January 12th) though it’s not quite hit it’s goal just yet. As a bonus, if you’ve waited this long, you can actually back one of these at a price $480, which will net you an automatic diver that looks nothing like anything else you likely own. campaign page