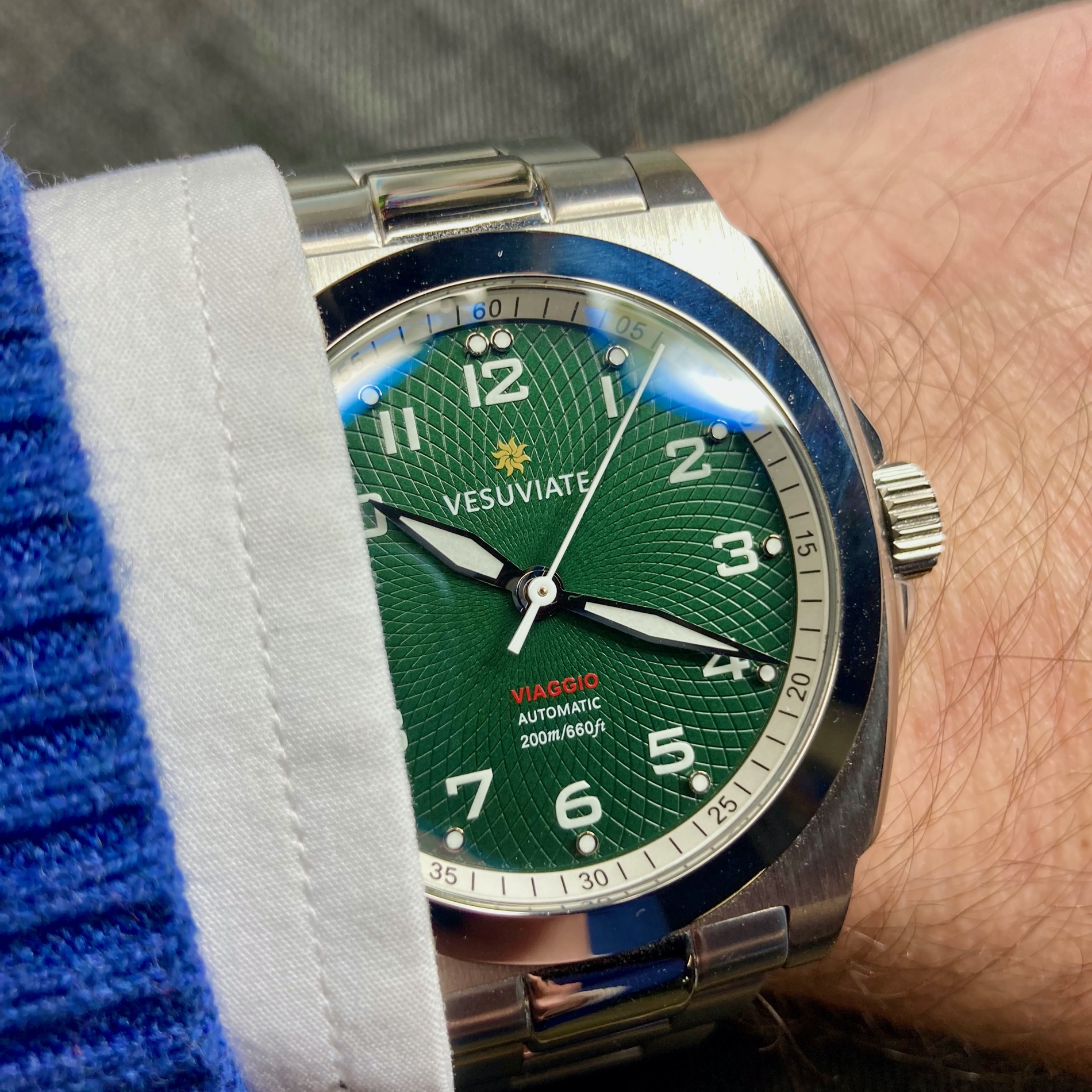 As with our review of the Vesuviate Attivo, we’re reviewing a watch today that you can’t buy – yet. Recently, we spent some time with a prototype of the Vesuviate Viaggio, and can give you our thoughts well in advance of the Kickstarter campaign kicking off.

As with the Attivo, theVesuviate Viaggio comes at us with a case shape we don’t see a good deal these days. Sure, it sort of looks like a cushion case, but it’s a bit too angular for that with those bulky shoulders. Still, it’s an interesting look. As is how the brand positions this watch. You see, they consider it a Field or Military watch. I don’t quite see that, but at the end of the day it doesn’t really matter much. If you like the look of the watch, you like it, whatever it’s called.

While the case of theVesuviate Viaggio looks bulky from the front, it’s actually relatively slim, coming in at just over 11mm thick. Pair that with the polished center links and polished bezel, and I feel very comfortable considering this a dressier piece. Then again, you could slip something else into those 20mm lugs and change the look a bit I imagine, particularly if you pick up the color of the dial.

The dial of theVesuviate Viaggio is worth noting. For a brand that’s relatively new, diving into this sort of rose engine-derived is a big swing, and not what we’d expect to see. Still, it does give some twists and turns to how the light plays, and I rather liked it. The lumed pips are applied, while the numerals (also luminous) give the appearance of being printed. Given the dial textured that’s likely not the case, but that’s one design element that felt a bit flat (no pun intended). With the applied pips, I would have liked to see the numerals applied as well, or perhaps even have the raised numerals replace those pips.

Encircling the dial of theVesuviate Viaggio (there are six color choices planned) you’ve got a white chapter ring, giving us a bit of contrast to the dial, as well as giving you that clear indication of what minute the hand is pointing at. Once you get away from the dial, the color you’re dealing with is steel. Sure, you’ve got varied finishes, but it’s steel through and through, and I am a-ok with that. Also worth noting? The case has been hardened via heat treating, so it should be a bit more robust over the years.

What I’m a little less ok with is the clasp on theVesuviate Viaggio. It looks nice enough, a fairly basic flip lock sort of arrangement. However, it was a pain to get the clasp itself to latch (aka, lock it in place before flipping the lock over). Of course, this is a prototype, and some bugs can exist, but hopefully this is something they address for the production models.

Around the back of theVesuviate Viaggio, you find a second slice of sapphire (the first being the main crystal over the dial) that gives you a view of the Miyota 9039 automatic movement, complete with a signed rotor. While we tend to view Miyota as a budget alternative to keep prices down (which, well, they do), this particular movement is considered one of their premium offerings. Still, a hacking three-hander with decent (read: not COSC) accuracy is something that will get the job done quietly, while also offering a 42 hour power reserve.

All in all, theVesuviate Viaggio gives us a unique look, as well as giving buyers an inexpensive way to pick up a small-make independent watch that is not “just another dive watch”. That case shape won’t be for everyone, but I imagine folks will like it’s uniqueness.

Pricing is one of those things that is a little in flux, with how things are going in the world with materials and freight pricing. Right now, it seems like pricing should come in at under $400, which isn’t too shabby. To be updated for when the campaign goes live (right now, it seems like it should be in late March) you can check out the Vesuviate FB page or their site; we’ll also do our best to update you here once things are live. vesuviate.com