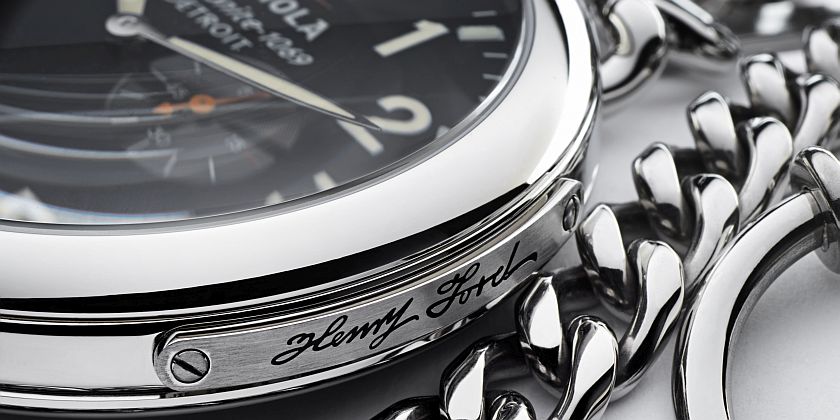 Growing up as I did in the Metro Detroit area, it was near impossible to escape the impact that Henry Ford had on Detroit. Even to this day, there is a large museum campus (The Henry Ford) and hospital system that bears his name, and Ford family owns the Detroit Lions. Oh, yeah, and those blue ovals still have a weighty presence around town as well. Given that, it is fitting that the limited edition release this year is the Shinola Henry Ford Pocket watch. In terms of the design of the watch, it is pretty recognizable as a Shinola. The crisp black dial , logo, and handset are all familiar styling carried over from other watches. As is the serial number plate mounted on the back of the case. On the dial, however, my eyes seem to think that the font used for the numerals is a bit different than we’ve seen before. We also have a new case style (obviously), with Ford’s signature on a plate on the right-hand side.

In terms of specs on the Shinola Henry Ford Pocket Watch, I do not actually have a whole lot of details. The crystal is sapphire, and I the movement inside will be one of the quartz movements they assemble in Detroit, the Argonite 1069 (same as what is used in the Runwell and Gomelsky). Past that, I can tell you that the 49mm (11.45mm thick) stainless steel watch comes with both a leather and a steel chain fob, and also has a black hickory watch box and stand.

Pricing for the Shinola Henry Ford Pocket Watch is definitely premium for what we have seen from the brand. Each of the 1,000 pieces of the pocket watch has a price of $1,000 (available here October 24, 2014), which also gains the owner membership in Shinola’s own collectors club, The Foundry. Pocket watches are a unique market of their own, so it is intriguing that Shinola went this route.

Then again, I suppose that is the style of watch Ford himself would have carried, and the black dial calls to mind his edict about the Model T – customers could have it any color they wanted, so long as it was black. All in all, this seems to be a thoroughly Detroit release.   shinola.com