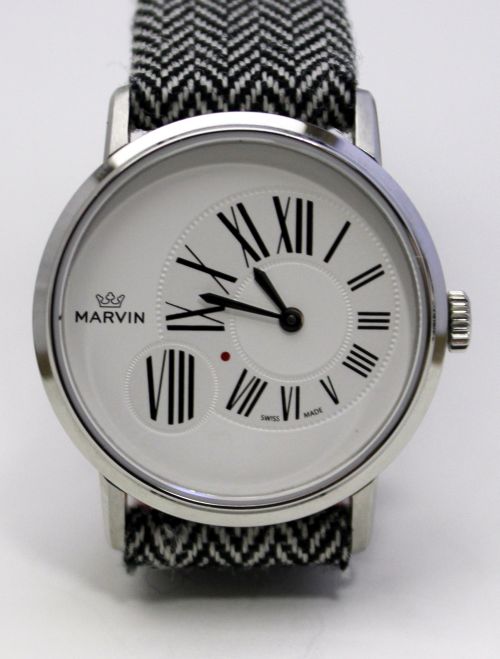 We’ve reviewed quite a few different watches from Marvin over the last couple of years, but to date, we’ve not had any of their women’s models in for review. Today, we’ll take a look at the first of two that we had sent over for review, a tweed-equipped model from their M025 lineup. If you’re familiar with Marvin (from our prior reviews LINK, perhaps?), you know that they’re not dreaming up fancy names for their watches. This particular example, which we took to calling “The Tweed”, goes by it’s catalog name of M025.12.25.96. Not inspiring, perhaps, but it will let you chase down the correct watch (they offer a few on tweed straps). Since I’ve mentioned it a few times already, let’s start with the strap. To be honest, that’s why I requested this particular model, as I knew the strap would be appealing to my wife (who helps me out with the review of watches like these). To my eye, it provides a look that’s a welcome change from the “standard” black leather strap that would normally be affixed (have no worries about strength, though, as the strap is leather-backed in a deep red). The strap is then paired to a highly polished 33mm case, which is topped with an AR-coated sapphire crystal, and offers a 50m WR rating. Tucked under that crystal is another unique look, something that is inspired by a watch from the 1940s (no, I’m not sure which one it would be). The actual timekeeping (driven by a quartz Ronda R762) is off-centered in the dial. Not only that, you’ve also go a ring of Roman numerals that grows larger as you go clock-wise from about the 3 o’clock position. So, how do they do their classic emphasis on the eight, then? First, they popped a red dot (another regular reference) at that position, and then popped the VIII out to the side in it’s own circle, almost as if it was under a magnifying glass. Sure, this leaves a good bit of “whitespace” to the dial, but that’s definitely what was intended (not some side effect of a bad design), and I think it works well – in a way, it gives this watch a touch of whimsy. Which isn’t to say I don’t think this isn’t a serious watch – it’s well-built, and given it’s styling and overall look, I think it works well for a variety of situations. But enough about what I thought – how about some thoughts from the person who actually wore it? As I suspected, this was the watch my wife initially gravitated towards from the two Marvin sent over, primarily due to the tweed strap.  To her, the strap really just had a “classic cool” sort of style to it, and that resonated for her.  While the watch was perfectly comfortable and easy to read, she wasn’t as much of a fan of the oversized 8, or the fact that Roman numerals were used instead of Arabic.  In the end, while the watch was “nice enough”, it didn’t quite click with her (though the strap by itself did). Coming in at a price of $420, this is an intriguing model from Marvin – perfect for the woman who wants a watch that’s just a bit different from the norm, but is still looking for the quality that we’ve come to expect from Marvin. Of course, should you not quite like this dial style (but enjoy the strap), they have another model (M025.13.29.96) that carries the same strap, but offers a more standard dial layout (and adds a date complication, for the price of $480).

* And yes, the denim in the background of the pictures is of course from the team over at Gustin