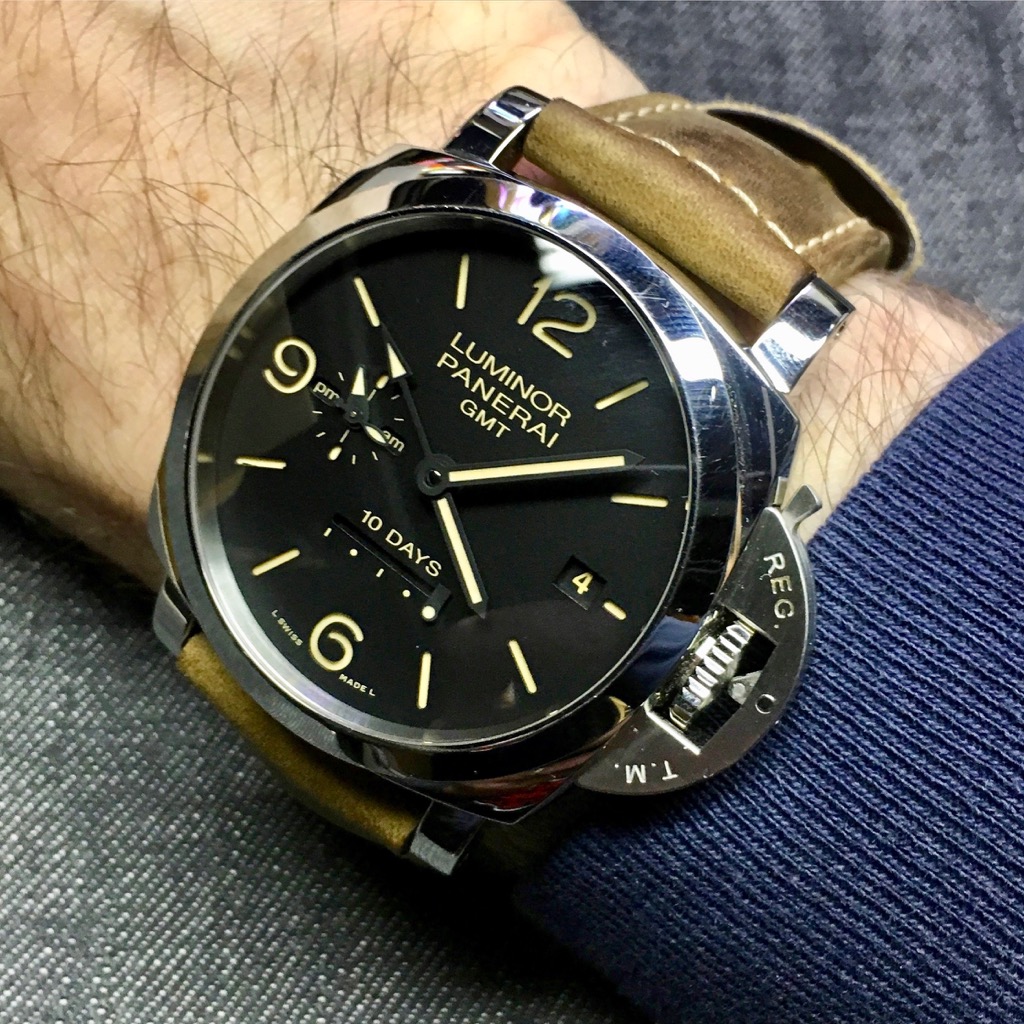 Quick show of hands – who here doesn’t know that GMT watches are sort of my “thing”?  Ok, well, for the three of you, that’s your notice – I’m into GMT watches.  Last year, I started doing a survey of some of the various GMT options out there.  At the advice and counsel of a buddy who is into higher-end stuff, he pointed me in some directions I would not normally have considered covering, and it’s lead to some fun surprises.  The latest of these was when another friend from the watch world started working over in marketing at Panerai.  That was my door, and I stuck my foot in as quickly as I could.  I took some patience, but here we are today, and I was able to spend some time with the Panerai Luminor 1950 10 Days GMT.

In some ways, this review was also a way for me to be just a bit more like John, who likes his classic big brands, but prefers to go in slightly different directions with his picks (as we see with his own personal Panerai).  That said, I was also being true to my own watch sensibilities.  You see, the very first mechanical watch I ever had was a Panerai homage.  That watch is long gone, but that one was where I really latched on to the loveliness of a sandwich dial, and that vintage look has stuck with me as a favorite ever since.

Of course, that lowly homage couldn’t hold a candle to what I experienced with the Panerai Luminor 1950 10 Days GMT.  While I certainly don’t have it to do a side-by-side, there’s a reassuring heft that the real deal carries with it.  Some of this is it’s real weight.  But there’s more than a little that comes with the overall feel of a quality, sturdy build.  For example, the movement winds as smoothly as silk, and the crown protector flips out cleanly, the whole assembly sturdily affixed in place.  These are just a few impressions that hit quickly, and resonate as to how different this watch is from other look-a-likes you may have encountered in your own watch journey.

In general, I’d say that Panerai is more well known for their simpler time-only watches, either in a regular or California dial.  You know, the watches you call to mind when you think of Panerai.  But as I said, I’m channelling my inner John here, and we went in something that is off that “iconic” beaten path. Sure, the profile of the 44mm case is certainly identifiable, as is the tasty, tasty sandwich dial.  Once you get past that, though, the Panerai Luminor 1950 10 Days GMT brings a whole lot more to this Italian dinner.

Not that it’s a surprise, all of it is hiding in plain sight in the name of the watch.  10 days?  That would refer to the power reserve that the movement offers.  Sure, ten days may be overkill for most folks, but to me it says “yeah, we can do it, we’ve got the room in the case, so we did it.  Take it or leave it.”  And, yes please, I’ll take it.  Not sure which side of the watch winder argument (do you need one?  or not?) to favor?  Well, a 10-day power reserve will certainly keep you from needing to worry about it.  The current level is indicated by a linear slider above the 6 o’clock position, and even brings some lume to the party.  For my time with the watch, I never saw the reserve drop below 9. Then again, I barely let the watch leave my wrist.

Next up for the Panerai Luminor 1950 10 Days GMT is the reason I initially asked for this watch on loan – the GMT.  Here, it’s a bit more complicated than I normally encounter on my watches.  I mean, yes, you do have the secondary (arrow-tipped) hand that marks out the 24-hour time (and yes, I did have it set to GMT, thank you very much).  In a flip of how most folks would expect, the GMT hour hand is the one tied to the minute hand adjustment, and then the main hour hand can be advanced (forward or backwards) in one-hour clicks.  Again, this is the reverse of how most folks might expect, but I’ve come to understand (and appreciate) that this actually makes more sense for a traveller.  You keep the GMT time set to your home time zone, and then when you land in your new time zone, you do a quick 10-second adjustment to the main hour hand, and you’re on local time.

Frankly, it just makes sense.  Which, when the movement in a watch (more on that in a second) is as complicated as we have here, well, that simplicity in operation is as welcome as it is a contrast to the movement’s complexity.  That movement carries the label of calibre P.2003 (more on that here).  Just that designation alone made Victor (once he realized what watch I was talking about) use some terminology that, well, made his thoughts (to the positive) known.  I just know it’s an in-house movement for the brand, and enables all we see on this watch, including the sub-seconds and AM/PM indication over at 9 o’clock.

I also know that the movement is what makes the Panerai Luminor 1950 10 Days GMT appeal to me.  It adds elements to the watch that I simply like, as well as displaying some real technical chops.  And it does it in a way that isn’t screaming it out at you.  It’s there, quietly doing it’s job, waiting for your to realize how superb it really is.  Or, you know, for your watch buddies to be struck just about speechless (as happened to one of my friends).

I do realize how funny it is to combine “Panerai” and “quietly”, as it’s larger-than-life sizing seems to be all about attention.  And sure, the 44mm case of the Panerai Luminor 1950 10 Days GMT is larger than I might personally prefer (fingers crossed we’ll get to see that new 38mm case soon), I still found it eminently wearable.  I’d say my own wrists are on the edge of where this watch would be overbearing, but fortunately for me, it was on the correct edge.  Some of that is due to the curved lugs (I did have some overhang), and some of that is due to the strap that the watch comes on.

Stock straps are something that we generally don’t give much attention to, I know.  But in the case of the Panerai Luminor 1950 10 Days GMT, it’s worth calling out by itself.  This is more than just a little in part due to how many aftermarket “Panerai” straps there are out there, and I’m sure many of you have played with some of those.  Sometimes, it seems just throwing a Pre-V buckle on there is about all some makers do.  Others build out something that’s more supple, and give the strap a luxurious look and feel.  Then, there’s this one that I experienced, and it put all those others to shame.

On the Panerai Luminor 1950 10 Days GMT, the leather was extremely soft and supple, yet it felt plenty sturdy for taking the weight of the watch.  Surprisingly (again, this is my first time with a Panerai) it was also a padded strap.  It’s a subtle gradation to the edges, but the padding in there, and helps build a profile as well as making the strap more comfortable.  This comfort is also assisted by the fact that the strap tapers to 22mm at the buckle, which helps reduce bulk under the wrist.  While I would not have minded a plain-old thumbnail buckle, I get that the Pre-V is a signature of the brand, and the slightly smaller size here, well, I’ll let it slide.

As I mentioned, once I got the loaner of the Panerai Luminor 1950 10 Days GMT in, I rarely let it off my wrist.  That meant it went to the office, got paired up with a suit on a different day (pro tip:  make sure your French Cuffs have enough room to fit this case profile), and even headed out to the movies with the family (Paddington 2, for those curious, and it was quite enjoyable).  The overall size of the watch lends to a more casual feel, but the fully-polished case lets it sneak into that dressier scenarios as well.

Which, when you have a watch that commands a price tag of $13,400 – as the Panerai Luminor 1950 10 Days GMT does – you want something that is going to be versatile across a variety of situations.  Add in the fact that this is the sort of watch that is intended for continent-, if not globe-, trotting, and you all but need the versatility.  Yeah, there are other watches that can do this, but they likely won’t have the technical chops that the Panerai Luminor 1950 10 Days GMT has.  Nor will it have that immediately-identifiable Panerai design DNA.  Which, in my book, is a good thing to see in the steel, and I’m certainly glad we got to spend some time with it.

I’m sure John and I can’t be the only Panerai admirers amongst the WWR family of readers.  Sound off below (or over in our Slack channel) if there are any other Panerai models you’d like us to review.  I cannot say for sure that anything and everything is possible, but we’ll certainly do our best to have a look at what you want to see.  Or who knows, perhaps you don’t like these diversions into aspirational (read: save up for a while to get) sorts of watches – and if that’s the case, let us know as well.  Unless you tell me otherwise, imma just assume you all are just as entranced by the Panerai Luminor 1950 10 Days GMT as I was.  panerai.com