“No disintegrations.” Boba Fett gets his own tourbillon 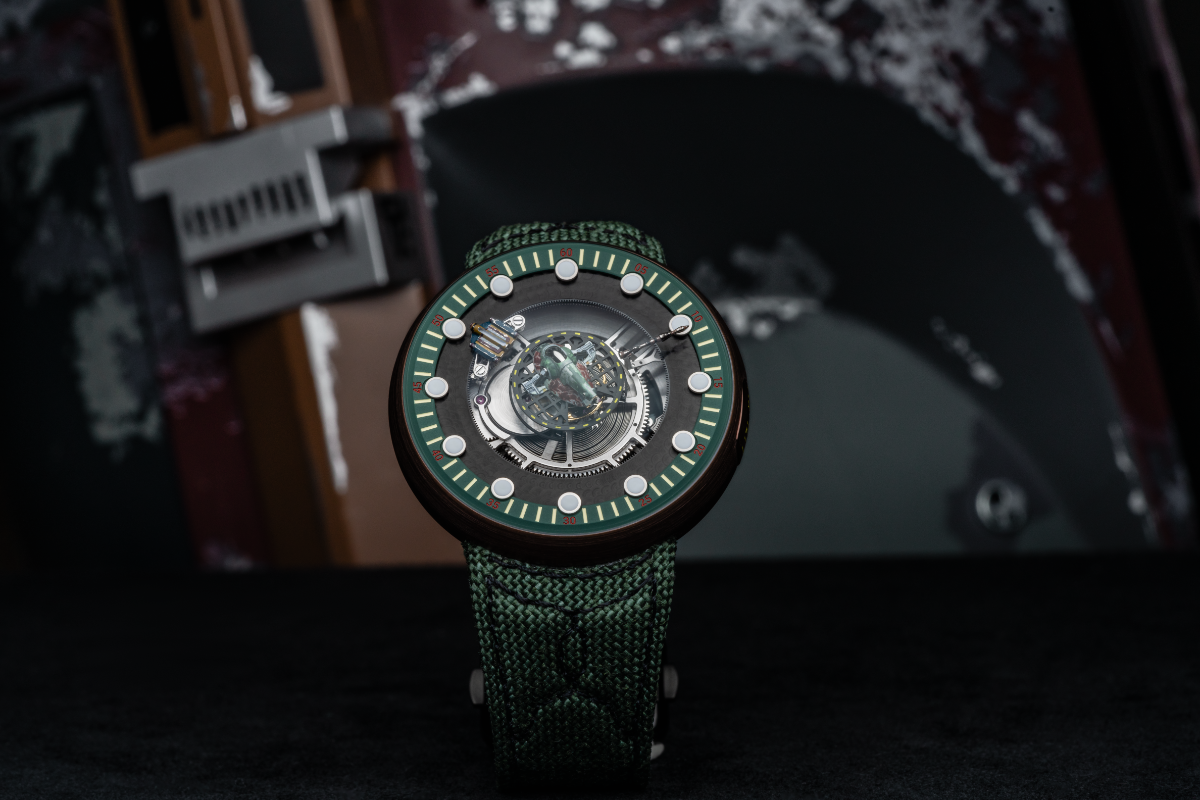 The watch, created by Kross Studio’s latest in collaboration with Lucasfilm features Boba’s ship on a case that looks like it’s something the mysterious helmeted one would definitely wear while bringing in rebel scum.

Time telling on this thing is a bit interesting, as well. The hour hand is Boba’s backpack and the minute hand is a rocket. From the studio:

For Kross Studio, a journey through time and space required a more creative reading of the hours and minutes, employing a unique peripheral format and planetary gear system that orbits 360 degrees around the tourbillon. A 12-factor gear ratio allows the planetary minutes system to empower the progression of the hours. In order to optimize the movement’s efficiency to the maximum, the hour and minute display system is fixed on two very wide, high-precision ball bearings. Once again, Kross Studio looks to Boba Fett’s iconic gear and attributes for design inspiration, rending the hour hand as Boba Fett’s jetpack and the minute hand as its rocket.

No visible crown impedes the case’s perfect symmetry thanks to Kross Studio’s ingenious D-ring crown system, placed instead on the case back. The barrel’s mainspring is wound by lifting the D-ring on the case back, which is turned like a key, offering a more intuitive and more efficient user experience than a traditional crown. The timepiece offers a maximum power reserve of five days. Time-setting is just as simple, completed by pressing the “Time Set” push button at 3 o’clock while simultaneously turning the case back D-ring in either direction.

It comes inside a copy of Boba’s ship which doubles as a watch case.

Each EFX Boba Fett’s starship watch display is the same scale as the actual filming model as seen in Star Wars: The Empire Strikes Back™. They are made with an aluminum and acrylic substructure with the detail parts cast in resin. Each detail piece is individually cast from a master made from the same model kit parts used to make the screen used prop and then carefully finished and painted by hand. The parts of the EFX Boba Fett’s starship-inspired watch display were developed with a thorough review of the screen used prop.

No pricing yet but if you probably have be as rich as Pyke to get one of these.

Kross Studio’s Boba Fett watch is quite a bounty