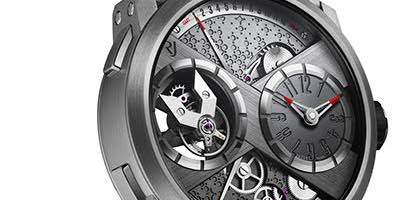 Romain-Jerome, everyone’s favorite wacky watch brand, has released the Moon Orbiter GMT, an oddly staid and nice-looking GMT piece with a lot less whimsy and a lot more cool than their previous models. The Moon Orbiter is the second in their lunar series and they created it in conjunction with La Joux-Perret.

The watch has a flying tourbillon inside a 48mm case and has a jump hour retrograde GMT and day-night disk. The best thing? All the moon dust!

?The complication is regulated by means of a dedicated pusher at 2 o’clock on the case, acting as the timepiece’s claws as the continuity of RJ-Romain Jerome famous X symbol.
Set atop a ceramic ball bearing, this distinctive X shape is also to be found on the rear side of the case, on the oscillating weight, balanced by inertia-blocks made from Moon SilverRJ, an alloy made of low oxidation silver and genuine moon dust.

They are only making 25 of these things and they’re going to be pretty expensive so if you’re if you’re planning on punching out Buzz Aldrin for faking the moon landings you’d better wear a Timex until you get back to your lonely, weird-smelling hotel room.