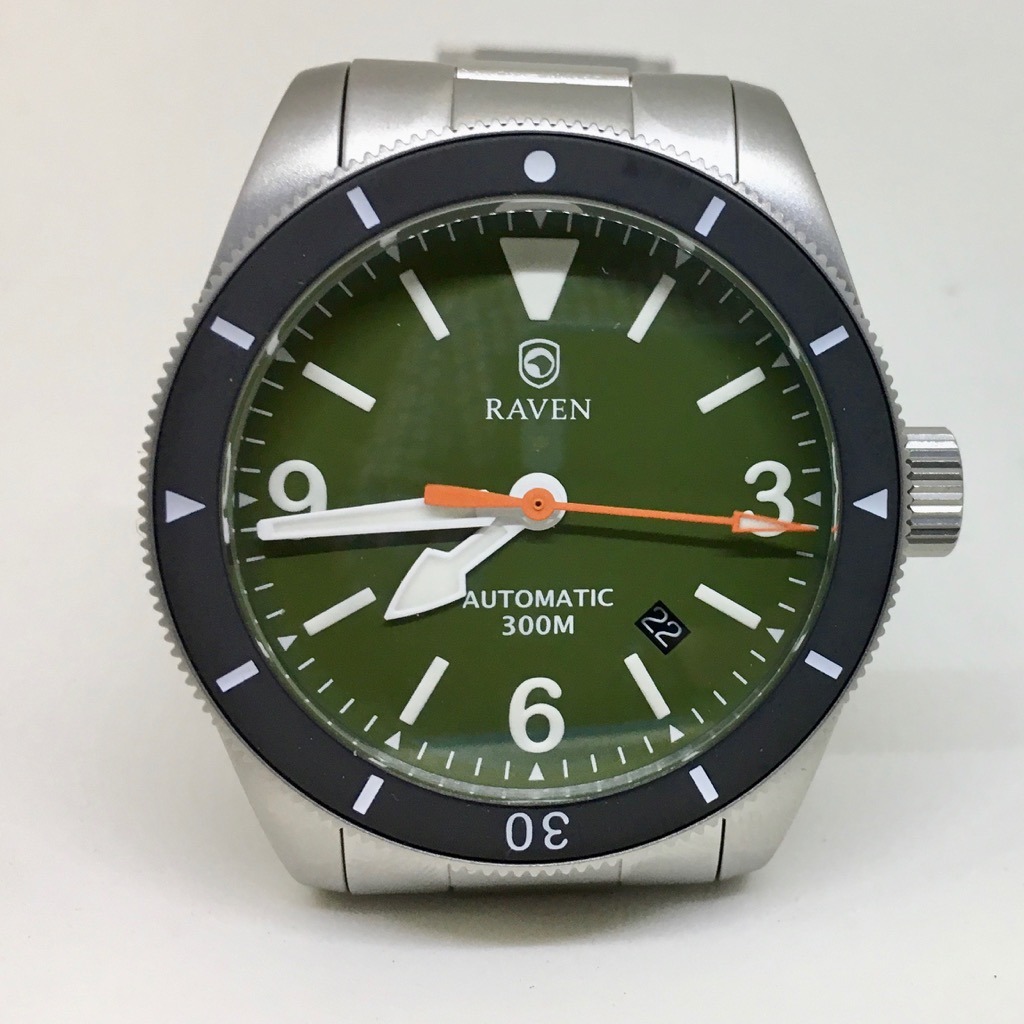 When it comes to the watches that Steve Laughlin has been producing under the Raven and Benarus brands, I think we here at WWR have reviewed just about every model that has been released.  You might think that over the years it might get a bit tiring, but to the contrary, Laughlin has kept things fresh.  The latest release (which is fairly close to sold out at this point) is his Raven Venture.

What I’ve liked about the watches from Laughlin is that they’re generally identifiable (some straight-up homages, but by and large that’s not the case) with cues sneaking from other famous watches of the past.  As you have probably sussed out, the Raven Venture has a dose of the Tudor Ranger to it, but it’s not in a way that’s contrived or forced.  For me, it shines through in the handset.

In fact, it’s the hands on the Raven Venture that are one of my favorite things, actually.  It sounds like a minor thing, but it seems that we only have a few variations on a theme.  And I get it, you can’t get things to o crazy or you impact legibility and actually being able to tell the time.  Then, you get something like we have here, and it’s a different shape than the norm, but it’s still something that’s quite functional and usable.

And really, that’s the tagline for the Raven Venture – functional and usable.  Yeah, it’s a good looking watch (and if you don’t like green dials, there are also grey, black, and orange ones).  To start with, you’ve got that steel case.  While there’s a brushed finish, we looked at the sandblasted one, and I think I rather like that.  It softens the steel a bit – visually – and of course repels any fingerprints you might want to try to put on it.  The bracelet has the same finish, as does the clasp.  The clasp, with the built in ratcheting extension, another small delight.  I may not dive, but I sometimes want a little extra wiggle room during the day, and popping things out one click gives me that.

You can think of the sandblasting on the Raven Venture as giving it a matte finish (because it does), and that carries forward onto the matte ceramic insert (which is lumed to nice effect).  Not only does this fit with the look of the watch, it fits the theme of usability.  You’re not blinded by extra glare off of the dial (which you can sometime have with sapphire inserts), and you can easily see where you’ve set the bezel to.  Oh, and speaking of – I detected no play at all in the bezel, and it’s a satisfyingly solid click action as you rotate it around.

Of course, the Raven Venture is not all dull surfaces.  The sapphire crystal has it’s gleam, and comes with a double-domed shape and AR coating on the underside to keep the glare down.  This, of course, then gives you an unobstructed view of the dial.  I would not go so far as to call the dial sparse, but it is certainly clean.  You’ve got a classic 3-6-9 layout with a modified triangle at 12; minute markers, the logo, and a small bit of text on the lower half.  Mix in the date wheel, and that’s it.  It’s an instantly legible look, and allows the compass-point indices to be larger than you might expect.  It’s a look I dig, and I particularly like how the orange seconds hand sets off against the green of the dial.

Now, you might notice that some of the text proclaims a 300m WR rating for the Raven Venture, and that’s fitting with the lineage of what Laughlin has been producing.  While the Venture may not look like a stereotypical dive watch, that’s what I think of when it comes to his brands.  In fact, some of the shots here are side-by-side with my gen 1 Benarus Sea Snake (for another reason which we’ll get to in a bit) as a way of underscoring it.  While the Raven Venture has more of a field watch feel to it, it’s certainly not afraid to get wet.

So, why set the Raven Venture next to the Benarus Sea Snake?  Aside from having the same creator, it was a way of showing how Laughlin has changed his designs over the years (I believe 5-6 years separate these) all while still being powered by the same movement – the venerable ETA 2824.  Comparing the watches, they have different looks, of course, but you can see how the Raven Venture has become a bit slimmer while retaining the WR, and the bracelet and clasp have certainly improved as well.  It’s something I’ve mentioned before, but we (or at least I) enjoy seeing how a designer and brand grow over time, and being able to have these two examples side by side really underscores that.

So, if you couldn’t tell, I am definitely a fan of the Raven Venture.  Which meant, when it came time to size and wear the watch, I was an eager beaver.  On the sizing, it is worth noting that there are no half links on the bracelet (though the links themselves are closer to half size anyways).  On the first sizing, I got it to the correct fit that I prefer, but I found myself needing to use the ratchet clasp at some point during the day for some more room.  So, I added a link back in (simple to do, as the watch has screwed, solid links), and then used the pin on the far end of the clasp to move stuff in a bit.  In other words, sort of what you’d do with a half link.  This got a looser fit, but not so much that it was hanging out below my shirt cuff.

I illustrate that for a reason.  Basically, when it comes to the Raven Venture, or any other watch, you may need to experiment to get your correct fit.  What works for one person may not work for another.  What’s nice is, that with the ratcheting extension, you can test out the various sizings over the day, and if it’s too tight, you get yourself a little more breathing room.

For me, the Raven Venture settled in, and I just enjoyed having the watch on the wrist.  With the overall matte finishes, it’s a quiet sort of companion for the day, and I found it worked well for just about anything.  I think where the watch would excel would be in the outdoors. You know, actually venturing out.  So, with the warm weather just around the corner, strap on those hiking boots and a backpack, and get yourself a sturdy, well-designed watch. You know, like the Venture.  Which, at a price of $650 feels like an absolute steal.  ravenwatches.com

If you’d like to know a little more about Laughlin’s design process, you’ll want to check out this podcast episode from Two Broke Watch Snobs.