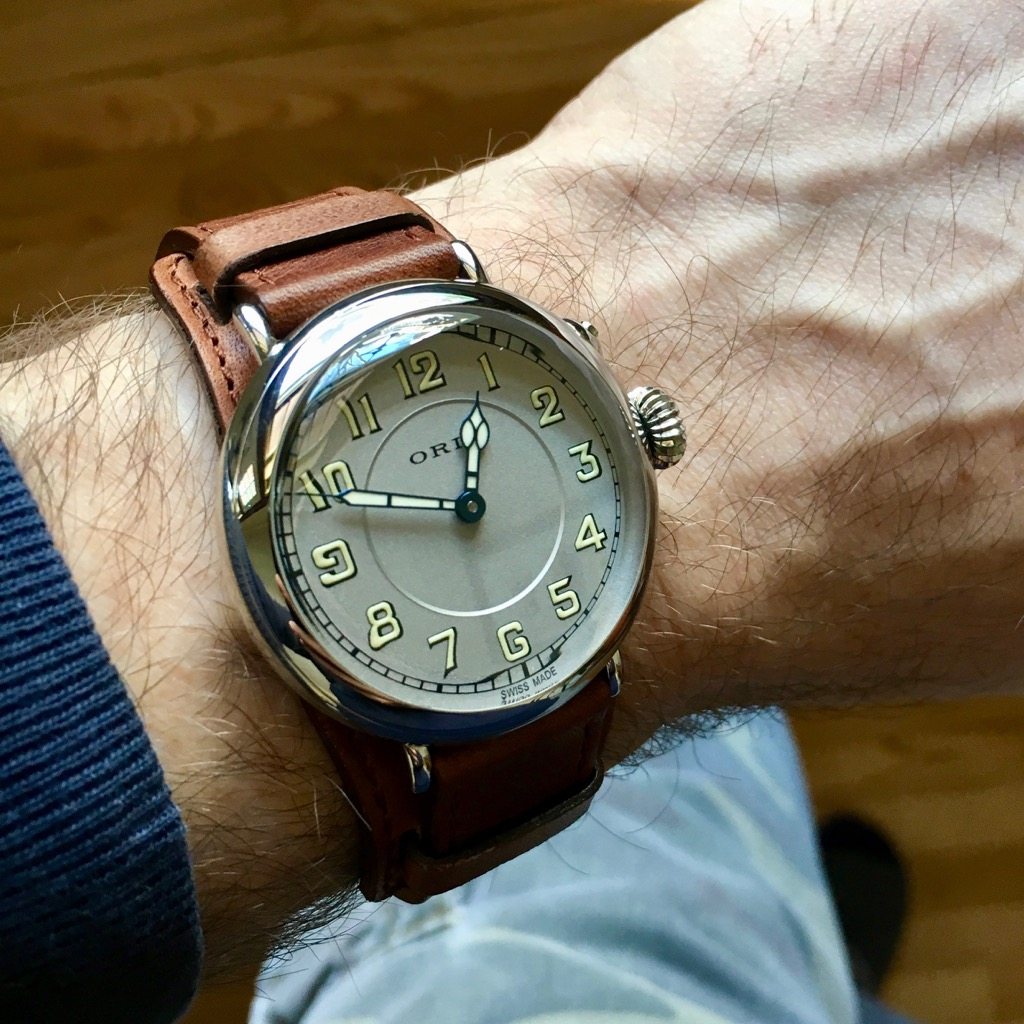 We’re on a bit of an Oris kick here at WWR, given some of the new releases, as well as the reviews that we’ve had here lately.  While I may have been late to the party in seeing their products in person, I’ve quickly become a fan of many things that they’ve done.  While I’ve sampled the Big Crown lineup before, the Oris Big Crown 1917 takes things in a much different direction.

I’ll say it right out of the gate – the Oris Big Crown 1917 scratches that vintage/heritage itch for me.  Sure, a purist may actually go looking for an original example, and I say all the more power to them.  However, unless it’s something particularly sentimental to me (say, looking for a birth year watch or something), then I am perfectly happy to accept a modern interpretation, along with a modern movement (and all that that brings along to the table).

Now, on paper, the Oris Big Crown 1917 wouldn’t seem all that interesting.  You’ve got a simple, rounded 40mm case (in steel), domed sapphire crystal, a simple silver dial with old-style (and shadowed) numerals, and a cathedral handset.  But that’s why spec sheets – while helpful – don’t tell the whole picture.  For me, you need to take things all together.

Sure, the Oris Big Crown 1917 espouses a design language that we can see in many brands (in fact, on my Instagram feed, some folks were commenting on those similarities).  Frankly, that can be said about a lot of watches, particularly those with vintage and/or military inspiration.  At that point, it really behooves the prospective buyer to go and survey the landscape, and find the example that fits what they’re looking for, both in terms of styling specifics, hard specs, and of course, price.

What struck me first with the Oris Big Crown 1917 is the dial.  At first glance, it’s just a flat silver, but closer examination shows that to not be quite right.  There’s a step to the inside, right where the hour hand hits, which is reminiscent of the inner ring on Flinger-style watches.  Then (and this shows in some of the photos), you can see that the dial isn’t just a flat paint, there is actually some variation to the finish.

Next on the dial (and what really seals it for me) are those numerals.  Oris hit the right shade of vintage lume in my opinion, and got the font of things just right.  What pushes the numerals of the Oris Big Crown 1917 over the edge for me is, of all things, the shadows they have.  This carries the feeling of hand-done sign painting (like what used to be done on office doors), and it’s not something I’ve seen much of.  Sure, you can get actual shadows from raised and applied indices, but this is something else, and it feels appropriate to the era this watch is calling home.

As I mentioned, this is not our first foray into a Big Crown model from Oris (the first one can be seen here).  I also mentioned that it does things quite differently, as my talk of the vintage cues should have demonstrated.  There’s another fairly significant difference here as well – that big crown does not pull out on the Oris Big Crown 1917.  Yes, you can wind the movement, and set the time, but the crown itself is fixed in place.

So, how do you set the time on the Oris Big Crown 1917?  Simple – you press on that button up at 2 o’clock, and now you’re in time-setting mode.  In my minds eye, I see this simply moving things in a similar manner to how pulling out the crown would do on another watch.  Is this appropriate to the era?  I have no idea, but I can see it being a solution that would help to keep things sealed (well, as much as you need for a 50m WR rating) while keeping the sometimes fragile winding stem from being subjected to abuse.  Here, it makes for even more of a novelty, and if you’re wearing the watch regularly, something you’d be interacting with infrequently.

The Oris Big Crown 1917 comes fitted on a leather strap tucked into it’s 18mm lugs, along with the second piece that runs under the case, making this a bund strap (again, another aviation sort of reminder).  What this meant for me is that the watch wears smaller than the dimensions suggest.  This is counter-intuitive, so let me explain.  Yes, you’ve got that bigger piece of leather, but it’s not particularly thick.  And since it’s wider than the watch case, it makes the case look smaller than it is.  Add in the rounded sides and smaller lug width, and you have a watch that wears smaller than you might think.

Speaking of wearing it – wear it, I did.  With the lighter brown bund strap, the Oris Big Crown 1917 fits very firmly into the casual realm (pulling off the leather backer, though, then you’re back into the territory of being able to dress the watch up).  I wore this watch around the house, as well as to the office, and it just plain worked.  The brown strap sort of dictates what it “goes” with, but the silver dial makes it a bit of a chameleon.  The leather strap was instantly comfortable (due to it’s thinness), and the curved case plus double-domed sapphire meant the watch slipped in and out from under a cuff without a second thought.

I thought I would miss having a date window on the Oris Big Crown 1917, but I really didn’t.  Aside from the complexities it would introduce with the pusher setting mechanism, I guess I don’t check the date as frequently as I thought I do.  I did miss not having the seconds hand (I like the visual reassurance that things are running), but that is not something I would call a deal-breaker.

So, at the end of the day, yeah, I did really enjoy the Oris Big Crown 1917, and liked having it on my wrist for the time it was on loan to us.  Now, not everyone is going to be a fan of the $2,600 price tag that the watch commands, but that’s partly due to coming from Switzerland, and partly due to the limited-edition nature of the watch (only 1917 pieces are being made).  If I were selecting a watch from the Oris catalog, I might instead opt for the GMT I reviewed at a similar price point, but that is not to say this is a bad watch.  The Oris Big Crown 1917 is actually quite superb in it’s own right – it just has a lot of great competition from within the brand when it comes to commanding your attention.  oris.ch