Hands-on with the Silver Archetype One 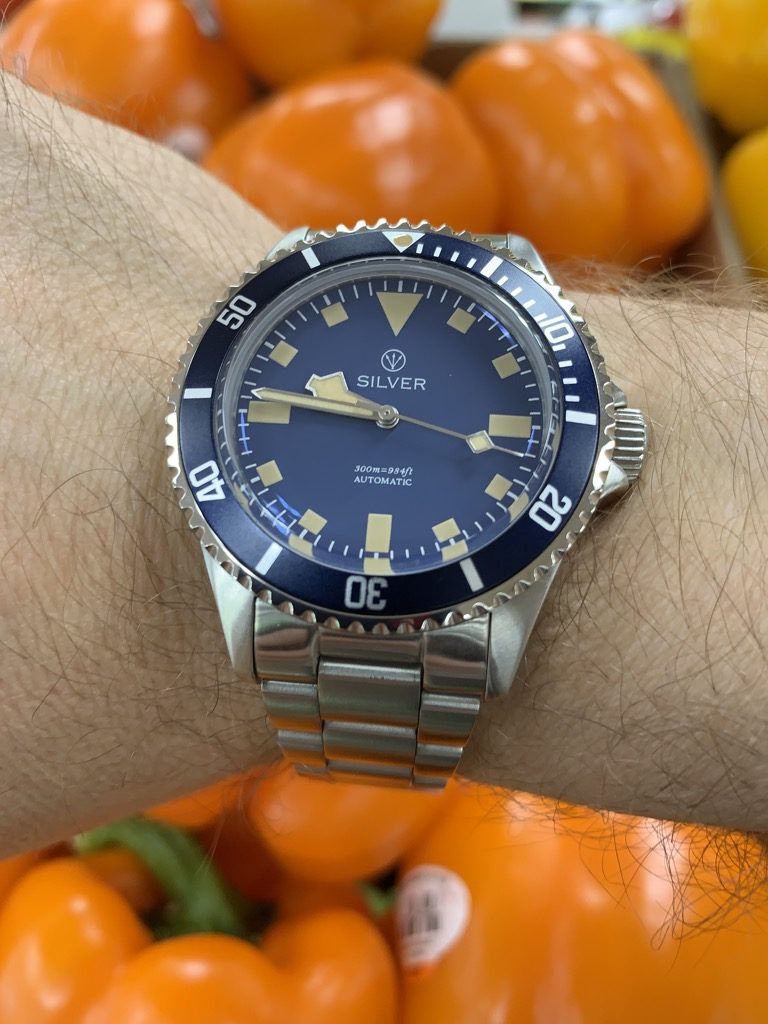 Silver’s Archetype dive watch is a great watch, but falls short if you have higher homage expectations for it. Should you buy one?

The last time I wrote about Silver, I was disappointed that they were bad at communication and backed out when they had agreed to let us review the watch. Since that time, they shipped the watch to their backers. We are able to bring this review to you through one of their customers.

The example I have here arrived running at -0.3 seconds a day, which is really very accurate. (I checked this using the Accuracy2 measurement tool from ONEOF.

The watch is 39.5mm in diameter, and 47mm lug to lug. Those dimensions lead to a comfortable, classic-sized watch. I wore it for two weeks, and I’m pretty sensitive to how heavy a watch is, and how comfortable it is. Simply, Silver is very comfortable.

In terms of height, the watch is 12.5mm from back to the top of the lightly domed crystal. The crystal is AR coated on the inside of it, which makes viewing the dial super-clear.

On the wrist, contributing to the comfort of the wear is the bracelet. The bracelet tapers from 20mm at the lugs to 16mm at fold-over clasp. The links are brushed on the top surface and polished on the sides.

The end-links on the bracelet are solid, and female, similar to those used by modern Tudor, or ORIS. The end links aren’t machined, and like all molded ones, look a little soft. That’s not wrong for a vintage watch homage.

The lume is colored to look like aged vintage radium, and glows a bright green. It lasts for hours in the dark after wearing for a while outdoors.

All of these things make the Silver Archetype One a great watch. It’s a solid price, an excellent performing movement, made from 316L stainless steel, stainless bracelet, and AR coated sapphire crystal.

It comes in a nice, small-ish travel case with a handle. It holds two watches, has a zippered mesh pocket in the lid, and has a nice handle on the back hinge. Honestly, I’d like to have a few of these cases around for other watches, too.

First, I want to lay out how Silver set my expectations:

The blue, snowflake version of the famous military dive watches was more widely issued as it did not have be to custom made from the original manufacturer. This is our painstakingly detailed and exacting homage – unlike anything else available.As such, all components are custom made (excepting the movement). – The Blue Snowflake product page

The emphasis on “painstakingly detailed and exacting homage” set me up to expect it would be very close to the original watch it’s paying tribute to. If that had been the only mention, I could have moved on. But they continued to set my expectations high.

My dad’s dad (Grandpa Silver) had a Rolex 5513 Military. He cherished it so much it became a “safe queen” which was eventually sold after his passing. My dad tried to track it down but gave up as prices soared for these rare pieces. I inherited my dad’s love of the 5513 but could never find an homage to my liking. My father and I tried almost all the affordable homages available throughout the years but there was always something not quite right (too big, too long, wrong hands, wrong font, phantom date wheel, etc.).

“As close to the real thing as possible…”

These words became our mission…so, we made our ARCHETYPE ONE series to be an exacting tribute to the great and elusive Rolex 5513/5517 Military and the lesser known Tudor milsub but with the highest grade modern materials.

We sweated over the shape and curves of the case. We rendered and rendered until we could see the resemblances we were pining for. Then we poured over every millimeter of the engineering schematics until we finally had prototypes we wanted – a 5513/5517 military tribute watch like none else out there.

So, Silver’s words: they wanted to make a painstaking, exacting, homage as close to the real thing as possible, sweating over every millimeter.

Did they live up to it?

First, there are few easily accessible pristine examples of the Rolex 5513. The watch was made from 1962 until 1989. By this time, many examples have had wear, servicing, and polishing of case edges. The 5517 was made for one year, 1977, and is largely a 5513 with sword hands and a 60 minute bezel insert, manufactured for the British Army.

With that said, there are enough good examples of the 5513 that it isn’t hard to compare Silver Archetype One with a 5513 and see if every shape matches up or not. We compared it with two examples of the Rolex 5513 Submariner.

The crown guards are almost a good match. This is a detail many attempts get wrong, and here, they have just a little too much slope to their top surface and feel a little short. They’re still better than many other watches.

The profile of the case is a miss. The side shape of the case doesn’t match the 5513 very well at all. 5513 is thinner in the middle, where Archetype One is straight across.

The caseback edge on a 5513 extends nearly all the way to the edge of the case. Comparatively, the caseback of Archetype One stops short about twice the distance that the Rolex does.

The bezel shape is okay. The case edge has no bevels where the sides meet the top of the case.

The bracelet is a solid link, where the original had either hollow center links or folded links, depending on which year 5513 we’re talking about. By the 1980s, they came on the 93150 bracelet which shipped on 14060 and 14060M into the 2000s. Yes, this is being a little particular – but they did say they wanted as close to the real thing as possible.

Which is interesting, because the original 5513 Submariner used an acrylic bezel and a friction based bi-directional dive bezel. Sapphire is a sensible upgrade, and one Rolex made with the 14060 Submariner. Sapphire gives greater depth ratings and better water resistance, increasing the Sub from 200M to 300M depths.

Some people think a dive bezel must be unidirectional with a click spring. These people are wrong. The Sub-with-a-date got the click spring unidirectional bezel in 1978 with the 1680 Submariner. The no-date Sub remained friction spring and bi-directional until 1989. That didn’t make it any less of a dive watch.

This is fine, but it isn’t “as close to the real thing as possible” when UNDONE’s BASECAMP ships with the bi-directional friction one. It’s a concession, perhaps to customers who won’t know the history, but concessions aren’t no-compromises-as-close-to-the-original, either. I understand these choices, but I think it’s important we know where Silver diverged intentionally from the original they’re paying tribute to.

The dial fonts are a mixed bag: the SILVER font is excellent, and nails the shape of the S and R as you might find in “SUBMARINER” in some other watch. The depth font is completely italicized, where on the watch it pays tribute to, only M and FT are italicized.

So why do I keep mentioning Tudor 7016? The watch we borrowed to bring you this review is the blue snowflake variant of Archetype. Rolex 5513 was produced from 1962 until 1989. The comparable Tudor model from the same time period, using similar case construction and details, was the 1964 Tudor 7928. But that model has a very 5512 Gilt Submariner-like dial. To get the model that matches up with snowflake hands and hour markers, we have to look to Tudor 7016.

None of this makes Silver Archetype One a bad watch. It’s an excellent watch. It’s up to you whether or not it reaches the level of being an accurate 5513 homage. It absolutely pays tribute to the Tudor 7016 in this form (blue snowflake dial, blue bezel insert, snowflake hands), and I enjoy the lighter blue dial against the dark blue bezel. It’s very comfortable to wear.

The Silver Archetype One is Silver’s first watch. They have additional models planned. It’s clear that this was not a catalogue exercise, where they could have used cases and parts picked out of offerings already made. For that reason, I’m a little saddened that they didn’t get closer to their self-declared goal. Had they just made a good watch and not said exacting detail was the goal, I wouldn’t have been let down. As it is, it’s an excellent watch with a great movement, and arrived keeping wonderful time. It’s just affordable fun. The Silver Archetype One is available from SilverWatchCo.com for $399 USD.