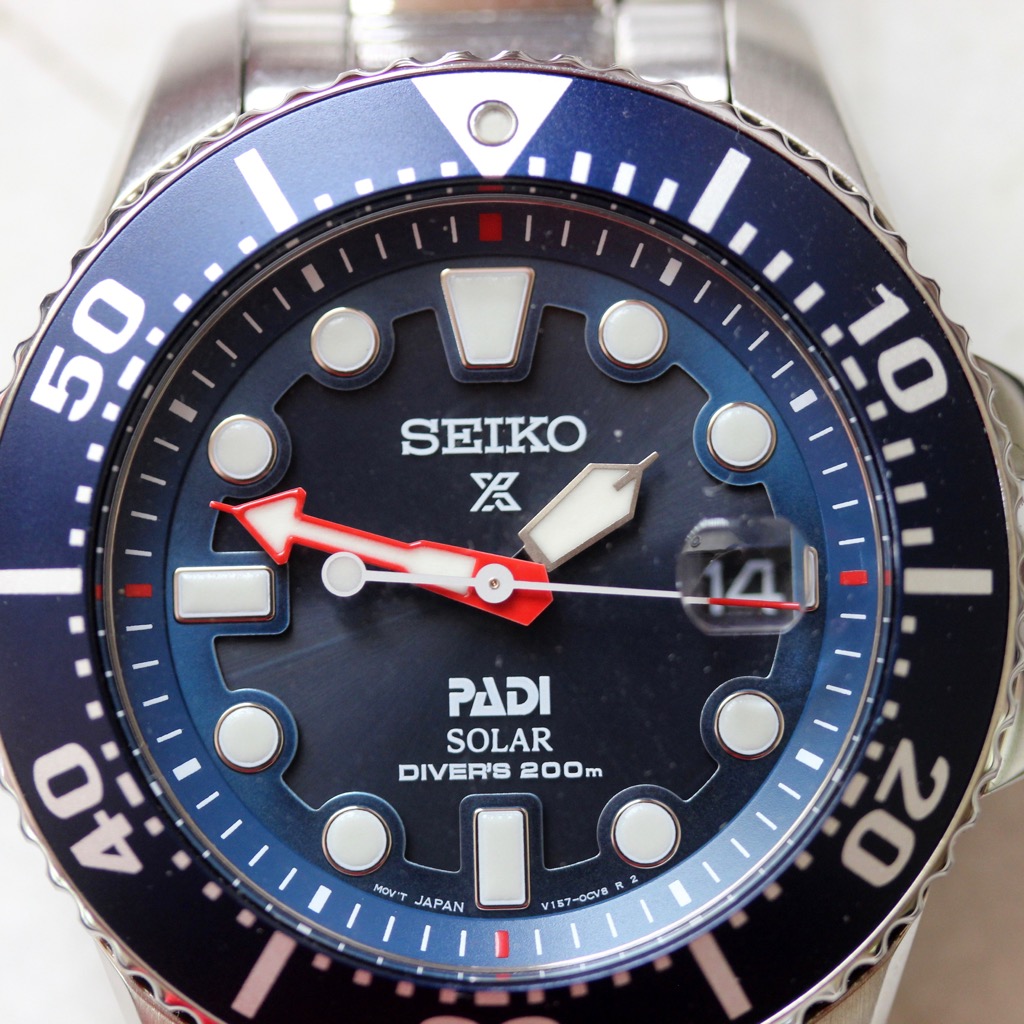 In yesterday’s Seiko review, I stated that the SRPA83 felt severely out of place on my wrist, what with my diving being limited to desks and the local pool on occasion.  Well, I think I’d put today’s watch, the Seiko Prospex SNE435, on the other end of that spectrum.  Sure, it hits the ISO standard for SCUBA diving, but this feels like one that won’t complain about some desk diving.

In many ways, the Seiko Prospex SNE435 is a very recognizable watch.  The hands are identifiably Seiko, and other parts of the watch feel vaguely Sub-ish, and somewhat like a Citizen (mostly with those indices).  In other words, this is a watch that is identifiable as a diver (to those that know the style), and will otherwise look like a “nice watch” to those not immersed as we are in the world of watches.

Should you want to immerse yourself in the waters, the Seiko Prospex SNE435 has the specs for diving, as would befit one that is a PADI special edition.  The 43.5mm case uses it’s size to get some legibility (decently sized clicky bezel, bigger indices) and to show off the bright red minute hand, and carries a 200m WR rating.  So, yeah, it’s a robust watch.

The Seiko Prospex SNE435 is also a dressier piece.  Both the case and the bracelet (with the infernal collar + pin arrangement holding things together) have alternating brushed and polished finishes, so you get a bit of flash.  You also have a cyclops magnifier over the (color-matched) date wheel, which is the non-complication feature I have come to like the most over the past few years.

So, you’re thinking, yeah, yeah, it’s another vaguely-dressy Seiko diver, where’s the hook?  Well, that comes in the movement.  While you might expect a mechanical, instead we have a quartz.  Not just any quartz, though – it’s the solar-powered V157 movement.  I rather like solar on watches, and it’s another little thing to elevate the Seiko Prospex SNE435 over other similar options.

Realistically, the Seiko Prospex SNE435 is intended for someone who wants an all-arounder sort of a watch, as well as one that they can leave on the dresser for days at a time, with it being ready for pickup and go.  Sure, you can get that from any quartz, but a simple quartz movement is going to lose out to an inexpensive mechanical just about any day, in terms of purchasing draw.  Change things up to solar, though, and the equation shifts a bit (at least in my ledger).

In many ways, the Seiko Prospex SNE435 is a watch that fits both what I like today, as well as what I have liked over the past few years.  It scratches that dressier, relatively compact (it wears smaller than the specs would suggest) itch I have these days, while still fulfilling that diver/tool watch go anywhere, do anything, fit into any scenario that has always been on my list of criteria.

Is the $395 Seiko Prospex SNE435 a perfect watch?  Well, no, it isn’t.  The bracelet has a little bit of that jangle to it, and I wouldn’t have minded a few millimeters shaved off of the diameter and thickness.  Those are quibbles, though.  There’s a lot good here – it’s a capable watch, it has a color and finishing scheme that is both striking and unobtrusive, and it’s a watch that should just plain work, whether you’re at the office, the beach, or off somewhere in a suit.

In many ways, I’d say this would be a rather viable alternative to our default Monster recommendation, particularly for someone who wants to have – and wear – just a single watch, day in and day out, and just wants something reliable and good looking.  Will the Seiko Prospex SNE435 warm the cockles of the jaded watch snob heart?  Probably not – but I still think there’s a good case to made for it, and I’m pleased I spent time with it.  seikousa.com