Lighting things up with ASP 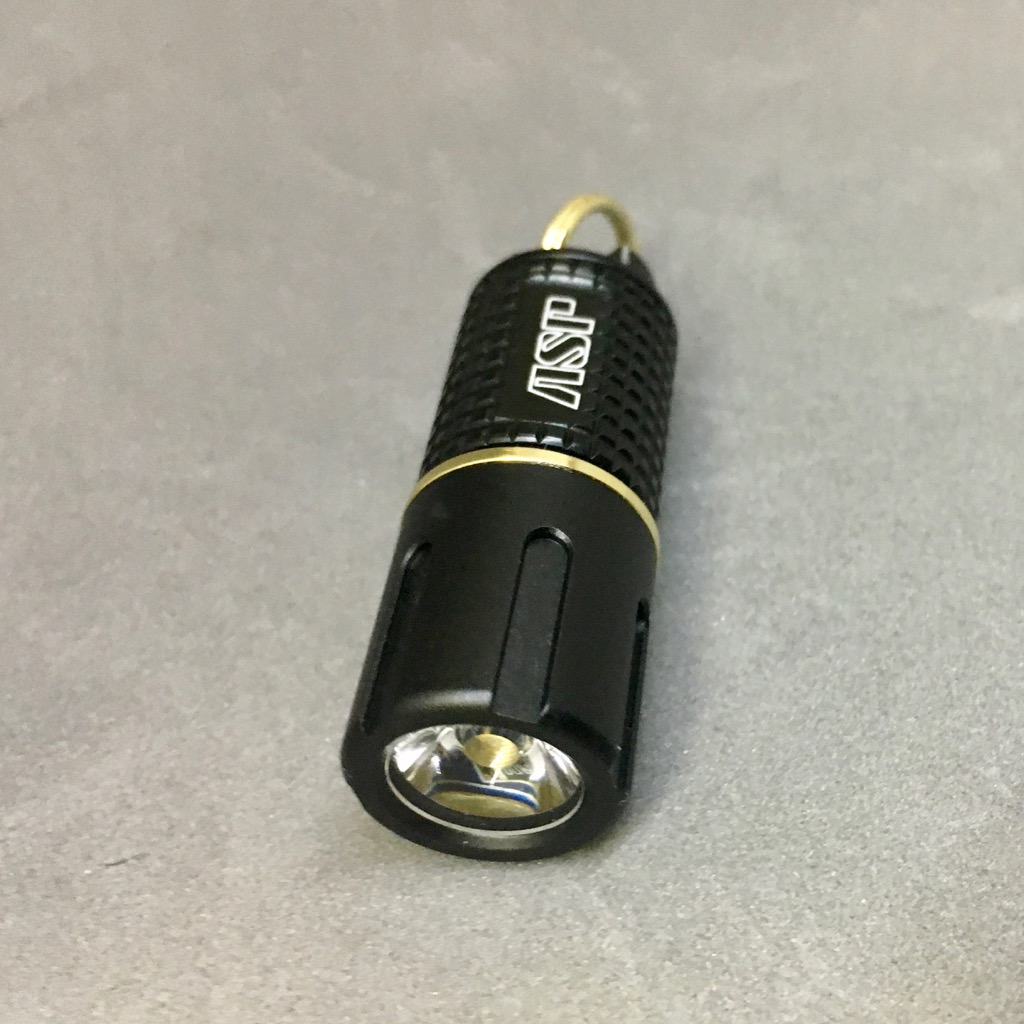 You know we like our watches here, right?  We also like all sorts of other “guy stuff” too, as our forays into jackets, boots, and other accessories have shown.  Well, most of us like to turn some of our attention to detail to the stuff we have bouncing around in our pockets, also known as our every day carry (or EDC).  Given that, and that now we (in the northern hemisphere) are in the long, dark nights, we thought it made sense to talk about some flashlights.  Today, we’ve got two options for you from ASP.

So, how did I come across Armament Systems and Procedures (aka ASP)?  Funny thing, that.  We get all manner of unsolicited press releases crossing our digital desks, and most of those hit the trash can in a hurry.  When the one from ASP came in, though, it got my attention.  I reached out to the brand, and then here we are today.  While they tend to focus on items that are geared for law enforcement, us civilians can certainly take advantage of what they’re producing as well.

The first item we were sent from ASP fits very firmly into the category of EDC (and in fact, that’s where it lives on their site) – the ASP Dot USB.  This is a flashlight (available in blue, red, or black) that will fit into any pocket (even that coin pocket on your jeans) or, more likely, on your key ring.  That’s where I ended up putting the Dot we were sent, simply so I didn’t have it falling out of my pocket and getting lost.

Now, there are all manner of flashlights out there that want to be in your pocket.  Those cheap button cell ones that you squeeze to light up, for instance.  Those are good for lighting up a key slot, but not much else.  Or, there are larger ones like the Nitecore Tube, which I actually carried for a while.  At 45 lumens, it gives off more light, but it’s still pretty localized.  And in my case, with the button used to engage things being on the large flat surface, I often found it accidentally turned on in my pocket, running down it’s battery.

This brings us, then, to the ASP Dot, which features a twist on/off function, very similar to my main camping flashlight.  I find this to be intuitive, and not likely to be accidentally turned on in your pocket.  And with the Dot, that’s a very good thing.  You see, this tiny little light (made from 6061 T6 aerospace aluminum) features a Cree XPG2 LED, which allows it to put out 130 lumens (this article over on REI may help explain some of this terminology).  In laymen terms, that means you have a very bright emitter creating heat in a very small package, which means your pocket would heat up in a hurry.  In fact, in the packaging, it warns against covering up the light when it’s on, due to heating concerns.

So, while the ASP Dot carries that warning, it’s something I wasn’t too concerned about.  And, with it pumping out as much light as it does, I’m willing to accept it.  You might ask, well, why do you need a light light this?  To be honest, you probably don’t, as most cell phones can use their camera flash in a flashlight capacity.  For me, though, I like to leave my phone battery for phone things, and use a dedicated flashlight (not to mention, it’s a lot easier to hold a flashlight in your mouth than a phone).

If you’re carrying a flashlight regularly, you want something that’s compact and not adding a lot of bulk, which the 0.5 oz ASP Dot certainly has in spades, and still gives off a good amount of light (again, aces here, with the specs calling out a 43-foot beam).  That then leaves a few other concerns, one of which is the battery.  If we’re not talking button cells, then we’re into smaller AAA batteries (still decently long) or things like a CR123 (shorter, but wider) for power.  Or, you could go the route like we have with the ASP Dot, and rely on USB charging.

You simply fully unscrew the head of the light, and there’s the USB charging port waiting for you.  Plug it in, and a light at the end of the body (which would normally be covered) lights up amber to let you know it has power; once fully charged, it switches to green.  Once fully charged, the specs state you should have a runtime of 25 minutes which is pretty spectacular for a light of this size and brightness.  Then again, this is something you’re probably using pretty sparingly, so I think one could easily go a few weeks, if not a month or more, between charges.

Another concern you might have is covering the LED.  Some inexpensive ones leave the LED uncovered, which can accumulate dirt, as well as let in moisture.  Here, the ASP Dot has a glass lens over the emitter, which helps protect the light as well as bringing in some optical tuning.  In my book, this is as perfect of a keychain light as I’ve come across.  And sure, at $37, it costs a touch more than most of those LED lights you have in the impulse buy section of the checkout line at the hardware store.  Given my (albeit limited) time with the ASP Dot, though, I’m fairly confident that this light and it’s solid construction will outlast anything you find there.

On the other hand, ASP is not just about tiny lights.  They’ve got plenty of larger options as well.  Another light we got to spend some time with is their just-announced (and just-released) Raven AAA (yeah, I think we’re about the first ones who have gotten to see this light).  As you can guess from the name, the ASP Raven AAA lost the USB charging we have on the Dot, and instead has gone for a two-cell configuration, this time using AAA batteries (the brand recommends lithium cells for power output, but you can use alkaline batteries as well).

When I opened up the ASP Raven AAA, I took one look at it, and thought “this is the stealth fighter of flashlights”.  This is because of the 45-facets that cover the body of the polymer barrel that the light has.  Sure, this is a styling exercise, but I think it also serves a practical purpose – it break up the body a bit.  Rather than being a perfectly smooth barrel, you’ve got something you can easily grip.  Past that, it makes for an easy-to-discern shape for your fingers to grab on to when rooting around in a bag (or in the dark) for it.

The ASP Raven AAA also brings a different interface to the mix – the end-button clicky.  The first press will bring the light on at full strength (140 lumens), and a second press (aka double-tap) will lower things down to 15 lumens (which many brands will call a moonlight mode).  This allows you to get the amount of light that you may need at the time.  For instance, are you simply trying to see next to you in the tent, or are you trying to see what made that noise on the other side of the campsite?

Oh, and another note on the tail clicker of the ASP Raven AAA.  You can do a lighter press ( to the point where it’s not actually clicking) to turn the light on, say, if you want a brief burst of light, or if you’re trying to get the interface to the lower light mode.  Then, a firm press (which will then click) will lock the light on, and you don’t have to hold the button.  Once locked on, you can have a 2 hour run time (in the bright mode) or up to 16 hours (in the low light mode).  If you should run things down, then it’s a simple unscrewing of the anodized aluminum tail cap, swapping the cells, and then off you go.

At an asking price of $48, the ASP Raven AAA is a reasonably priced, high-performance light.  Like the Dot, it features a covered Cree LED, and a form factor that’s easy to carry (though, the Raven is more likely to be tucked into a bag or jacket pocket than a pants pocket I’m guessing).  Unlike the Dot, though, the Raven does feature easily swappable cells.  Which, if you’re headed off for a week of camping, is a very nice thing to be able to do.  The inclusion of the low-light mode (shame the Dot doesn’t have that, but I presume that would raise the price and make the light slightly taller) add additional utility.

At the end of the day, I was mightily impressed with what I saw from ASP with their Dot USB and Raven AAA lights (if you want to see more photos and videos of them lighting up, check out my Instagram feed).  Both have slightly different use cases, and it will be up to to you to determine where it would fit for your needs, and then go get the light that you’re looking for.  Of course, these are but two of the lights in their catalog, so you have plenty of other options.  If there’s another one you’d like us to look at, sound off below, or join us over in our Slack channel to talk all things flashlights, EDC, and watches.  Or, you know, whatever might be on your mind.  Just don’t forget to carry a good light with you when you head out to face the darkness.  asp-usa.com

The standardized ratings for the Raven

The standardized ratings for the Dot