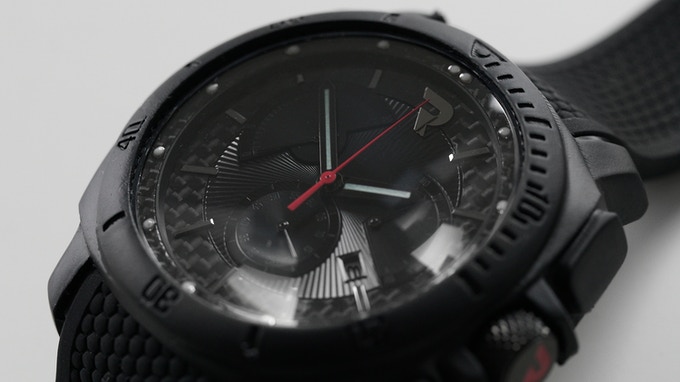 For a Kickstarter campaign for a watch to get our attention, they need to be doing something unique. I’m not saying it has to be a design that every person you know will be talking about. Just that it should be something that differentiates itself in some way other than the name of the dude “cutting out the middleman”. Well, I’d say the Rival CARBON² manages to do just that.

First, let’s talk about the case. How many crowd-funded watches have you seen go for a 45mm titanium case out of the gate? Not many, I’d wager. They’ve slimmed it down a bit, and tried to fancy it up some with the knurled bezel (as well as the capability to quick switch between steel, leather, and silicone with the straps). But what if you need to go get rough and tumble?

No worries, mate – you see, the Rival CARBON² also comes with a custom fit rubber bumper that goes over things, protecting the finish on the titanium as well as giving you a bit more of a lip around the sapphire crystal. Think of it like a cross between your phone case and the bumper things they sold for Swatches back in the late 80s, early 90s. I’m not saying it’s going to be protecting it from a whack with a hammer, but hey, that extra bit of cushion would go a long way to keeping things looking nice.

To keep the materials interesting, they’ve also gone with a carbon fiber dial on the Rival CARBON². I generally like the effect you get when printing is done on top of the a carbon dial, but that doesn’t seem to be what was done here. And, in fact, that’s one drawback I see with the design. Other than the color of the paint on the hands, the face of the watch is dark on dark on dark. Reading the time, sure, you’ll do that just fine.

But trying to read the sub-registers of your chronograph? That’s going to require a bright light and some good glasses, I think. Which is a shame, as the Miyota FS80 quartz chronograph movement will get you there on time, and should be able to time things just well. You’re just not going to easily know how that timing turned out, I’ve a suspicion.

Then again, you can get a titanium-cased chronograph for just $282 via the earlybird pricing, so there will be some tradeoffs. I like the idea they’ve come up with for the secondary bumper (in fact, there’s a Victorinox that does something similar), so hopefully they’ll get to keep going and refine their designs. For now, it looks like the Rival CARBON² is resonating, as it’s more than fully funded with plenty of time to go. The campaign closes out on February 19th, so be sure to hit Kickstarter if you’re interested. campaign page