Oblako, and what you learn from crowdfunding 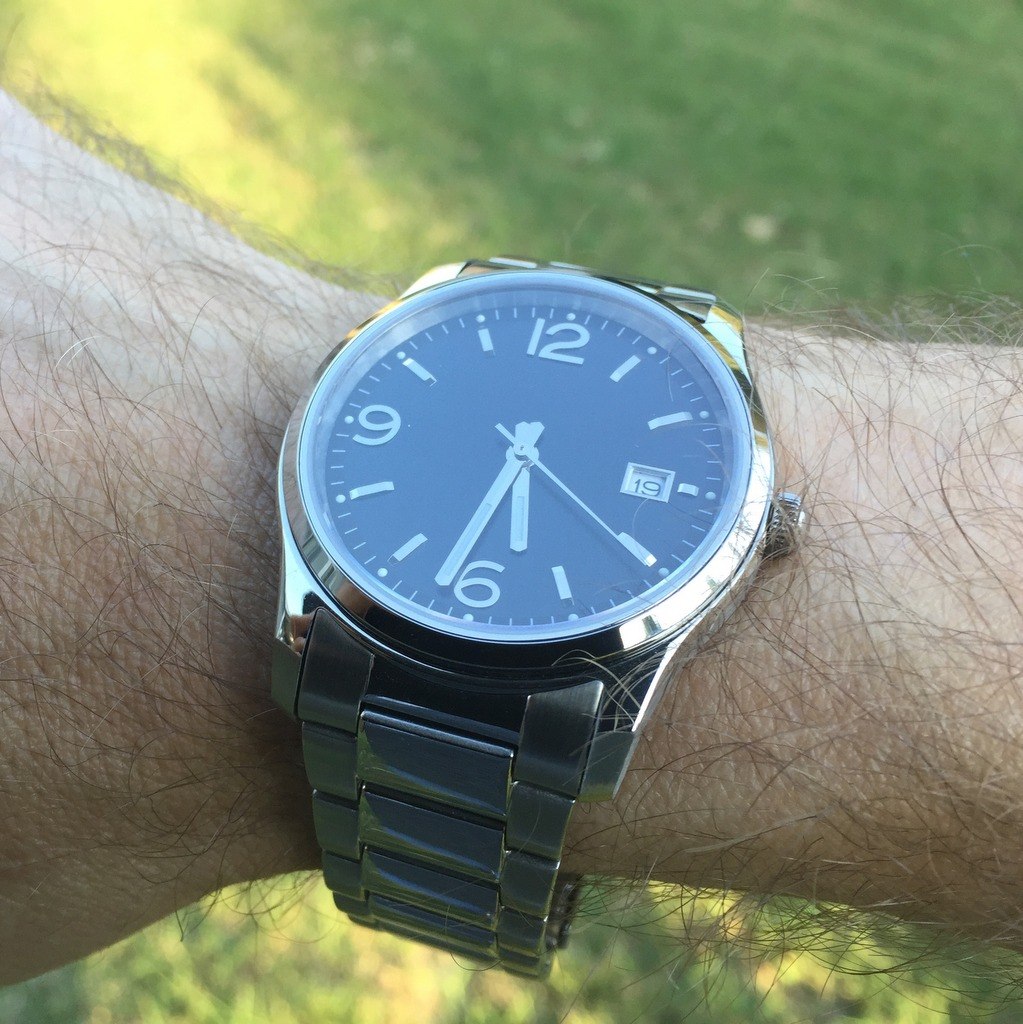 There are many watch crowdfunding campaigns, and it’s the rare ones that attempt something other than just placing an order in China that deserve respect. Even when they fail.

Brenden Maxwell has always been fascinated with watches. What makes him unusual is that his fascination is with the dial, more than the case or movement. He launched a crowdfunding project promising to make custom dials for watches using titanum dial plates with anodization techniqes to make colored patterns. At the time, he could make pretty much any color but red. What you got was a quartz watch powered by a Swiss movement, in 316L stainless steel, stainless bracelet to match, topped with a sapphire crystal.

What Brenden wants to do now is this: He bought up lots of stock of these quartz wonders so there’d be no delay in shipping to his fans of anodized titanium dials. It didn’t work out that way, and he has watches on hand he wants to sell at low, low prices. For $40 CAD (approx. $30 USD), you get a watch and a multi-tool to help resize or change the bracelet.

The supplier that Brenden ordered these from charges a lot more, starting at $195 USD for a quartz watch with stainless bracelet, so there’s a very real deal to be had by backing Brenden on his latest campaign to sell through his existing stock.

The watch isn’t amazing, but isn’t terrible, either. It’s similar to the sort of Seiko you might get for $129 USD. As said, it’s stainless, on solid stainless bracelet, with a sterile 3,6,9,12 dial. With a sapphire crystal, Swiss Ronda movement, and a modicum of water resistance, it’s definitely worth it at the $30 being asked. If you put it on a different strap, it improves significantly.

I asked Brenden what he thought he’d learned from the first campaign’s unsuccessful funding.

Brenden Maxwell: I think there is definitely seasonal popularity of crowdfunding. I believe our first attempt (raised more than the second) happened right before the holidays and a lot of people buy unique gifts from places like kickstarter or etsy. This first campaign made us feel that we could be successful with a smaller goal so we went ahead and bought watches (which was a MOQ) thinking we would sell the remainder after kickstarter. That was a huge mistake – the one I am trying to rectify by recouping costs now.

The customizable aspect of our idea made a certain direction hard and we changed directions in the second campaign. We thought a newer simplified option of pre-made designs with the option to design your own was simpler. We loved the idea of designing our own watches but some people did not…a lot of people did not. Designing was hard because we didn’t have the money for a web app or anything so you had to download open source software and our template. I think Steve Jobs said it right; “customers don’t know what they want until we show them” – The simplicity of one design is easier to showcase and easier for people to understand. You see successful watch brands coming back to crowdfunding now with new designs each time and being successful by building a legacy and a brand…we made one watch but it was almost limitless in what you could do making repeat showings hard. Then your sales channel is just you, and you have to communicate a bunch of stuff all over…leads to:

We had to try to fit so much information into a short period of time – how the watches were made (waterjets, anodization lasers, etc.) to show why they were cool, then the interchangeable design concept, then if you didn’t like those designs you can design your own, limitations of the process, etc…it was just too much for people to digest I think. When you’re showing one really nice watch people don’t care how it’s made because its value proposition is it looks nice. Our value proposition was a story and an idea. it was just too much everything. Leads to:

Our watch didn’t look as refined as a lot of stuff coming out. We thought we could get by on the whole idea of a maker movement and the watches being cool for an entirely different reason than just being pristine (handmade, lasers, recycled titanium, etc.). I mean they were fairly detailed and nice but they couldn’t have raised indicators with the process (another aesthetic imperative I now think) and they were a bit gimmicky looking back on it. We thought the story was enough “cool factor” but it wasn’t.

WWR: What was the motivation for this project? What led you to do it?

Brenden Maxwell: As you can see I’m obsessed with the dial as opposed to the movement like most watch people. Tt’s the thing you see! Watches are like the only piece of universal male jewelry and we really both like james bond lol. We also loved the idea of designing things for yourself – a representation of things that showcase your personality. You’re funky? cool do colorful zig zags with a wild pattern. More serious? California dial with a subtle 2 tone pattern. So many different variations. One thing we really liked was using the same body but different faces and using titanium for a shine. Sure some other companies print on paper or plastic but not titanium. By following a fairly uniform process we got a “look” that you could identify as one of our watches but still have it be completely individualized. Like “yea that’s an Oblako” but also “hey let me see what you chose to do” type of combination – recognition of what it was but it was always going to be relatively unique. In fact, totally unique because being hand made there would always be tiny almost imperceivable differences even between 2 idential concepts. We liked that idea of it being a custom watch and rare in that capacity but still affordable. Unique recycled materials, etc. Using our process we could also crank them out for a good price so value, accessibility and being unique I would say were our goals – we wanted to make them for average people like us. Kickstarted seemed like a great place to start because we thought that would be the location people would appreciate the tech, maker movement story (leads back to complicated, etc.)

WWR: What’s next for you and Oblako?

Brenden Maxwell: I’m moving on with life but I am keeping some watches to toy with a new idea, one that I won’t leap head first into like this time. It would solve that raised indicator problem and would use either a combination of CNC and enamel paint / powder – see the Bell and Ross Burning Skull watch:

Or utilizing a fiber laser which at the right power could both engrave and color stainless steel:

This machine also interested me – it takes old school watch making techniques and pairs them with modern computer controlled tech:

I have a lot of resources saved – videos, articles, online stores for supplies. I like thinking about it in my down time and I’m sure I will attempt something again – probably a watch. But this time I am aiming for spending a lot of money prototyping – even if it doesn’t work it will be less than investing in inventory and tech. I will also aim for a much more premium look with less ability to produce volume – automatic, etc. The fiber laser appeals to me because it can make a line thinner than the human eye can distinguish so detail is obviously possible there. Here is a link to a super premium machine used for all sorts of stuff from medical implants to aerospace:

Using a combination of machines to achieve all sorts of different stuff would be neat. Kiln fired enamel intrigues me too because of it’s premium look. I watched this video and fell in love with it. So simple but so elegant looking:

The watch will sell for $40 CAD for 1 and $70 for 2 – about $30 USD and $52 USD respectively. https://www.indiegogo.com/projects/discount-luxury-watches-watch-fashion#/