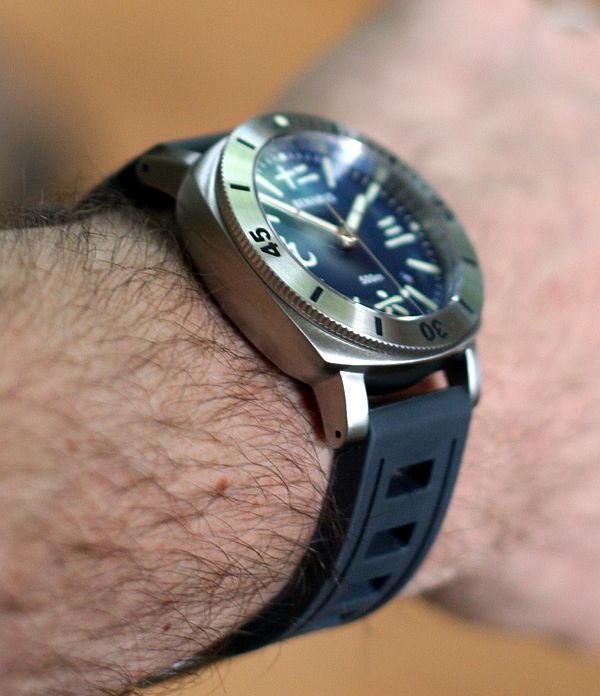 We’ve reviewed other members of the Benarus catalog for you here over the last year or so, but for some reason, we’ve not covered the Moray. Today, we’ll bring that one in to the fold by taking a look at the new 42mm version of the Moray. The Moray 42 is a smaller version of the original Moray, which came in at 44mm (there was also a 47mm version in titanium). Sure, a 2mm smaller case doesn’t seem like a lot, but it really can make a world of difference on the wrist. Inside the new case you have the Miyota 9015 (which is an upgrade from the 8215 that powered the original) which I’ve come to really like as a solid movement offering a good value (and a way to keep prices a bit lower on the watches that incorporate the movement). One of the first things that struck me with this watch, surprisingly, was the bracelet. Not so much for the styling or looks, but for it’s “feel”. I say this because it’s one of the smoothest (on the inner side) that I’ve felt. Yes, this improves comfort a bit, but it also points to attention to detail in the manufacturing process as well. Once I had the bracelet adjusted and locked on to my wrist, I couldn’t help but to get that metallic blue dial a close look. While it’s surface is flat (no sunburst or other pattern is discernible in the dial), the coloration more than makes up for it. In normal light, it’s a nice shade; it’s when you get it out in the bright sunshine where you can really appreciate the hue. It also provides a nice contrast to the indices on the dial, which come in a choice of dart,Arabic, or, as our sample had, Chinese numerals and stick indices (interesting side note: those Chinese numerals were hand-drawn by Benarus designer Steve Laughlin). Also of interest is that the date window is color-matched to the dial, as we’ve seen on previous Benarus models. We requested the Chinese dial for a few reasons. First, it’s something a bit unique, and it’s certainly not anything I’ve had on a watch crossing my desk over the past few years. It’s also a fairly “safe” change – even though I can’t particularly read what the characters say, they’re in the cardinal positions, so we know what they’re indicating. The final reason was a bit more of a personal one, as my oldest is studying Mandarin, and I thought she’d get a kick out of seeing a watch like this (and she did). Topping the dial (which also comes in black), we’ve got double-domed sapphire crystal (AR coated, of course), which is then surrounded by a uni-directional bezel. While the bezel isn’t lumed (like it is on the Sea Snake), it does have the lumed pip to help you track your timing in the dark (or in the water, as it has a 500m WR rating). In daily wear, I found the watch to be a great size, as the 42mm (14mm thick) seems to hit a sweet spot for me; while it’s not the lightest watch (just over 7 oz on the bracelet, or just under 5 oz on the rubber strap), which is to be expected for a stainless steel case, I didn’t find it to be a hindrance or noticeable. The watch was also quite comfortable, between the curved lugs and the aforementioned smooth bracelet. I also found the included rubber strap (our sample came with a grey one) to be comfortable. To be clear, this is a true rubber strap, not a soft silicone one, so you don’t have any of the issues with the strap picking up every stray piece of lint. The buckle also picked up an interesting bit of style, looking like a sort of small airplane wing. It might add a touch to the bulk, but it is a interesting buckle I’ve not seen before. I should also note that the grey strap really changes the character of the watch. It gives it a bit of a sportier feel, and is certainly something that will work well in the water. Whichever of the dials you opt for (dart, Arabic, or Chinese, black or blue), the watch comes standard with the stainless steel bracelet, and your choice of a rubber or leather strap. Pricing comes in at $680 for all of the models except the PVD; for that one, the price is $730. All told, it’s another compelling dive watch option from the folks over at Benarus. Yes, it’s a little higher than the $500 sweet spot we’ve seen this summer for dive watches, but I think we’re well within what this model (and Benarus as a whole) has on offer, in terms of a bang-for-your-buck measure. Oh, and if you’d like to read about how this model works being used in an actual dive, check out this article over on aBlogtoWatch.  benaruswatches.com