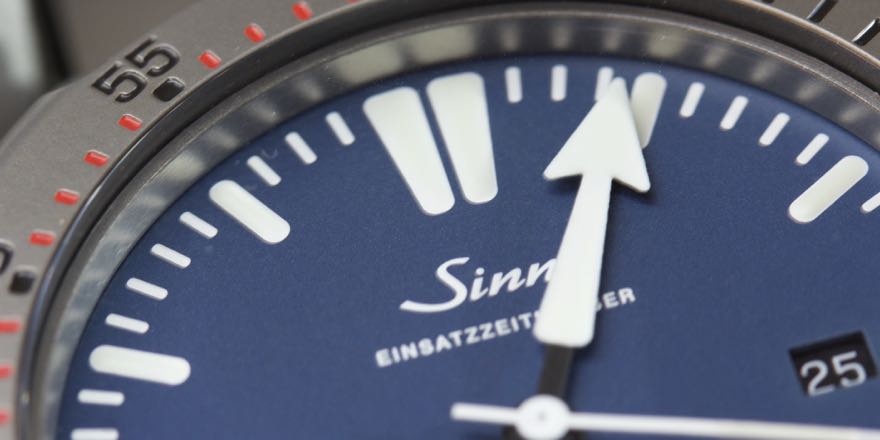 WatchBuys is an on-line retailer of German Watches, where the watches they represent have a limited or non-existent retail presence.  With limited ability to go into a store, it is tough to really get a feel for the quality and, frankly, beauty of these watches.  Hence, a road show.  The events are invitation only, but all you have to do in order to get an invitation is ask.  There are no sales whatsoever at the WatchBuys road show events, it is all for watch lovers to check out these smaller brands.  This past weekend they were in Los Angeles (Pasadena to be exact), and I checked out the wares.

The events are by invitation so they can limit the number of attendees at any one time.  For our event (I don’t know if they always do it this way), we were asked not to tell where the event was taking place, but rather meet in the lobby of a hotel where we would be escorted to the event.  Reservations are spaced out in one-hour increments, though there is no rush to get you out the door after an hour.  From the lobby, we walked over to a villa where 80 or so watches were laid out on the tables.  The majority of the watches were by Sinn, but there were several from Nomos, Junghans, Hanhart, and some smaller boutique brands.

The WatchBuys road show itself is very cordial.  If you have never been to a meeting of watch lovers, whether you make it to one of these events or not, you should try and attend some sort of meet-up.  This was the second one I have been to, the first was an Omega event, and it really is fun to be in the room with a bunch of people that are excited about the same things that excite you.  When you flip over a watch to examine the beautifully hand decorated movement, no one is asking how you can justify spending $1,000s on a watch, they are all knowingly admiring the work.

I didn’t count the number of watches, but I would guess that about 50 of them were Sinns (OK, I counted from the pics, there were 44), including a number of their newest movements.  Since all of them are new, you are asked not to adjust the straps, but you are welcome to drape them over your wrist and try the various adjustments.  I don’t envy the crew in having to hand wind all the automatics and manual watches to keep them ticking at the event.  The watches were grouped by the brands, with a second small table dedicated to the new releases for Sinn.

With this many watches on display, and a limited time to check them all out, I gravitated to a few pieces, at least one from each brand, which will each get individual write ups in the very near future.  From the Sinn line-up, the first watch I laid eyes on was actually the one that I spent the most time with, the Sinn T1 with the new blue dial and a titanium case.  It is available with both a titanium bracelet and a silicone strap.  The Sinn silicone straps are meant to be cut and matched to a deployment clasp, so the ends are segmented with a series of channels where a pin would be fitted.  Each of the channels is shipped with a flush pin inserted already, which gives a bit of extra heft to the watch (they are removable), but also protects the channels from accumulating dirt.  when you size the strap and cut it, you then push out the end flush pin and insert a normal, pin, then connect it to the clasp.

Nomos Glashütte is a brand that, for me at least, exemplifies all that is right with the trends in minimalist design.  I was hoping to check out the Metro, but instead fell in love with the Ahoi.  There are dress watches on the market in this range that are just as lovely as the Ahoi, but I would be hard pressed to find one that I preferred to this one (The Metro is exempted from this competition).  I don’t wear a suit very often, so a formal watch isn’t something I need, but this could pair with anything from a bespoke suit to jeans and a polo on the weekend.

There were a couple of Hanhart watches that caught my eye, but the Pioneer MonoScope Single Button Chronograph was probably my favorite.  I have had the opportunity to check out a number of chronographs recently, and I really appreciated the solid feel of the pusher here, and the fact that there is only one of them.  OK, it is not useful for a lap times (the Twin Dicator would be a good choice if you need that function), but how often are you taking lap times with your chronograph.  The vintage military styling of the watch is not something that was done for trends, the brand is 130 years old.

If you like simple watches with radically domed crystals, then you should check out Junghans.  The Max Bill Chronoscope was another beautiful minimalist design on display at the event.  This is not just another Bauhaus-inspired look, the designer of the watch (Max Bill) studied under Walter Gropius, who was appointed master of the Grand-Ducal Saxon School of Arts and Crafts in Weimar and then transformed the school into the Bauhaus deign academy.

Finally, the star of the event, at least for me, was the Jochen Benzinger Zeitsprung, a jumping hour watch with one of the most beautiful hand wound movements I have seen (especially considering the price).  It is a true jumping hour with precise action and amazing detailing throughout the watch.  The guilloched dial is finished by hand, and it is captivating.  Jochen Benzinger is a true artisan who provides work for other watchmakers in the industry who need the type of hand engraving or hand guilloching that is rare in today’s mechanized world.

Honestly, this was barely a sampling of the watches on display.  I am sure that there were plenty of people who came to this event, or one in another city, and spent the hour obsessing about other watches on display, never more than glancing at the ones that caught my eye.  One of the attendees had a Sinn, now discontinued, which he purchased from a collector.  The representatives were able to talk to him about that specific watch, and even offered to see if they could track down some of the original accessories that were sold with the watch, but were missing when he bought it.  He was interested in the pilot watches from the brand (seeing how he was a pilot himself), and probably didn’t pay much attention to the divers which I liked.

You can check out the schedule for upcoming WatchBuys road show events, and then register for the newsletter to keep track of the upcoming events.  The next show is in Atlanta (registration is now open), followed by Washington DC, Houston, Austin, New York, and so on.  If you are in Los Angeles, maybe I will meet you at the next show here in town.  And if you have been to one of these events, or purchased a watch from WatchBuys, I invite you to comment below on your experience.