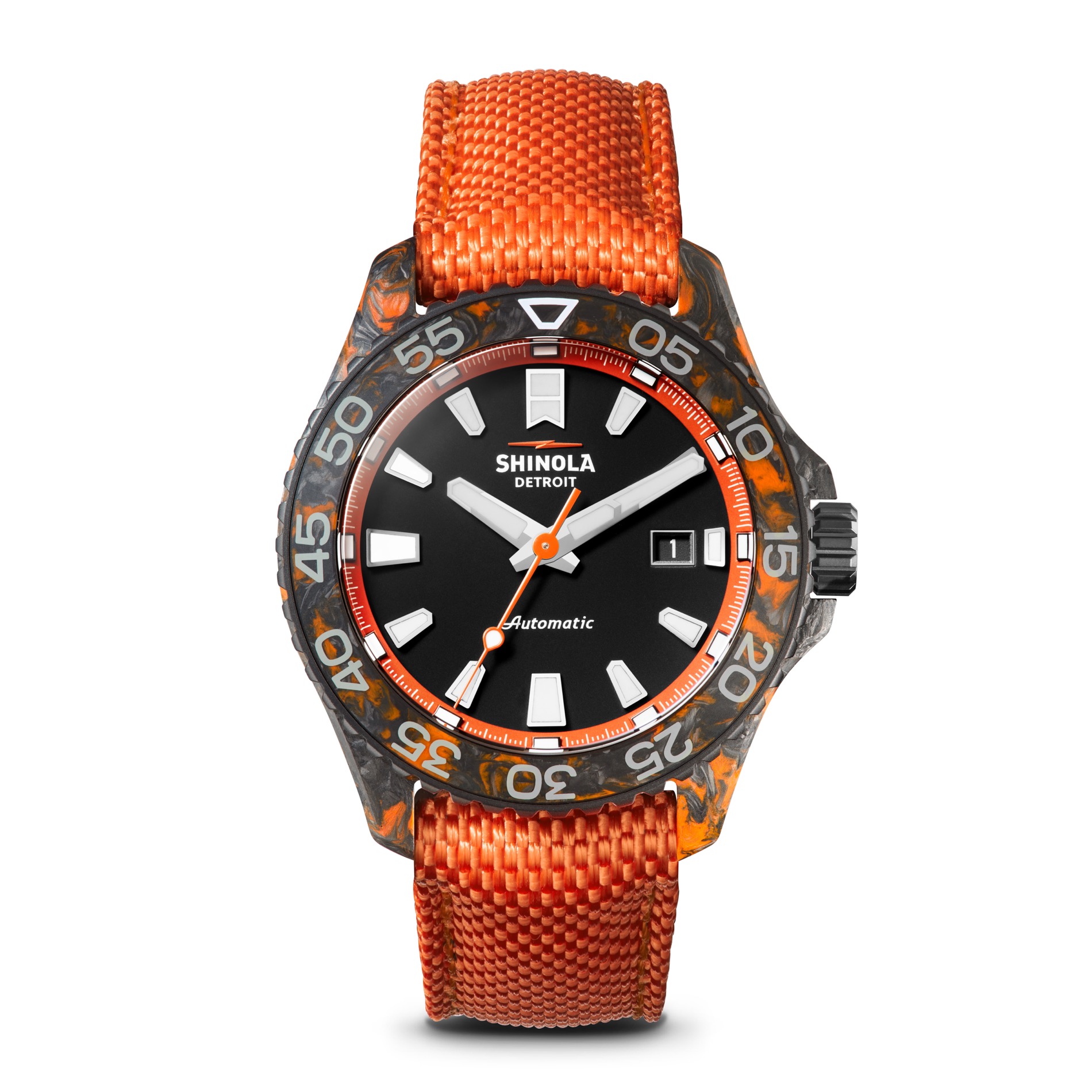 Over the past few years, I’ve been rather vocal of my support of Shinola, a brand that hails from the same part of the Mitten State that I grew up in. In addition to touring their factory, I’ve reviewed just about every watch collection that they’ve released (you can see those here). I was rather to see them introduce automatic movements with their Monster lineup (my favorite of the bunch is reviewed here), and now they’ve done something new for that lineup yet again, with the Shinola Forged Carbon Monster.

Obviously, the big change here is the usage of forged carbon fiber for the case. By using the “forging” process, they’re able to form the case shape that we’re familiar with, which then gives us a case that’s not only lighter than any steel case would be, it also ends up being stronger than titanium. Past that, it gives a rather unique look and feel, especially here, as they’ve mixed some orange into the material that they mixed up.

Now, we’ve not seen the Shinola Forged Carbon Monster in person, but I have handled forged carbon watches previously (you can see that here). Simply put, it’s a fun material to see in a watch, and you do a sort of mental double-take when you realize that the case is so much stronger than any plastic-encased one you might have banging around the house. In terms of how the watch will be (aside from the case), our review of the Shinola Lake Michigan Monster will give you the relevant info.

As compared to the steel versions, the Shinola Forged Carbon Monster is slightly bigger (about 2mm larger in both diameter and thickness, but about 10% lighter). It’s also going to be a bigger dent into your bank account, as this version is running $2,995 (as opposed to $1,250 for steel versions). As my fellow editors here have noted, Shinola does command a premium (in their pricing) as opposed to other brands. When I asked about the more-than-double price here, I was informed it was due to the forged carbon being used here. When you compare it to other brands, it’s falling more-or-less in line with other forged carbon offerings (the Victorinox Inox being about half the price, while the Doxa Sub 300 being a good bit more).

I just point that out for some context – because yes, if you want forged carbon at lower prices, you can find it out there (the Tempest being the best example of that). And if you want a Shinola Monster at a lower price, you can certainly do that as well by opting for the steel case. If you’re looking for something a bit funkier, though, then the Shinola Forged Carbon Monster might just be what you’re looking for. Me, I’ll be curious to see if the material jumps over to one of their other lines that don’t already offer pops of color in there, as a way to bring something different into the mix. Why not the Runwell? Then maybe we could see how scale could bring the price down, one day. For now, though, this particular bit of carbon fiber remains in the luxury range, while the watch itself is regular production – not limited edition. shinola.com