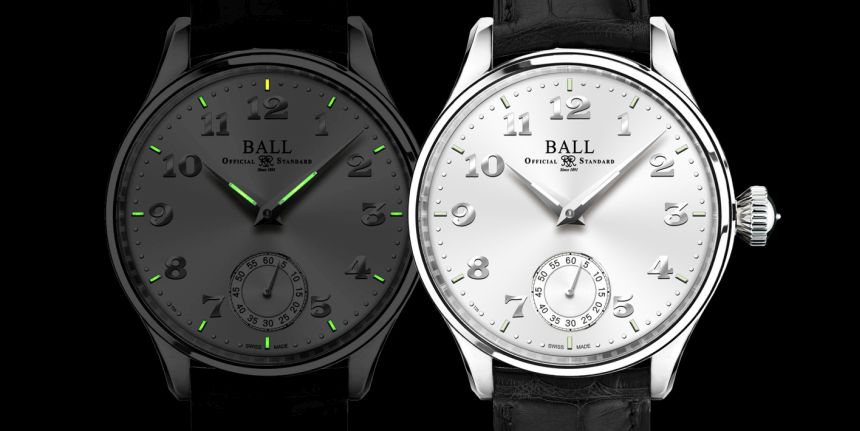 I will be the first to admit – I am a sucker for watches that include tritium tubes.  While many of them definitely hit more of a tool- or sport-watch feel, there are ones out there that take things in a more classic, or even dressy, sort of a style.  I like that juxtaposition of a classic bit of watch styling mashed up with, well, atomic age technology for illuminating the watch at night.  While they live in the luxury end of the segment, the watches from Ball certainly fit that bill, and their latest, the Ball Watch Trainmaster Cleveland Night Express, looks to be another interesting iteration.
If you have spent any amount of time perusing the Ball catalog (as I have) you will realize that, though there are some clear delineations in the product lines, when you dive down into one (say, the Engineer line, or the Trainmaster) things get a little bit muddier.  For me, I do not end up concerning myself about the small details (at least at first), but focus in on the larger stylistic differences between them.  Then, if you’re a buyer, you could pick out the ones to sort of compare and contrast to see what works best for you.  For me, the Ball Trainmaster line represents their dressier watches, and ones that tend to have a bit more of a classic look to them.

On the Ball Watch Trainmaster Cleveland Night Express, this takes the form of the polished hands, numerals, and indices on top of silvery dial; in particular, the font of the numerals really gives it an older vibe.  The neat thing about a design like this is that, while the tritium tubes are included, they are almost invisible in daylight.  Yeah, they’re there, but they simply look like hour indices and lume strips on the handset.  Then, when things get a bit darker, that magical little light show becomes evident.
The basic dial design on the Ball Watch Trainmaster Cleveland Night Express hearkens back to a pocket watch the brand has in their historical catalog; that’s how we arrived at the numeral selection and the styling of the sub-seconds, as well as the crown design.  Of course, the movement has been upgraded since that original, though it is still a manually wound one; in this watch, it’s the Ball RR2101.  For  a watch with styling like this, the manually-wound movement makes thematic sense, and then leads to things being a bit more compact as well; the 44mm case comes in at a thickness of 11.55mm.

Is the Ball Watch Trainmaster Cleveland Night Express for everyone?  No, it isn’t, I’ll admit – the styling of it is definitely “old school”, and while it appeals to my sensibilities, I realize it may not be the same for everyone. It does, however, represent another more entry-level offering from the brand, with pricing set at $2,799.  Can you find a vintage-style dress watch other places?  Sure, you could, but then they would not have the shock resistance or the tritium tubes that the brand is known for.  ballwatch.com