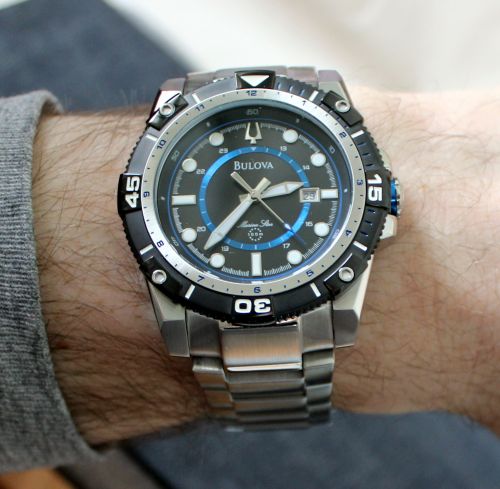 Within watch brands, you’ll find a wide variety of watches covering different styles and tastes. Less common is that variation within a product lineup, but for Bulova, that’s exactly what we have with their Marine Star collection. While there are dressier pieces, and ones that have chronograph complications, today, we’ll be looking at something that embodies the sport watch ethos.

For me, that means a bold steel watch with a simple three-hander layout, as well as a functional bezel. And, what do you know, the Bulova Marine Star 98B177 (yes, the model number is how they’re differentiated) marks of those checkboxes easily. The large, angular case is made of steel, and carries a matte finish (another nod to sport practicality). This bigger case then allows for an interesting sort of marking layout. At the inside edge of the bezel, you’ve got the the 12-hour time scale printed. Slide down onto the rehaut, and you’ll see that they’ve printed the 60 (minute or second, your choice) scale; then, on the other side of the lumed pips, you’ve got your 24-hour scale present. While it’s not uncommon (at least for the watches I’ve reviewed) to have one or two of these showing up, it’s rather less common for all three to be printed out on the dial. It’s also not at common that you have a dimensional appliqué used to mark out the minute intervals between the the larger indices, but that’s precisely what we have here. At first glance, it looks just like a printed track, but when you actually get in there for a closer look, you can see that they’re raised and have some dimensionality. While this isn’t a deal breaker, it is a nice bit of detail that will certainly catch the light differently than a screen-printed track would. This is all set on a dial that’s primarily a dark argent in color (almost black, depending on the light), which itself has a matte finish. Bulova thought to break up what could have been a boring expanse with a blue textured ring in the center of the watch (this would have been a great way to build in a GMT readout, IMO). And while most of the watch features matte finishes, the lume filled hands are polished, which makes it rather easy to pick them out. Well, ok, the white hands against a dark background aren’t exactly hiding in there, either. One thing I did wish hid in a little better is, well, can you guess what it is? That’s right class – it’s the date wheel. While it’s not as egregious as some other examples, given the white indice it aligns with, it’s still a little bothersome. Perhaps if the cardinal point indices were wider (to match the date wheel height), then it would blend in a bit better. For those of you who want a quick-glance date readout, though, you can get that here, as the window is surrounded with a polished square, making it stand out particularly easily.

In daily wear, the Marine Star had a fairly comfortable fit. As you would expect from a steel watch of this size, the weight is definitely on the higher end (186g), which, while a little surprising for a quartz-driven timepiece, it’s not totally out of line for what I’ve come to expect from this segment. I found the handset appropriately sized (and proportioned), which allows them to hit their respective hour and minute tracks, allowing you to get an accurate read of the time very quickly. It also carries a 100m WR rating, which is good – as I’ve said before, if a watch labeled Marine Star can’t go underwater, we’ve got some problems. As to the overall functionality, the watch worked just as you’d expect it to – reliable Bulova accuracy. The bezel is a fun one to play with, and though it’s plastic, it doesn’t detract from the overall style of the piece. It actually helps to mute down the front side, which can help cut down on the glare you can sometimes get from a wide expanse of steel on the front of a watch. It would’ve been nice had at least the triangle on the bezel had luminous paint applied, but that’s all it would be – a nicety, as it’s exclusion doesn’t necessarily detract from the watch’s utility, as I don’t imagine this is a watch many would use for night dives. All told, this is a decently capable watch. Yes, at a price point of only $325, some sacrifices in the design are to be expected (ie, the plastic bezel). The styling of the piece is pretty cohesive, in terms of finishes and colors utilized, and I would say the watch falls just this side of being called a fashion watch. Yes, some may think it goes over that line, but I really don’t think it does. Frankly, if the quartz movement was swapped for an automatic, and the material of the timing bezel were swapped out, I think this is a three-hander that quite a few folks would snap up. If you’re in the camp, then I say, don’t let those two things overly sway your decision – appreciate the watch for it’s affordable self. bulova.com