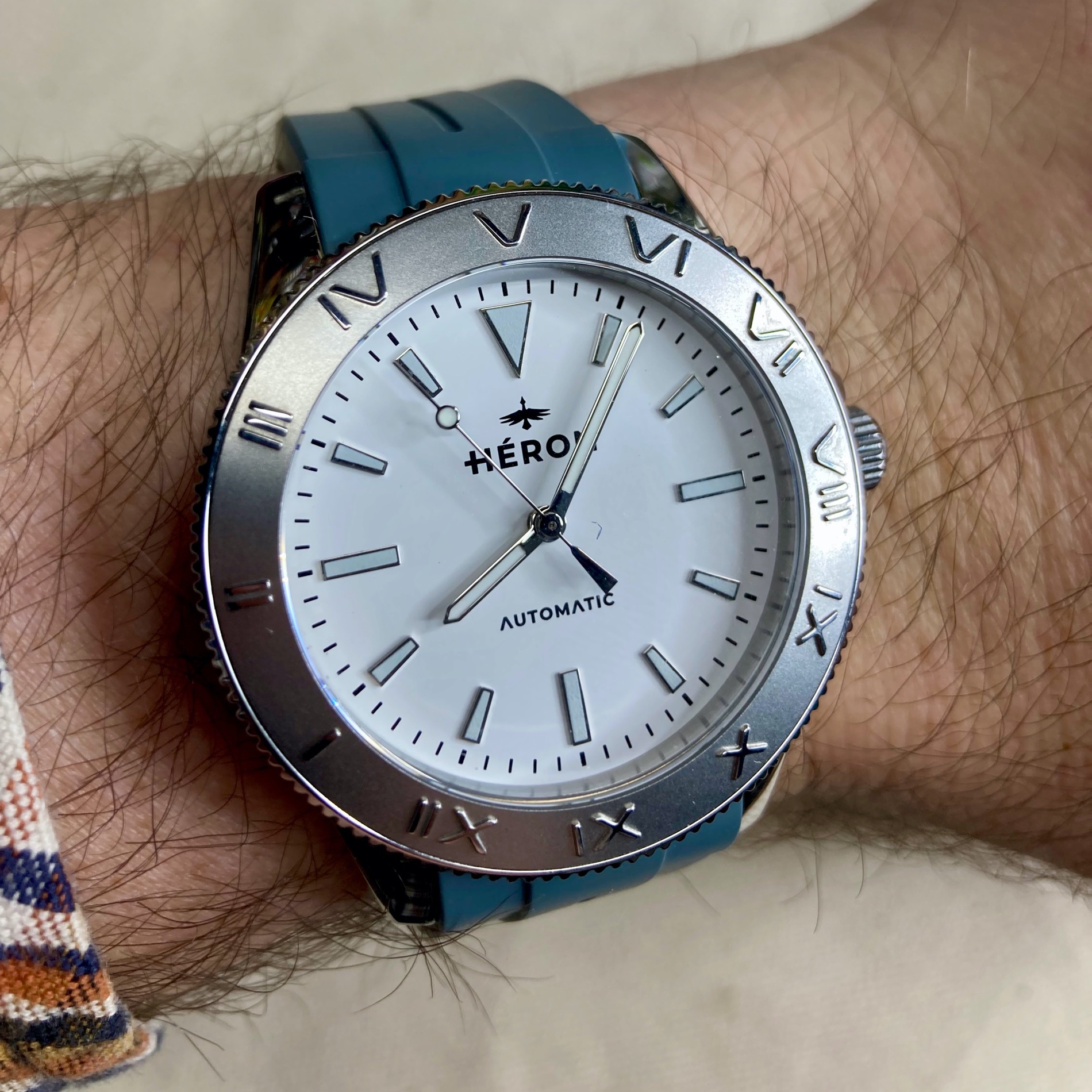 The challenge for a watch brand launching on Kickstarter is to make their watch stand out and not feel like another parts-bin assembly special. It’s a tricky path to walk, as if you make it too wild or too boring, you won’t gain customers as you’re starting out. So, you need it to be safe, but not a snoozefest. A lot of that is in the eye of the beholder, but the Heron Gladiateur seems to do just that.

Well, except for the name of the watch. I get that the Heron Gladiateur is riffing on the Roman numerals on the bezel, but the spelling feels just a bit too forced for my liking. While the watch is just a three-hander, they’ve got several recognizable design elements that you can pick out.

Actually, a good deal of the design seems to come from someone looking at Rolex watches they like, and pulling bits of those into the design. The inverted triangle and Roman numeral bezel are the big keys, but even how they’ve managed to do the curved ends on the strap look like a Rolex implementation. As to whether or not that’s a good thing, you’ll have to decide for yourself.

The dial of the Heron Gladiateur, I rather liked. I tend to be partial towards applied stick indices, and the triangle is a nice addition to the mix. Even with white-on-white, as our loaner was, things were still perfectly legible. The handset seemed to pull it’s width from those indices, so it works in that sense, but making them just a touch wider might help with that quick-read capability.

As I mentioned, the Heron Gladiateur has a strap that’s got curved ends, so it snugs just right up into the case in the lugs. While I didn’t test it out, they also plan to have metal lug inserts that would allow you to fit in the 20mm strap of your choice, without needing to get one made to fit the case shape, or go with the gap between strap and case. It does definitely elevate the look and feel of the watch, having the strap fit so well against the case.

Tucked inside the case, you’ve got the known-quantity of a Miyota 9039 keeping the time, well, on time. It also helps to control the costs, which is critical for a brand just starting out on Kickstarter. When the watch launches on Kickstarter on February 28, the super-early bird pricing is $250, a tidy discount against the MSRP of $475. At the end of the day, the Roman numeral bezel just wasn’t for me, but to each their own. To be notified on launch, head on over to HeronWatches and sign up. And as always with Kickstarter, caveat emptor.