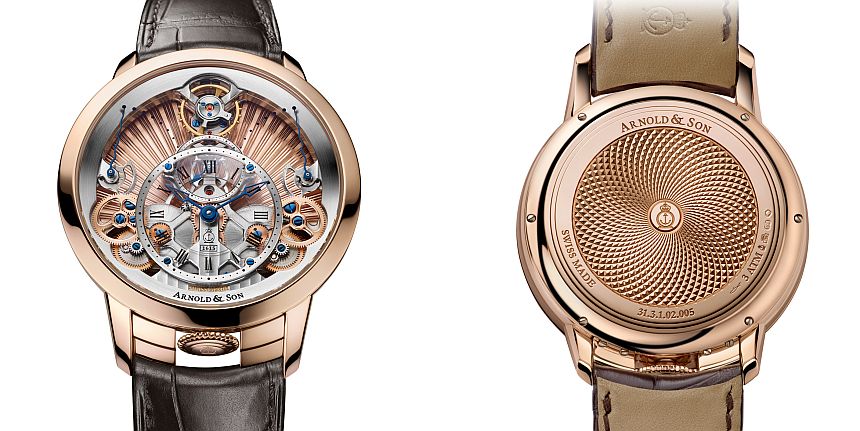 I like to think of WWR as the home for affordable wrist watches, with occasional forays into the higher end pieces. Those forays are generally due to something rather unique and interesting coming up, and the Arnold & Son Time Pyramid Guilloché certainly falls into that category. Working with interesting displays of movements on the dial is nothing new for the brand, and this latest iteration of the Time Pyramid ups the game in terms of finishing. Of course, the Arnold & Son Time Pyramid is so named due to the arrangements of the elements of the movement in a basically triangular arrangement. With this version, rendered in rose gold, we have the addition of some rather lovely guilloché patterning. On the dial side of the case, this takes the appearance of art deco sun-rays which, when combined with the movement, creates a rather stunning visual. Flip the watch over, and you see another guilloché pattern, which reminds me of what I would constantly try to make with my Spirograph as a kid, but could never quite get to. Along with the stunning bits of the case, the movement itself contains plenty of hand-finishing and small details that will give the owner plenty of reason to pick up a loupe (or a good macro lens) to dig into all of the details contained. Of course, this sort of craftsmanship does not come cheaply. If you are looking to pick up an Arnold & Son Time Pyramid Guilloché, you’ll need to bring along $46,950 (for comparison, the “standard” model runs $43,200 in gold and $31,900 in steel). Then again, if you are getting into pricepoints like this, something with this level of visual interest (and sheer technical wizardy to build it) are criteria that should be high on your list. For the rest of us, it falls into the category of “hope to see one some day”. Let me know in the comments – if you had the ability to spend on a watch like this, would you? Or would you pick up something else? Just curious, as sometimes those sort of thought exercises can lead to some interesting revelations. arnoldandson.com One thought on “Introducing the Arnold & Son Time Pyramid Guilloché”