The Javelin Dayrunner Combines Two Watches In One 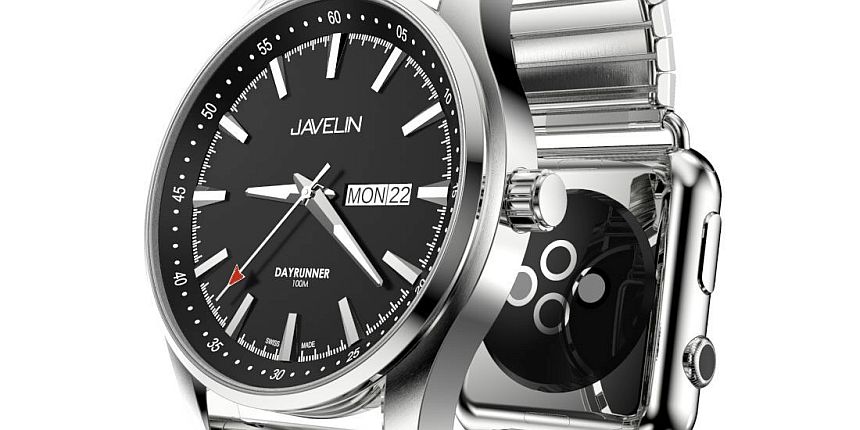 When it comes to smart watches, there is no denying the amount of weight the name the Apple Watch carries in the segment (even if there is some question as to how well it is selling). For me, wearing a second device (or something that completely displaces a standard watch) is just about a non-starter. When you get into things that add a phone connection to the strap (like we saw on this TokyoFlash), then the argument becomes a lot more compelling. I have a feeling that we will see more of this sort of combination, and the Javelin Dayrunner is one of the latest to come to my attention. To be sure, the Javelin Dayrunner is not the first watch that we have seen combine a “regular” watch and an Apple watch (check out this almost comically-priced one, the Nico Gerard Pinnacle, here). Where the Javelin Dayrunner has the advantage is (aside from price) the fact that it can handle both sizes of the Apple Watch, as well as two variants of the Pebble (Classic and Time). This is done via the bracelet, for which you select the appropriate option when you place your order. What you end up with is a classic three-hander with date on top of your wrist, and the smart watch under your wrist. Or, the other way around, I suppose, but that would seem to defeat the purpose. What is the purpose? To give you classic styling on your wrist, while still allowing remote phone notifications (and everything else the smart watches enable) and use of sensors on the second device. This does mean that the smart watch is taking the place of a buckle or deployant clasp, so the question then becomes how you put the thing on. Simply put, the bracelet used here is one of those expanding types (ala Speidel) so you can easily slip the whole thing over your wrist. Sure, some clever usage of a deployant (with the clasp then being on the side of your wrist) could perhaps be attempting, but the curvature would become a lot more important is it would be rather inflexible. So, for now, I think the expanding bracelet is about the best route to go. Ooh, or they could use a mesh bracelet and clasp sort of like what we see on the Mr. Jones Chatterbox. Now there’s an idea… They are also (wisely) including a standard leather strap for the Javelin Dayrunner, which means you can swap things back to a standard watch should you not want the bulk (or notifications) of the smart watch with you. As to the watch itself, it is a fairly cleanly-styled three-hander with a day/date display, and what look to be lumed hands (indices seem to just be polished). Then again, if you are checking the time in the dark, the smart watch is probably the easier-to-read option here. We were unable to find out the specific movement used by time of publication, but the brand states it is a Swiss Quartz, so there should not be any issues with reliability or accuracy. This also means that pricing is kept down, with the Javelin Dayrunner currently on offer for $350 (regular MSRP is $500, and the pricing goes to that as of September 8th). If the Javelin Dayrunner were offered by itself, I (and probably many of you) would likely balk at paying $350 (let alone $500) for a quartz (a Ronda 517 in this case) watch from an upstart company. Here, the value-add is of course the ability to get the smart watch of your choice into one convenient (single band) package. While I personally have become more accustomed to double-wristing watches, I know it is not for everyone. To that end, something like the Javelin Dayrunner is a good start. Long term, I think these connected notifiers on a strap or bracelet are something we will see more of. Frankly, even selling these bracelets alone would find a market, especially as folks new to the world of watches (introduced to it by their smart watch) start casting about for ways to step up their watch game, as it were. We are definitely taking baby steps here, but it looks like they are in the right direction. javelinwatches.com