No One Should Start A Kickstarter Project On A Friday 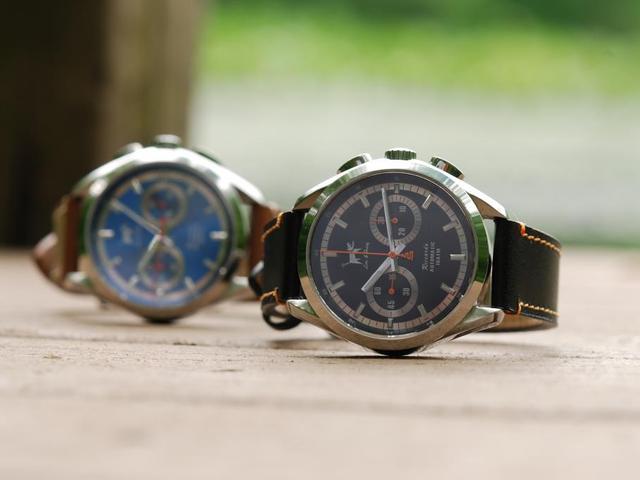 But I guess these guys haven”t figured that out – good thing we”re telling you about it on a Monday, eh?  Any which way, our buddy Matt H has been on the search for an inexpensive automatic chrono, and ran across this one on Friday.

I have been wanting to pick up a relatively inexpensive automatic chronograph watch for a while.  I know I can buy all sorts of nice looking quartz chronos, and no, I am not looking for a $200 watch, but I would like to pick up a nice, clean, well built chronograph for under about $800 or so.  Somewhere around $500 would really be ideal.  So this caught my eye.

Now it is a rendering, not a prototype, so that give me a bit of a pause (EDITOR”S NOTE:  I thought you had to have an “in the steel” prototype for stuff like this on KS?).  The details on the watch are good, though not spectacular.  It has a stainless steel body, domed sapphire glass (their term) an exhibition caseback, 10 ATM of water resistance, an automatic movement, and a $450 price tag. Apparently, they pre-launched this about a month ago on their own web site (for more than the Kickstarter price) and also posted on WUS, with 2 threads each with 10 pages of comments.  What makes me hesitate are the following issues:

So I am going to watch and ponder this one for a bit.  Based on the project page, he has already picked up 40 pre-orders through his initial offering.  The one last thing that bugs me, and I don”t want to rant on it, is this watch is certainly not “likely to become a classic along the lines of the Rolex Daytona and Tag Heuer Carerra.”

Also, I don”t want to have to dig to find out it is a Sea-Gull movement, while they talk about how the movement is “an evolution of the legendary Venus 175, a movement tracing its heritage to Switzerland in the 1950″s.”  Just come out and say it.  If you are ashamed of the movement, don”t use it.  You are not the only watch with a Sea-Gull under the hood.

But this watch led me to the larger question of, “what else is out there in this price range?”  And for those thoughts, tune in tomorrow to see what makes up Matt”s “best of” list for the under-$500 segment.