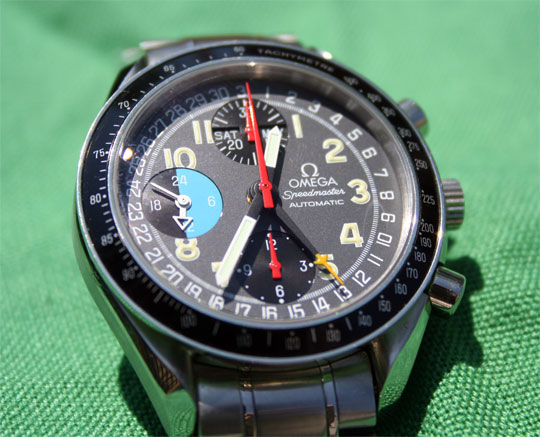 I’m an Omega-lover to my core… not sure why, but over the few years I’ve been collecting, Omega has consistently excited and invited me without putting me off with odd designs and frou-frou styling. I wear my Seamaster Pro Chrono daily, rarely swapping it for other watches, and until it breaks or pulls me to the bottom of the ocean, that probably won’t change.

That said, I also like my Speedmaster Triple Calendar. I’ve had it for about a year now and didn’t write it up simply because I’m too lazy. However, it’s a real charmer. 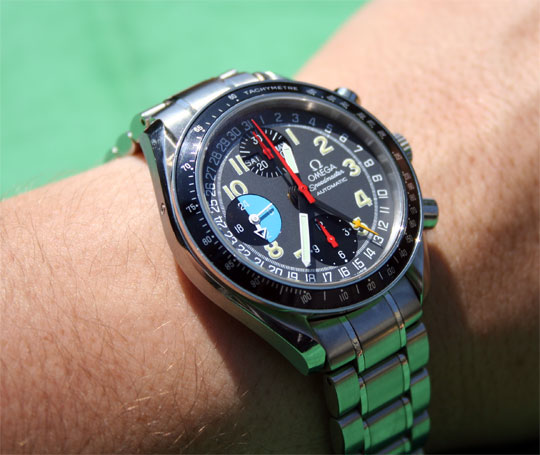 This model, known as Speedmaster Day Date (I can’t find the official designation), came from the late 1990s/early 2000s. It has a grey face and dual colored two-hour dial along with a day-month register at 12 o’clock and a fourth hand that indicates the day of the month. It’s not a perpetual calendar, so it gets a little wonky in February. It runs a modified version of the Valjoux 7751 movement without the moonphase.

The scale around the edge is pushed down, strangely enough, unlike the standard Speedmasters. This gives the entire watch a dome-shape. It has a sapphire crystal and solid back along with two pushers for the chronometer, a three position crown, and a little button at 11 o’clock to set the day of week.

Setting this watch is actually quite easy. First, you hit the right month, then the right day, then the day of week. It all changes at the 31st, so if the month is shorter you have to manually move things back or forward as necessary. I keep this watch on a winder because I never want to have to set it again.

Aesthetically, I like this style over the new, coaxial version of this watch. The newer versions stick to the traditional black/white Speedmaster coloration and, although they come in other colors, I think this coloration AND the new black/white are about tied for elegance if not legibility.

Why don’t I wear this watch every day? I’m worried I’ll break it, for one. While the Seamaster has lots of wide, curved surfaces, this watch is all bezels and corners. A few nicks in the wrong spot and you’ve got an 80% watch rather than a 95%. The clasp is also kind of chintzy. It’s a push-button mechanism hidden under an Omega symbol on the band. I had this watch very loose for a while, but I just tightened it and it feels lightly better, but it’s still not my favorite.

Overall, the Speedmaster Day Date is a great way to get cool complications at a not too shabby price. I’ve seen these fellows go for about $2000 and the movement is a real classic, offering lots of functionality on a readable dial. It’s a mid-sized watch, not huge, and this particular model is an odd tribute to the psychedelia of the 1970s while still maintaining some sense of decorum. It’s not my absolute favorite, but it’s good friend.