The Shinola Runwell – it’s not just for your wrist anymore 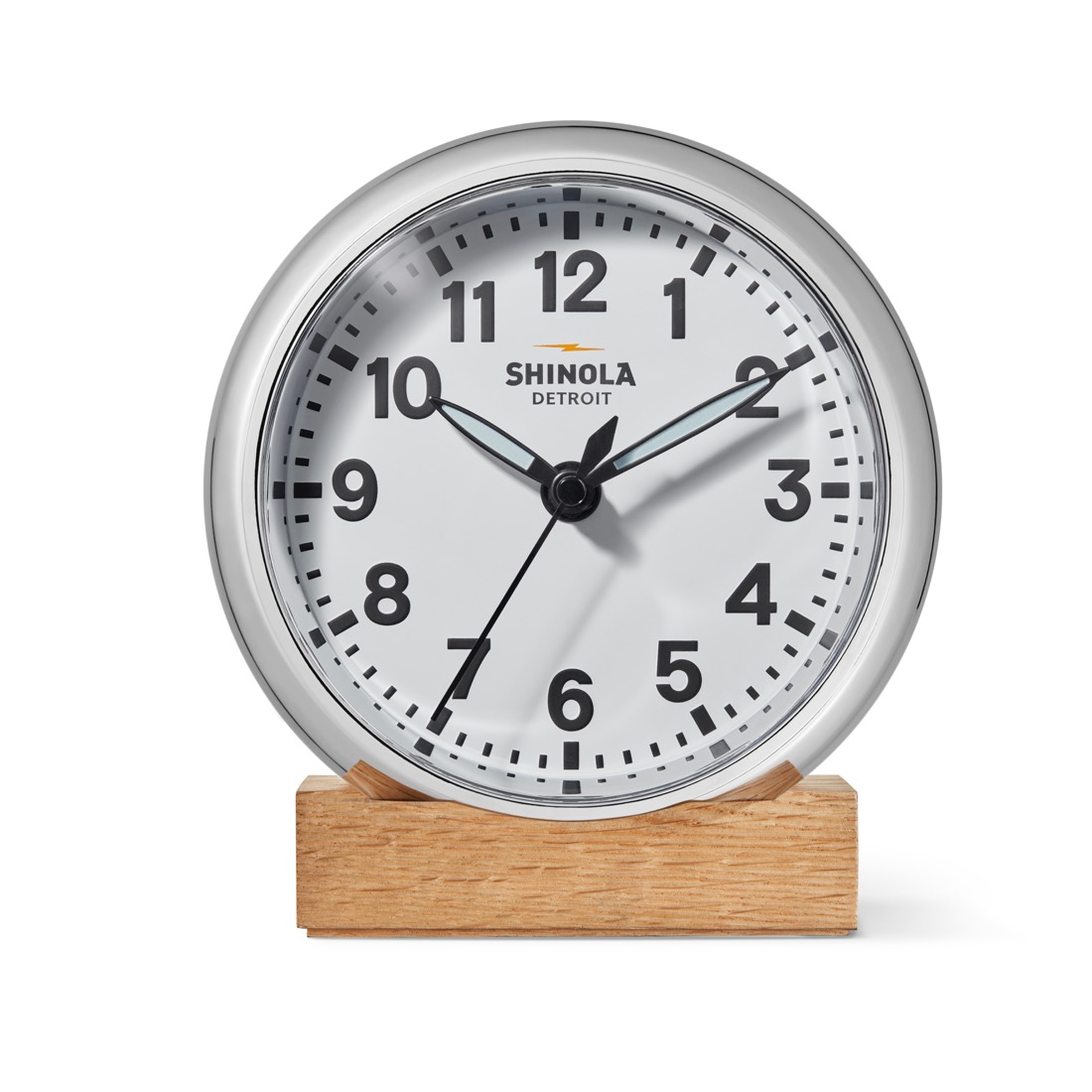 You know me – while many folks seem to want to dismiss Shinola as just another marketing story attaching itself to watches built in a city rising from a fall, I’ve been a booster for the brand. This was only further solidified when I toured the factory and saw first hand the work being done.  You’re no doubt aware that they’ve expanded past watches, and today we’re looking at another one of their diversions – the Shinola Runwell clocks.

First up, we’ve got the larger 14″ Shinola Runwell clock.  This one came into the house via the generosity of a good friend, and has been a welcome addition to the house.  When I first picked up the box, I knew I was not dealing with just another piece of chromed plastic.  This thing has some serious heft (I’ve not weighed it myself, but the spec sheet lists it as 11 lbs).  Why so heavy? Well, I’ve a few ideas.

First off, this is a clock that Shinola built in conjunction with General Electic – yet another big name in the “old school” category.  We’ve all probably seem some old GE clocks in public buildings, schools, or even homes, at some point.  This new Shinola Runwell continues that legacy.  So, to keep that rolling, they’ve cast the case out zinc.  This is another tie into the automotive industry as well, as there are a lot of cast parts made from zinc alloys (speaking from my time at a die casting company).  Chrome and polish it, and you’ve got a clock case that is got some definite presence to it.

Shift over to the dial, and this is very much recognizable as the Shinola Runwell, writ large.  I do rather like that the handset is lumed here as well, just as the watch.  I would not have minded there being lume on the numerals as well, but that’s not the case here.  How do you adjust the time? Glad you asked!  That’s done by opening the case back (via four Phillips-head screws; the 14″ clock comes with a screwdriver) and then you’re adjusting it via the normal quartz clock movement ridged wheel.  This is also where you’ll find the C cell powering the movement.

In our house, I ended up mounting the Shinola Runwell clock on the wall (making sure I had a heavy duty anchor in place).  It quickly became a part of the home, with it being a cinch to read the time quickly, even from another room.  If you’re not wanting to do that in your home, there are a variety of stands available as well, which would allow you to put the clock on a tabletop.  The 14″ clock will run $450 (in any of the colors/finishes; the Mickey Mouse variants jump up to $600), with the wooden stands adding another $80 to the price.

Now, if you find yourself wanting something that is expressly for the desk, then Shinola has you covered as well.  Coming in at 6″ and $295, the desk version of the Shinola Runwell clock also comes standard with the wooden stand (though it can be hung on the wall).  Other than being smaller and a bit more affordable, this is very much the same as the larger wall version.  With having the larger version at home already, I reached out to the brand to see about checking out the smaller version at the office.

You’ve got the same Shinola Runwell styling, a heavier zinc alloy case (in this case just 2.5 lbs), and a caseback that looks just like all of the Shinola watches I’ve ever seen.  Here again you’ve got screws to open things up (no included screwdriver with this version), with a similar adjuster for setting the time, and also where you’d replace the AA battery.

If you’re interested in the desk version, you’ll want to get over to their website sooner, rather than later.  The white and black dial versions are out of stock (though you can request to be notified when they’re back), and there is one version currently available, white dialed with a black case.

I think whichever version you select, if you’re a fan of the Runwell styling, you’ll be well-pleased.  For home, as most of our walls are a lighter color, the black dial for the wall clock stands out crisply, and of course reading the time on it is a snap.  Once it was up on the wall, it quickly became an integral part of the home.

For the office, the lighter-colored wooden base and white dial tie in nicely with the white desks we’ve got.  I never thought I’d be super-excited about a clock, but in this case, I am super keen to have these at home and at the office.  Keeps that love for watches in the forefront  (if subtly), and reminds me that Detroit – like Shinola – is on the rise.  Now to fashion a chain to hang these around my neck on… shinola.com