The Alvieri Firenze bubbles up on Kickstarter 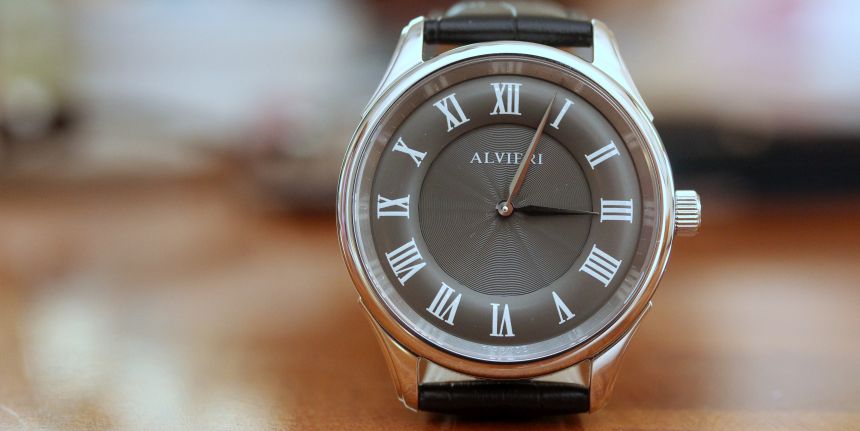 As you might imagine, we get all manner of emails coming in here at WWR telling us about new watches. While this is an invaluable stream of information, it sometimes can have a frustrating signal-to-noise ratio. Fortunately, most of those messages contain an image or two of the watch that is being introduced, and this lets us easily hone in on what is of interest to us and our readers. Even though I did not know anything about the specifications (or even the pricing) of the Alvieri Firenze, when I saw the images, I was fairly certain this would be a watch we would cover. Why is that? Well, it’s that outer ring on the dial of the Alvieri Firenze. As some have pointed out, it gives the watch the feel of a De Bethune, and I will concede that point. As it turns out, the ultimate influence may be the fully convex dials of Italian watches of the 1960s (I’ve not seen these, so I’ll take the brand’s word on this). Regardless of the influence, that convex dial is certainly eye catching. Then again, I seem to be a sucker for this sort of domed ring – usually it appears on the bezel (such as here and here), but here it’s smack on the dial.

That was not enough for the designers of the Alvieri Firenze, though. They also went with a guilloche pattern to the inner portion of the dial (which, at the pricepoint, makes me think this is stamped rather than rose engine guilloche). While you may not necessarily make out of all the tiny lines involved in that (except with a macro lens), it does make for a rather lovely sun ray pattern to the dial. These two design elements really end up catching a lot of light – even on a grey dial, as our review sample was. Also catching the light on the Alvieri Firenze are the polished sword hands. While I find that sometimes these style of hands can be difficult to pick out against a lighter dial, the grey was just dark enough that it was not an issue. The length of the hands is spot-on as well, with the hands stretching to the appropriate sides of the convex portion of the dial. These indicate against the printed Roman numerals, which are nice enough. With as much dimension as the dial itself has, these indices felt overly flat to me. I’m not quite certain how you would change this – perhaps a thicker application of paint, or applied indices sunk into the dome – but it was one small detail that sort of caught in my teeth. All of this is covered up by a sapphire crystal (quite nice at this pricepoint), and the Alvieri Firenze is driven by a quartz Ronda 513 movement. That quartz movement helped keep the weight down to only 60g, even with a 40mm steel case. Speaking of that case, it comes in at only 9mm thick. Not the thinnest ever, but one that slips under a cuff easily, while still giving a feel of refined robustness. Paired as it was to the matte leather strap, and it’s overall style, this is another perfect watch for the office, whether you dress code leans towards business or business casual. That’s where I wore the Alvieri Firenze the most, was to the office, and it blended in well. I never had any issues getting the time at a glance, and it just looked the part of a polished watch, ready for the day. Now, our particular example of the Alvieri Firenze, also known as the classic, is a simple two-hand display, and can be picked up from the Kickstarter project for $175 in one of four color combinations (dial plus case finish). There is also a more complicated version, the Lunar, that adds moonphase and date displays. This version (in one of three combinations) comes in at $199, and is powered by a Ronda 708 movement. At the time of this writing, the Alvieri Firenze had already hit 90% of it’s funding goal, with the project closing on June 16. While going with an unknown brand can be a risk (as is the concept of Kickstarter), I found the Alvieri Firenze to be a very capable, and seemingly well-built, watch in my time with it. You’ve got solid materials, a known Swiss movement, and some rather interesting styling. This all adds up to a dressier watch for the office that makes a compelling argument for itself to be on your wrist. alvieriwatches.com 52 thoughts on “The Alvieri Firenze bubbles up on Kickstarter”