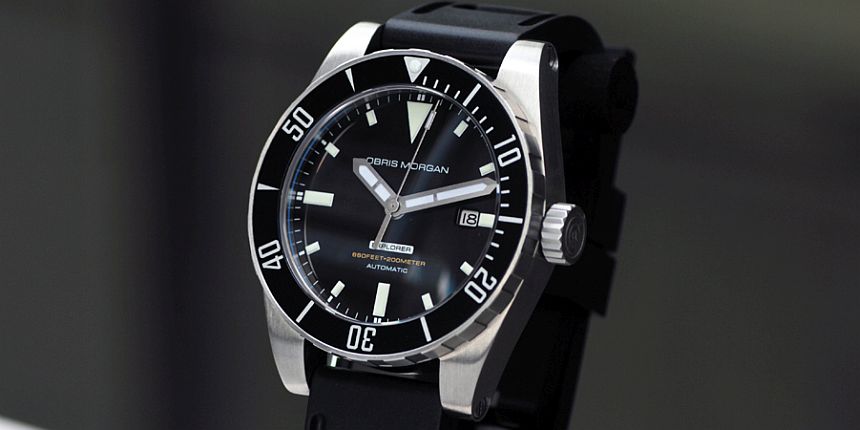 In the course of writing about affordable watches here at WWR, we very often come across new brands, and we write about a good number of them. Sometimes those freshman outings are not the greatest. The issues we see can often be overlooked given the price points that things come in at, and we call out what we see as oversights in a model. While not totally uncommon, it is more rare that we continue to be in contact with a brand, and see a marked contrast (and improvement) in what is being offered. That is precisely what we have here today with the Obris Morgan Explorer II. No, your memory has not deceived you – we have not reviewed the Explorer from Obris Morgan previously (but we have taken a look at their Flieger MN and Branco). That first model we reviewed definitely had some rough edges to sort out, and we saw improvements come when we took a look at the second review. While today’s article is not a true hands-on review (though we are working to get a sample in), from what I am seeing in the photography and the spec sheet, that positive trend has continued.

As you might expect from the name, the Obris Morgan Explorer II pulls design reference from the Rolex Explorer (rather than the more-commonly copied Submariner, for which I am thankful). For those unfamiliar with the original Explorer, you are greeted with sturdy steel case (42mm by 12mm thick) topped with a 120-click unidirectional bezel and a double-domed sapphire crystal. In other words, a sturdy sport watch that will not look out of place in the office. The most recognizable design influence is of course the large triangle applied on the dial at 12 o’clock. The remainder of the dial features applied stick indices, and printing on the lower half of the dial that definitely calls to mind the Rolex way of getting text on the dial.

The handset used on the Obris Morgan Explorer II definitely has more of a diver feel to it, and that makes some sense, as the watch itself has a 200m WR rating, courtesy of the new Viton gasket on the caseback and the screwdown crown. Oh, yeah, and also helped along by the automatic helium escape valve which will never be activated by any owners of this watch. But, it’s there and I suppose makes the watch feel a bit more robust. For my money, though, I’d drop the HEV to simplify the case (and likely reduce some cost), and focus on something else, such as a fully-lumed bezel insert. Yes, there is a tiny lume pip in the triangle on the bezel, but that’s about it. While this is certainly providing a level of functionality (in terms of tracking elapsed time), it is something of a visual treat to see a fully-lumed bezel insert, especially when paired to a watch like the Obris Morgan Explorer II with rather large (and lumed) indices. Certainly not a deal-breaker in any stretch of the imagination, especially given that most of the diving the Obris Morgan Explorer II will be doing will be at a desk. Just something for the crew to consider in further iterations. And who knows – judging by how far things have come along, I certainly would not be surprised to see a lumed ceramic bezel insert getting into the mix.

Even if that does happen, whether on a new iteration of the Obris Morgan Explorer II or on some other watch from the brand, I am all but certain they will deliver the watch at a very attractive – read: affordable – price point. Four varieties of the Obris Morgan Explorer II are available at a price of $279, with the other five in the lineup only adding another $10 to the price. The variants have some subtle differences, which show up in the bezel and dial color (black or blue), as well as the color of the ink some of the printing on the dial is done in. When you consider that the pricing for Miyota 9015-driven Obris Morgan Explorer II also includes shipping and the steel bracelet (as well as a rubber strap), well, you are set up for one very attractive watch. Is this a particularly innovative design? No, it’s not – but then again, that is not what people are looking for in a dive watch, especially at this pricing level. That is not to say that the watch is bland, as it does offer a slightly different case configuration (seen primarily in the profile), especially when paired with how the bezel rises up from the case. It’s also switched around enough that it does feel like it’s own watch (as much as one with these sorts of influences can be) rather than being an outright copy of the originals. For my money, the Obris Morgan Explorer II is a solid offering and good value, and we will be working to get one in for some hands-on impressions. obrismorgan.com