Atticus Pytheas is a watch for adventures into the unknown 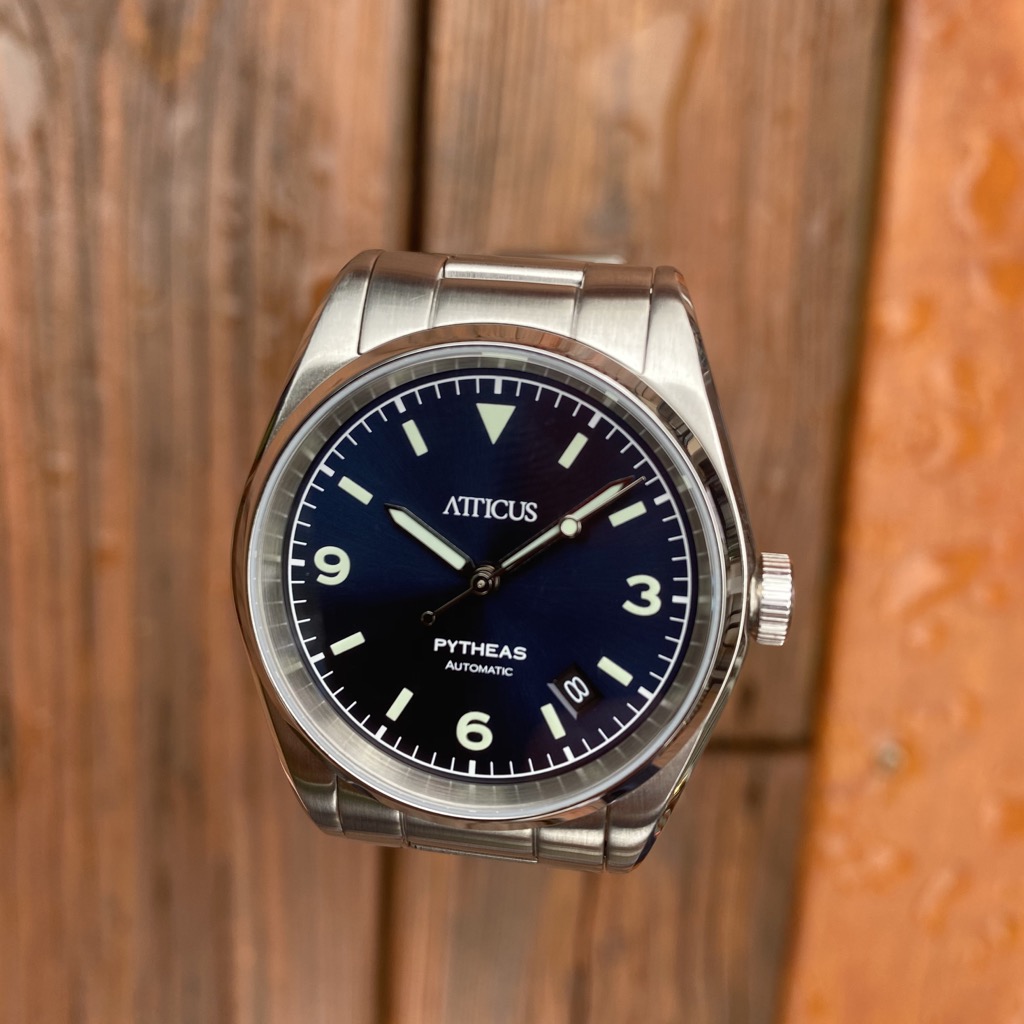 And that’s what the Atticus Pytheas provides.

Atticus is neither the first, nor the last, to make a simple sport watch for the field. What makes it interesting is the quality of execution and choices made.

Getting this out of the way: You may notice similarities between Atticus Pytheas and watches like the Rolex Explorer. In fact, Atticus calls this the “Adventure Series”.

We can also compare it to other watches based on the Explorer, like the Manchester Watch Works Iconik 2, a 39mm reinterpretation of the old Rolex Explorer 6350.

The Atticus Pytheas uses a dial with 3-6-9, with a triangle indice at 12. The triangle is equilateral, like a 1954 Submariner 6200. The triangle for the 1016 Explorer of the same time is narrow, and longer. It shares a minute track ringed by an outer circle.

The numerals for Pytheas are more similar to a Sinn than they are to either The Rolex 1016 or 14270 Explorer. The Pytheas uses a case more similar to the 14270, with a dial that inherits some of its traits from 1016, 6200, and that more Sinn-like engraver’s typeface numeral.

The bracelet for Atticus Pytheas is a unique not-quite-an-Oyster bracelet, that adds a thin horizontal element to the links. This element disappears as soon as you get to the removable links that adjust the bracelet size. The end links of the bracelet are solid, rather than folded hollow links like they would have been in the 1950s, the decade Pytheas takes influence from.

Pytheas is a comfortable 38mm, upsized from the 1950s 36mm, and not as large as the current 39mm Explorer. The difference of a single millimeter doesn’t sound like much, but the Pytheas retains a more vintage appearance by keeping the bezel width narrower than the modern version.

Should you get one? Let me break it down like this: I liked the case size, shape, and proportions of the bezel. I like the blue dial and date well enough. Among things I am less a fan of, the bracelet’s jarring transition from links with a horizontal element to links without.

The Atticus Pytheas is available at pre-order now for $400, significantly less than its in-stock price of $675. The movement inside is a Miyota 9015 that allows it to be as thin as it is. I strongly suggest you get one from atticuswatch.com.