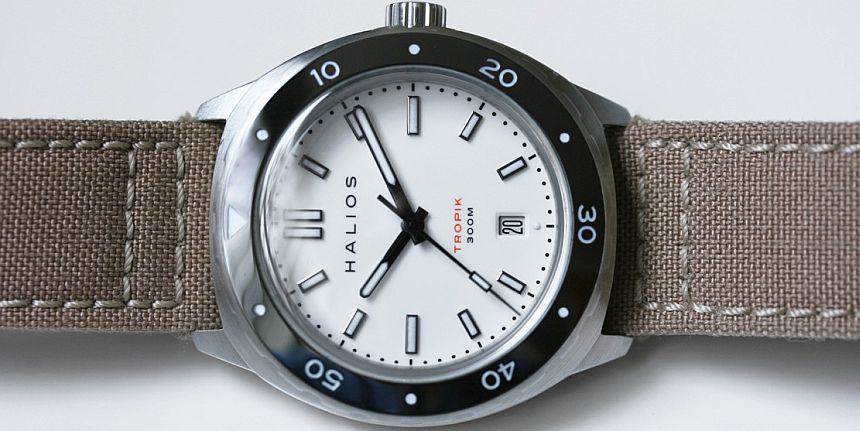 Sometimes, it certainly can feel like you’re trying to drink from a firehose when it comes to keeping up with all the indie watch brands on the market these days. Even if you limit yourself to a single type of watch (for instance, divers) and shy away from those mushrooming up on Kickstarter, you are still left with an embarrassment of riches. This also means that, for us here at WWR, we can sometimes overlook a particular brand or watch. Vancouver-based Halios is one of those brands. For whatever reason, they were in my periphery, but I never focused in on them. That is, until I caught sight of the white-dialed Halios Tropik.

Of course, the Halios Tropik is not a new model by any stretch, and I had seen photos of the blue-dialed version before from James Stacey. While I do find myself picking blue as my favorite color, the blue dial Halios Tropik really was not doing it for me. When I saw the white dial version, which will be available later this year, they had my full attention. This is partly due to the draw I feel to this particular dial shade. More importantly, though, was the association it made in my mind. When I saw the white-dialed version of the Halios Tropik, it immediately called to mind the Michelsen Arctic Explorer. Now, those two watches are rather different, both in terms of functionality and execution. That said, what grabbed me about the Halios Tropik is something that I have really come to appreciate on my Michelsen Arctic Explorer – the crisp relief of the raised (and outlined) indices standing out against the white dial. Add in the black (and lumed) handset, and these watches are definitely cousins in my book. Mix in the option for a full stainless steel bezel (as I have on the AE) and the resemblances are there. Perhaps not familial, but in the sense that two random (and unrelated) strangers on the street can share very similar looks.

No, the Halios Tropik will not be mistaken for the Michelsen. What it does, however, is take a basic sort of theme of the watch, and turn it from an everyday world traveller, to an everyday diver. I am not about to say that one is better than the other, as that boils down to personal preference. As I find myself reaching most frequently for the Michelsen when it comes time to pick out my watch for the day, I could very easily see the Halios Tropik fulfilling a similar sort of role, giving a subtle change of pace to the wrist. In the photos, the 41mm Halios Tropik looks relatively compact, which does belie the 14mm height. In other words, once you have the watch strapped on, you would be hard-pressed to not recognize that the Halios Tropik is a diver, complete with a 300m WR rating. They have also opted for a domed sapphire crystal (with AR on the underside), rather than a flat crystal, which gives the watch that much more of a distinction in my book. What do we have ticking away inside? Well, while the watch itself stands out from other indie divers, the choice of engine does not – it’s the Miyota 9015. Not that that is a bad thing. No, the pervasiveness of the movement I think speaks to a vote of confidence, as well as (I hope) ensuring that watchmakers will be familiar with maintaining the movement as time goes on.

Coming in at a price of $650 (plus shipping), the Halios Tropik is a rather compelling diver. Of course, I am not actually a diver myself, so I am going based solely on the looks, as well as the basic robustness you get from a dive watch. While I myself have not seen one in person, I have heard good things about the watch (and the brand) from those who do own one. If you find yourself wanting to join those ranks, definitely keep tabs on the brand’s site. The Halios Tropik is not currently available, but should be later this year. Once released, the run will be what it is (no open-ended production) so it seems like something you’ll want to get in on when you can, as it may not come around again. I don’t know, perhaps that is some of the appeal to me, that uncertainty or rarity around the watch. That’s neither here nor there, though.

Be sure to let us know in the comments what you think of the Halios Tropik, or any of the other watches in their collection. Especially if you own one, as I am interested in hearing more feedback from those who have spent time with the watches. Past all that, as I mentioned at the outset, we sometimes miss brands or particular models. If there’s one that you think we have overlooked, or would just like to see our opinion on, feel free to drop us a line. halioswatches.com