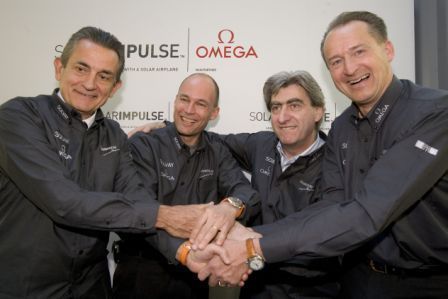 If you thought Virgin’s Richard Branson had huevos of steel, you should see what Nick Hayek and Stephen Urquhart are going to do. The CEO of Swatch and President of Omega, respectively, announced Omega as the sponsor of SolarImpulse project. The purpose? To fly a plane around the world in a plane powered only by the sun.

The SolarImpulse challenge consists in conceiving an airplane capable of taking off autonomously, then climbing to an altitude of 12,000 metres, and maintaining its flight for several days with no fuel, propelling itself by means only of the solar cells mounted on its wings. In addition, it will have to use the energy accumulated during the day, not only to maintain its flight, but also to recharge its batteries and to ensure its flight at night. The pilot must ensure that each evening his batteries are full and that he maximises the available energy to stay aloft until the following dawn.

I suppose if I were stinking rich I’d be doing crazy stuff too.