The McDowell Time Delray is a military watch with vintage style 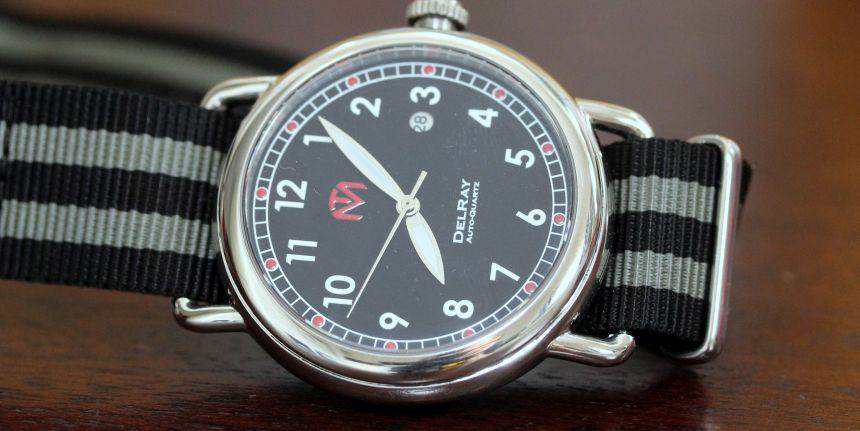 The other week, we brought you a preview of the McDowell Time Delray, and I teased the fact that we had a prototype in for review.  Well, the teasing is over, and it’s time to give you our hands-on thoughts.  I still rather like what I see; then again, going with what seems to be a popular style (vintage military in a modern design) is a solid way to go, especially for a brand just starting out. With that in mind, let’s see what the McDowell Time Delray has on offer. Now, if you are like me, or have a better memory than I do, you will recall we reviewed a watch rather similar in style to the McDowell Time Delray, and that was the Manchester Watch Works Vergennes. I reached out to MWW for their thoughts, and they did admit that there were some similarities. When we asked McDowell about this, they did state that they were aware of the MWW watches, and did make them reconsider the design. In the end, it does not seem like anything nefarious was going on – just a basic idea from two places that resulted in similar looks. Now, if this was a blatant ripoff, then yeah, I might look at this a bit less unfavorably. Given the response we had from both brands on this, though, I’m inclined to be more charitable with regards to the design, and simply call it another variation of a proven, popular design.  Neither brand harbors any ill-will towards the other.  So, the winners here are us – more trench watches for everyone!  So, enough of drawing comparisons, let’s get into what the McDowell Time Delray has going on for itself.

For starters, the McDowell Time Delray has a movement that I have never experienced before, the Seiko YT57. This is a quartz movement, but it also has rotor, which is visible through the exhibition caseback of the 44mm case. So, much like an automatic, your movements throughout the day power the watch. Rather than winding a spring, though, that energy is stored in a capacitor, which then powers the movement. This is a good idea in principle, I will admit. In practice, though, I found it falling a bit short. This is because of the power reserve. Unless you wear a watch with this movement regularly (or perhaps have it on a winder) the capacitor will run down quicker than you might think. Fortunately, the McDowell Time Delray gives you an indication of low power, when the seconds hand starts stutter stepping. That means it’s time to start shaking the watch, as you cannot wind it at all via the crown. Now, you might say this is really no different than what you get from a mechanical, and you would not necessarily be wrong. While the inclusion of the Seiko YT57 certainly gives the McDowell Time Delray a bit of a novelty factor, the easy loss of power sort of negates the accuracy that you might otherwise expect from a quartz movement. For me, if there’s a rotor, I’d rather the quartz crystals were left out of the equation. On the dial side of the McDowell Time Delray, there is that great, easy-to-read layout that is a hallmark of sorts for this new vintage watches. On the same we were loaned (with the black dial), the indices and numerals are in white – as is the filled handset – which stands out in stark contrast. Adding a bit of variety in you have some red accents coming in, via the logo at 12 o’clock, as well as the hour indices within the train track chapter ring at the outer edge. While I cannot say that this is the proper name (or terminology), it gives the whole thing a sort of casino chip look and feel, which just feels right on the dial. Our McDowell Time Delray loaner came on a standard nylon NATO which slips through the lugs easily. As we have seen on other modern “wire lug” watches, there are modern spring bars used, which means you can slip just about any strap on that you might like (unlike, say, on the WT Author watches). As a daily wear sort of watch, I found the McDowell Time Delray to be an able companion. It definitely has more of a casual feel to it due to the nylon strap, but the Kickstarter-backed ones will come standard with leather straps, which should give them a more versatile look (and frankly, you can get an inexpensive NATO easily enough). Being as the McDowell Time Delray is launching on Kickstarter, there are deals to be had for early backers. Earlybird pricing starts at $250, for which you will get your choice of dial color (blue, black, or white) and case finish (polished or PVD). The project just launched on April 26th, and will wrap up on May 26th; funding is at 60% as of the time of this writing. I find the McDowell Time Delray to be an interesting watch, and the movement is a bit of a curiosity. Is it enough to get you to jump in on the project? Let us know in the comments! mcdowelltime.com