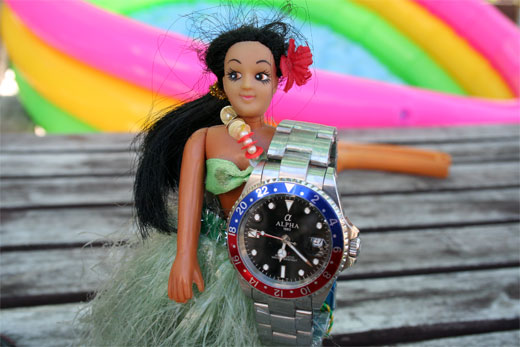 Here we go. Here are 5 great posts by 5 great readers on why they deserve an Alpha GMT. Please vote on your favorite after the jump.

I believe an Alpha GMT will help me transform the world’s opinion of Americans. Many view us as being self-absorbed, ignorant narcissists. I say: not true!

For too long, the oceans have cut us off from other parts of the world in a way unfamiliar to Europeans and those of other cultures, such as Sri Lanka. We Americans need only deal with a few time zones, but there are so, so many more. How can I empathize with the Madagascarian plight, if I cannot instantly know the time in said African nation? The Alpha GMT will enable me to instantly discern the time in any country that I choose, even California. I will then be able to use said horological knowledge to increase awareness of the aforementioned country of my choosing, acting as a emissary of good will, etc., etc. Over time, Americans will come to be known as charitable, giving, caring, altruistic, genuine, involved, and charitable. All because of the Alpha GMT.

My goals are so much more lofty that merely wishing to avoid waking others from a sound slumber.

In 1943, I was abducted by a UFO while flying in formation over Carentan, France. Most of my squad was destroyed by the huge gravity wake generated by the alien craft, but I was taken aboard.

I was experimented on, examined, probed, and eventually left in stasis in a forgotten bay of the craft. I drifted in and out, only vaguely aware of the passage of time. Given the time dialation effects of faster-than-light travel, my return to Earth did not coincide within the natural confines of my lifespan.

In 1989, I found myself deposited in a field in Iowa, hazy, nauseous and only barely able to comprehend what had happened to me. I began to search for my squadron in vain, having believed we were the victims of a Luftwaffe ambush. Imagine my surpise to find that over 45 years had passed since my time in the Air Force!

Finding it impossible to fit into this new world, I descended into alcoholism (like my father before me) and walked the streets of Iowa City, homeless and hopeless. My only companion was a midget named Oscar, but everyone called him Frank. Oscar encouraged me to seek help for my alcoholism and I eventually sought the aid of a hypnotist.

Through many sessions (paid for in menial labor around the doctor’s office), I was able to recover many of my memories aboard the spacecraft, as well and their future plans for our planet.

Reclassifing Pluto, it’s moon and other bodies on the outer reaches of our solar system are only the first step in annexing that portion of space. Eventually, they will move towards Earth, claiming to come in peace.

My friends, I warn you NOT to trust these new visitors. They have devious plans afoot and I can’t help but chuckle at the irony of an old pilot like myslef being the one to deliver the mesaage of warning to our race.

And that is why I need a sweep GMT hand.

Watch the Red Hand Go Round

As we all know, everyone neeeds one of these so you can watch the red hand go around at half the speed of the pointy mercedes thing. Alternatively it’s really handy for those who keep forgetting what happens when you run out of fingers and toes while counting. This thing goes up to 22 and a big arrow!!!!!
What more could you ask for.

My dad’s currently in hospital in the UK (where I’m from). I’m on the East coast of the US and have recently started a new job which keeps me crazy busy. Between one thing and another I would love a way to simplify checking when its ok to call; visiting hours don’t start till 2pm GMT, so I can’t call before then, I don’t want to call too late and wake him up. This would truly help me keep track of the time difference.
Thanks

Because I haven’t got any sort of wristwatch, regardless of which timezone I’m in I constantly feel jetlagged because I never know what time it is. Am I making sense? I think I need to lie down…

Ten years down, and presents for you