Techné and the UTC Harrier for Air Traffic Controllers 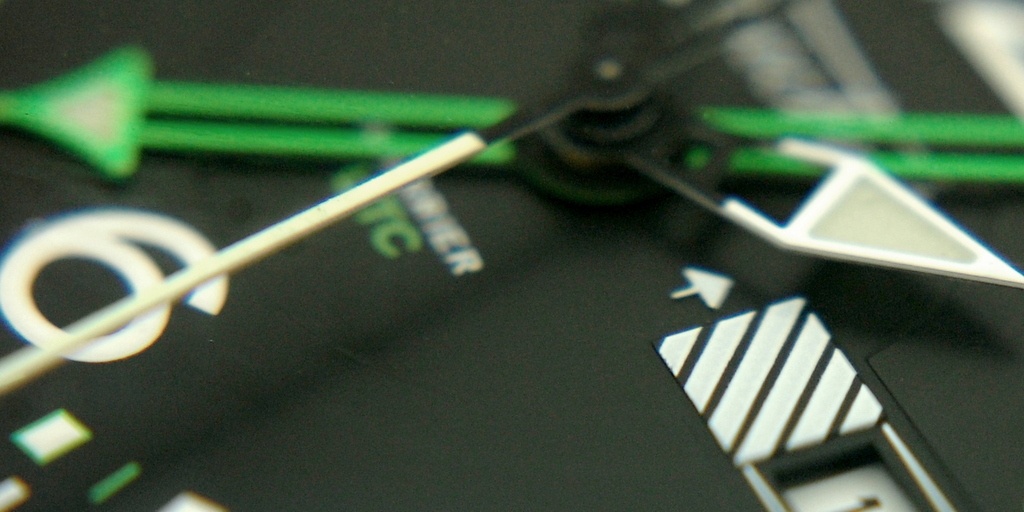 The Harrier UTC Carbone TE-368 is quartz powered, proudly declaring on the dial the use of a Ronda movement. It’s got a green UTC hand that’s only solid at the center pinion and it’s arrow head. This mimics the hand of the radio magnetic indicator gauge on older aircraft gauges. The hour and minute hands are very similar to those used on gauges of this sort. The date window is nice and large, and has hashmarks next to it like those on the 6 o’clock position of the old altimeter gauge. There’s also an up arrow to the left of the marks. On the gauges these marks indicate low altitude. Different sources give different altitudes at which the marks appear on the gauges, below 10k feet, below 15k feet, depending on manufacturer. Another manufacturer uses them to indicate above 0 feet – to help tell the difference between -1000 and 10,000 feet. The point of these marks is to avoid the errors of reading the gauge. The reason I bring this up is, the dial is complex, with lots of decoration. Air Traffic Controllers need to be able to see information quickly. You’d think the dial would be decluttered, if Techné’s pitch were at all serious. Get rid of the hashmarks next to the date window, extend the 24h hand to the edge so that it points to the hour it’s meant to indicate, rather than to a marker inside the minute track, and then declutter by getting rid of the marker that the 24h hand barely reaches to currently. What I’m suggesting here is, pilots never looked at such a cluttered gauge when flying, and actual air traffic controllers need information to be legible quickly – they’d use a clock. If they’re going to use this watch as the PR suggests, make the watch easier to read. There’s just too much going on here.

The case is a 41mm BPA-nylon with carbon reinforcement. It’s equipped with a sapphire crystal. The back, crown, stem, and buckle and pin on the strap are stainless steel. The strap is a yellow-gray leather, and the watch is water resistant to 100 meters. Did I say, ‘the watch’? There’s a second watch. The TE-367 is a 3-hander using the Ronda 515 quartz movement. Here, the dial is a little less cluttered, not having the 24 hour numerals at the periphery, or the 24 hour indices inside the minute track. The hashmarks borrowed from the altimeter are still present, and the up arrow is still present. This watch formerly was made as a different Techné model, which had an anti-gang symbol at the 9 position. Here, it’s reborn as the Harrier QUARTZ. It’s not terrible, but it’s also not inspiring. We know it’s a pilot watch from the handset shape, and the large numerals, much like a SINN might use, and I don’t need the altimeter hashmarks and up arrow crowding the hands.

Update: Techne responded, letting me know that the Harrier UTC was designed in cooperation with an air traffic controller, and that together, they drew inspiration from historic gauges. The up arrow next to the date window serves a purpose: to let the wearer know which way to turn the crown to adjust the date, rather than the UTC hand. Techne also wanted us to know that the case is BPA-free nylon with carbon fiber, should little mouths get ahold of the watch. As a parent, and someone who’s made CPSIA-tested  products intended for children in the past, I get it.