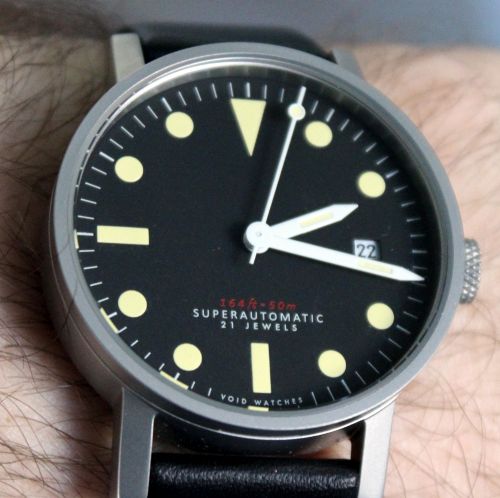 Not too long ago, we brought you word of Void’s first automatic watch, the V03M (right here). At the end of that article, we mentioned we were working on getting in a review sample, and this is the day we deliver on that effort, with our hands-on review of the little guy. I’m calling it the “little guy” for a few reasons. First and foremost, it’s due to the size of the steel case, which is a surprising (for this day and age) 36mm. The other reason I’d have for assigning that appellation is due to the fact that Void is a smaller brand, and I think WWR has always been a great place to showcase what the smaller brands have on tap. Given that we did a sort of overview and rundown of the specs in our earlier writeup, I’ll go ahead and get right into the wear test impressions. As you might expect, when you strap this watch on your wrist, it feels a lot different. Visually, it was perhaps a touch small for my wrist, but not by much (and much of that is personal preference). Interestingly, while the V03M is only 12mm thick, it looks taller than that, just because we’re comparing it proportion to the diameter. Fortunately, “looking tall” doesn’t cause any real issues with slipping under a shirt or jacket cuff. The watch is held in place by a thinner leather strap that is soft and conforms nicely to your wrist, and it’s an appropriate width given the size of the watch. With it’s matte finish, it nicely complements the flat black of the dial. Flat (or matte) really is the overall tone of this watch, when you take a broader view. The only shiny surface to be found is the (MATERIAL?) crystal – past that, you’ve got a blasted finish on the case, and no shiny elements on the dial whatsoever. I personally liked the overall theme of the finish, and thought it made for a cohesive watch. With the dial, though, I had a mix of elements that I thought worked well, and others that could stand some improvement. First off, I liked the large (and lumed) indices on the dial. Even though these don’t add any dimensionality to the dial, they worked well for telling the time, and add a bit of boldness to the little watch. This is of course done in conjunction with the handset, which shows up here in a bright white. Now, this bright white does make it a snap to tell the time at a glance against the black dial. Thematically, however, I would’ve liked to see it show up in the same vintage color that the indices used. I would also have liked to seen better lume application. In my earlier writeup, I had a feeling that the area dedicated to lume on the hands was a bit on the small side, and wrist time confirmed it. Yes, there is lume and you can tell the time in the dark. In contrast to the indices though, it’s positively tiny, and the eye is drawn much more quickly to the larger elements. With the handset, I think a few changes could really bring the level of this watch up – as would a change to the date wheel. Here, swapping out the white date wheel for a black one would certainly make for a sharper dial. All of these elements were driven by a trusty Miyota movement (the 8215), for which I had no issues with during my time with the watch.

In the end, I stand by my initial summary of the V03M – it’s a great (literally) little watch with classic styling. Coming in at a price of $490 in either the blasted or PVD finishes, it’s an eminently affordable automatic as well, ready to hop on the wrist of someone looking for a piece that bucks current size trends. As their first automatic, its an interesting direction to take, and I’m curious to see what may come next. companyurl

And that grey denim showing up in the background? From the team over at Gustin, of course!